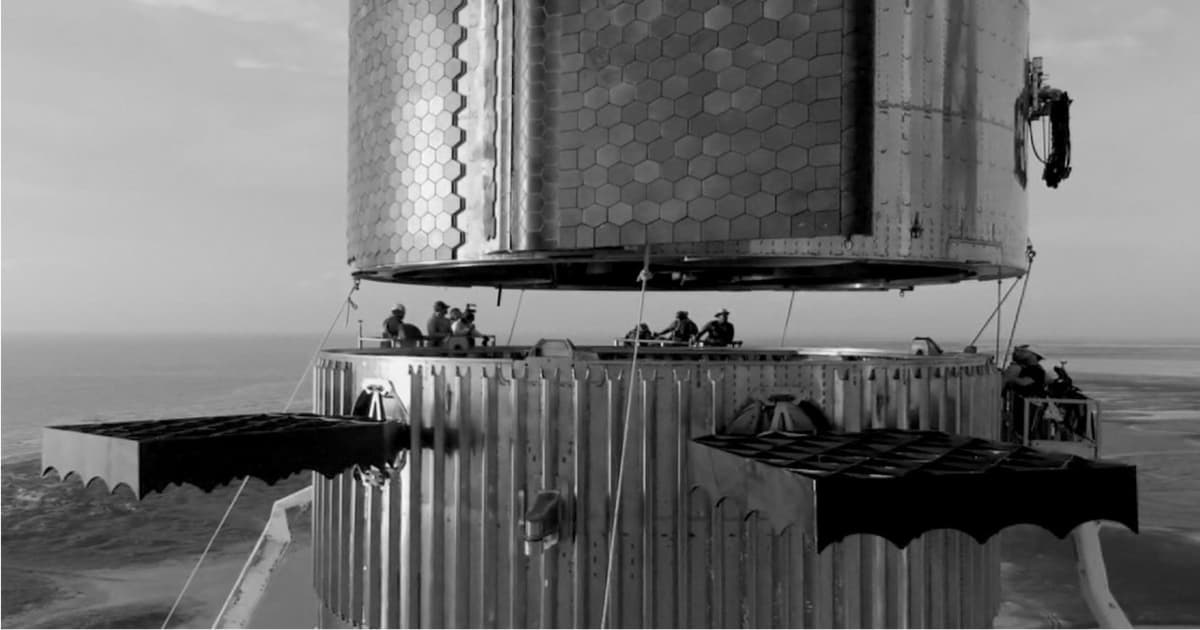 It's drawing comparisons with another iconic photo.

It's drawing comparisons with another iconic photo.

Elon Musk tweeted out a photo of the SpaceX Super Heavy Stack being assembled on Friday that showcases the dizzyingly immense size of the rocket.

The photo itself depicts the Starship prototype 20 being lowered atop the Super Heavy booster at Boca Chica, Texas. Around it are engineers working on the rocket before Starship is completely lowered, giving you a true sense of the massive scale of the Super Heavy Stack.

While the photo is impressive in its own right, it instantly drew comparisons to the iconic Lunch atop a Skyscraper photograph of construction workers taking a break across a steel girder high above New York City.

How it How it’s
started: going: pic.twitter.com/5OtTrW0gK5

When you include the orbital launch stand, the stack stands at a staggering 475 feet tall — easily making it as big as a skyscraper. It’s also the tallest rocket ever assembled, as reported by TechCrunch.

The Super Heavy Stack is a part of SpaceX’s plan to launch the first orbital test of its Starship platform. This is a crucial step in being able to send humans to the Moon as part of the Artemis project — and eventually, colonizing Mars.

If you’re wondering when you’re finally going to see the Super Heavy Stack takeoff, you’d be smart to dampen your expectations.

The giant stack is slated to be disassembled for more tests before being reassembled again for its actual launch. The Federal Aviation Administration is also still conducting an environmental review before the approve (or deny) the test launch, according to CNBC. That process could potentially mean months of waiting.

If and when it’s approved, though, it’ll mark a massive milestone for SpaceX and bring us all a big step forward to space colonization.

Thanks Man!
After Sexual Allegations, Elon Musk Jets Off to Brazil
May 20
Read More
Wait Wait
Elon Musk Has a Ridiculous Excuse for Why He Suddenly Doesn’t Want to Buy Twitter
May 17
Read More
Musk Gonna Musk
Experts Say That Elon Musk Has No Idea How Math Works
May 16
Read More
+Social+Newsletter
TopicsAbout UsContact Us
Copyright ©, Camden Media Inc All Rights Reserved. See our User Agreement, Privacy Policy and Data Use Policy. The material on this site may not be reproduced, distributed, transmitted, cached or otherwise used, except with prior written permission of Futurism. Fonts by Typekit and Monotype.