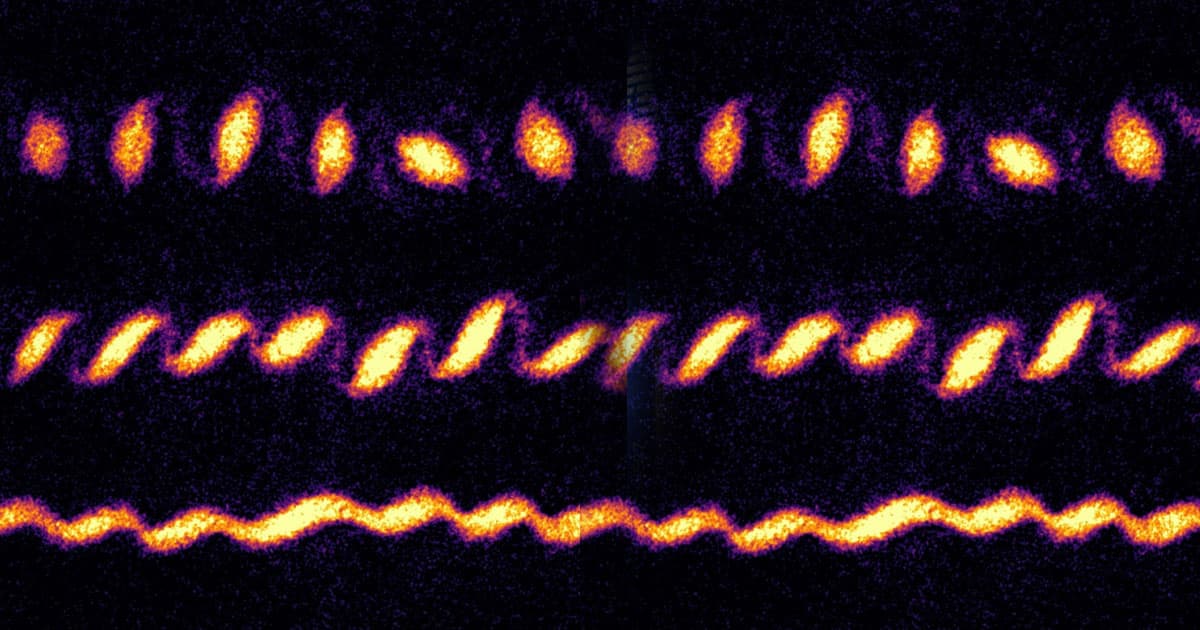 We're not in Kansas anymore...

We're not in Kansas anymore...

Scientists at the Massachusetts Institute of Technology have taken an image of what it's like to cross between worlds — well, sort of.

As detailed in a new study published in Nature this week, the team captured images of super-cold atoms in the process of switching from being governed by classic and quantum physics. The idea was to freeze them in place in order to observe their interactions and behaviors on a quantum level.

As they made the transition, the string of particles devolved into a pattern of "quantum tornadoes" — a vivid and fascinating glimpse into the quantum world.

In the quantum world, particles don't have a set location like you and the objects around you. Instead, atoms are governed by the eerie principle that a particle’s given location is a probability. An atom has a chance of being in two locations at the exact same time, so the typical rules of physics don't apply.

"This crystallization is driven purely by interactions, and tells us we’re going from the classical world to the quantum world," said Richard Fletcher, assistant professor of physics at MIT and co-author of the study, in a statement.

When particles interact this way they should display odd behavior, but observing quantum mechanics while operating in the "classical" world isn't exactly easy.

To get past this limitation, MIT scientists rapidly rotated a quantum fluid of ultra-cold atoms. Initially, the round cloud of atoms formed a thin, needle-like structure.

When quantum mechanics began to take over, the needle broke into a crystalline pattern of the miniature quantum tornadoes. The results are the first direct documentation of a rapidly-rotating quantum gas evolving, according to the research team.

"Even in classical physics, this gives rise to intriguing pattern formation, like clouds wrapping around the Earth in beautiful spiral motions," said Martin Zwierlein, MIT physics professor and co-author, in the statement. "And now we can study this in the quantum world."

Can't Even
Scientist Behind Venus Life Claim Describes It as "Crazy"
9. 15. 20
Read More
Dr. Strange
Scientists Observe "Time Crystals" Interacting With Each Other
8. 17. 20
Read More
Dark Matters
MIT Team "Accidentally" Invents Blackest Material in Existence
9. 13. 19
Read More
+Social+Newsletter
TopicsAbout UsContact Us
Copyright ©, Camden Media Inc All Rights Reserved. See our User Agreement, Privacy Policy and Data Use Policy. The material on this site may not be reproduced, distributed, transmitted, cached or otherwise used, except with prior written permission of Futurism. Articles may contain affiliate links which enable us to share in the revenue of any purchases made.
Fonts by Typekit and Monotype.