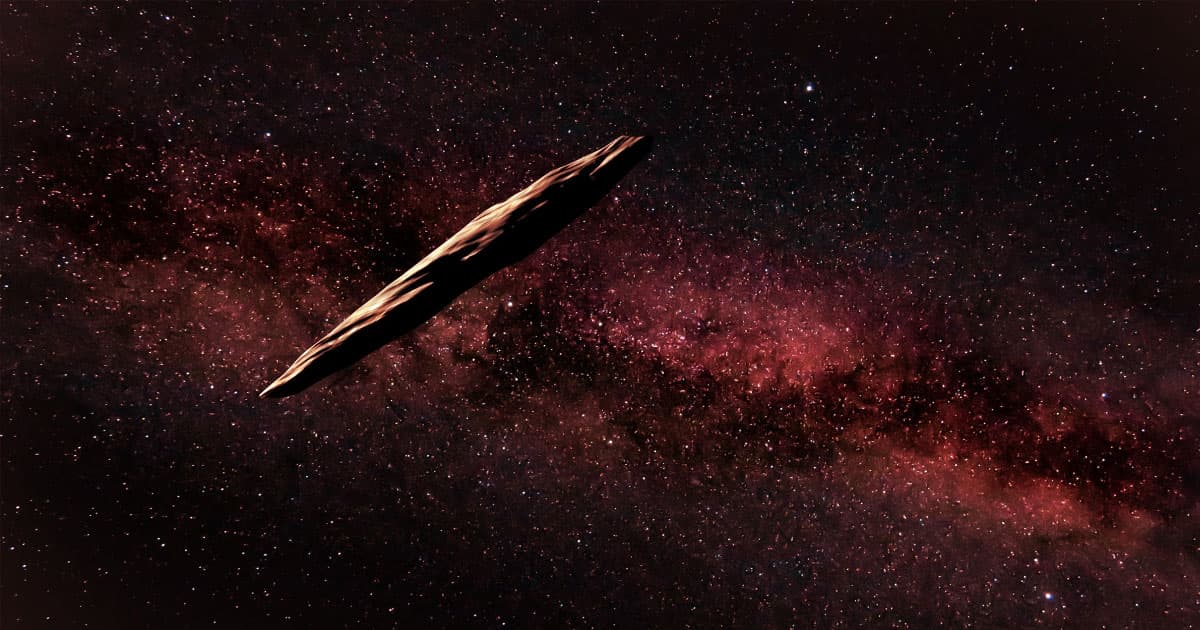 Scientists Propose Mission to Catch Up With Mysterious Interstellar Object

It would take around 26 years.

It would take around 26 years.

The interstellar object 'Oumuamua has fascinated and puzzled astronomers ever since it was first detected four years ago — and now some are itching to get a closer look.

Getting a closer look could forever change the way we understand the universe around us, they argue, a tantalizing opportunity as rocks like 'Oumuamua are exceedingly rare.

That's why a team of researchers from the UK-based nonprofit Initiative for Interstellar Studies is proposing to whip a spacecraft around the Earth twice, then Venus, and finally Jupiter to gain enough momentum to catch up with the unusual rock as part of a mission dubbed Project Lyra. After launching in 2028, the goal is to rendezvous with 'Oumuamua around 26 years later in interstellar space — a massively ambitious task, but also one with immense potential scientific payoff.

Scientists have proposed a number of different hypotheses as to what the oblong 650-foot object is actually made of.

"Theories to explain the nature of 1I/’Oumuamua have included a fractal dust aggregate, a hydrogen iceberg, a nitrogen iceberg, an alien solar sail, fragments of a tidally disrupted planet, and so on," the Interstellar Studies team wrote in a recent preprint about their proposal, spotted by Forbes.

But we won't know for sure until we get to see the object for ourselves.

The time is to start planning now, as rocks like 'Oumuamua — which is unique even among other interstellar objects — don't come to visit very often.

"We now know such a mission, at least in principle, is achievable," co-author Adam Hibberd, who developed the software for the project, told Wired in 2020. "The possible scientific return would be tremendous and might fundamentally alter our understanding of our place in the universe."

READ MORE: NASA To ’Oumuamua? The New 22 Year Mission To The Extraordinary Object Said To Be An ‘Alien Solar Sail’ [Forbes]

Avi Update
Harvard Professor Defends Claim That Alien Spacecraft Cruised Through Solar System
9. 14. 22
Read More
Aquatic Aliens
Experts Puzzled by Harvard Scientist Looking for Alien Wreckage in Ocean
9. 2. 22
Read More
See Ya Later
Scientist Proposes Using Entire Planet as Spaceship to Different Star System
6. 1. 22
Read More
+Social+Newsletter
TopicsAbout UsContact Us
Copyright ©, Camden Media Inc All Rights Reserved. See our User Agreement, Privacy Policy and Data Use Policy. The material on this site may not be reproduced, distributed, transmitted, cached or otherwise used, except with prior written permission of Futurism. Articles may contain affiliate links which enable us to share in the revenue of any purchases made.
Fonts by Typekit and Monotype.