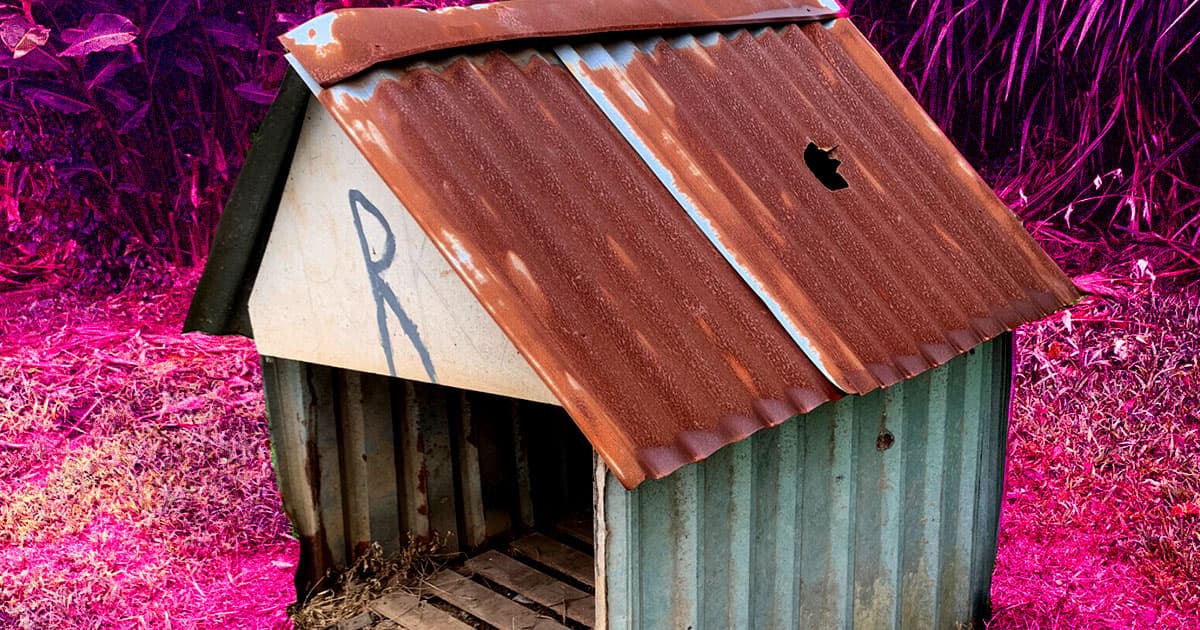 A doghouse with a seven inch hole in its roof is being auctioned at world renowned auction house Christie’s.

That’s because the hole was created by a meteorite, which barely missed Roky, an unsuspecting German shepherd living in a small Costa Rican town.

“Part of a shower of exotic stone meteorites loaded with organic compounds, crashed through his doghouse, barely missing him,” reads Christie’s description of the doghouse. “The formal coordinates of Roky’s home… are now forever part of the scientific literature.”

According to the auction house, the debris that almost hit Roky are “among the most researched meteorites of all time”

They also happen to be of great scientific interest, as they “not only contain tens of thousands of prebiotics, including amino acids, but also pre-solar grains ranging up to twice the age of the solar system.”

For your money, you also get a doghouse made of “pressed wood with an oxidized tin roof.” Of course, it also has the words “House” and “Roky” sketched in pencil on the front.

A wooden floor, however, didn’t survive the meteorite impact.

It wouldn’t be the first random object hit by a meteorite. According to Christie’s, a battered mailbox went for $83,000 in 2007.

While Roky was very lucky to survive, a Venezuelan cow was far less fortunate, becoming the “only documented animal death” by meteorite strike in 1972.

Weirdly enough, Christie’s sold the rock that killed the cow for the equivalent of $7,100 back in 2016.

More on meteorites: Woman Almost Smashed by Meteorite That Crashed Through Ceiling and Landed on Her Bed

ANIMALS THAT COULD DO BETTER
This Record-Breaking Astronaut’s Dog Is Really Glad to See Her. But.
2. 14. 20
Read More
Scientists Just Discovered A New Type of Meteorite
6. 22. 16
Read More
Water Trouble
Wealthy Horrified That Drought Could Affect Their Luxurious Pools and Koi Ponds
Yesterday
Read More
+Social+Newsletter
TopicsAbout UsContact Us
Copyright ©, Camden Media Inc All Rights Reserved. See our User Agreement, Privacy Policy and Data Use Policy. The material on this site may not be reproduced, distributed, transmitted, cached or otherwise used, except with prior written permission of Futurism. Fonts by Typekit and Monotype.