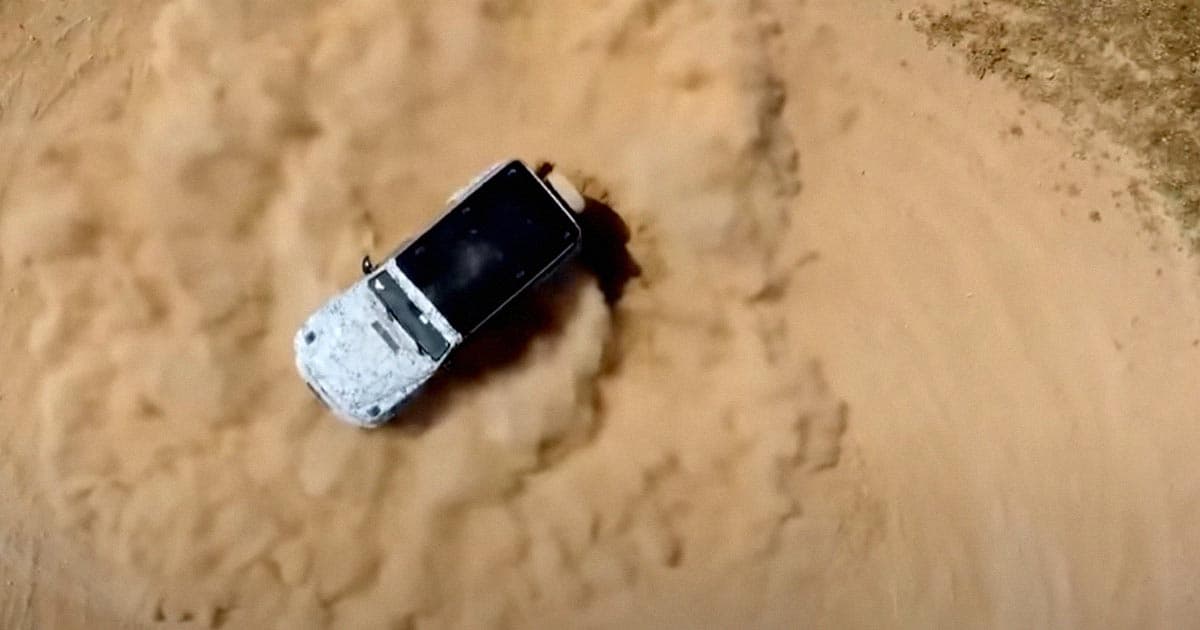 Don't Make Me Turn This Car Around

German carmaker Mercedes-Benz has shown off an impressive new feature of its upcoming EQG an all-electric version of its premium G-Wagon off-roader.

The move, which the brand is calling "G-Turn," allows the massive vehicle to literally spin around its own axis. A video of the feature shows a truck kick up a vortex of dust as it grinds its four wheels into a dirt track.

The EQG pulls off the trick using its quad motor powertrain, which allows it to apply torque to each of its four wheels independently, with two sides moving in opposite directions, thereby making it spin, much like a military tank.

It's arguably an even more impressive demo than US carmaker GMC's Crab Mode, which enables its all-electric Hummer EV to drive diagonally — yet another advantage electric vehicles can have over their gas-powered counterparts.

The EQG wouldn't actually be the first electric truck to be able to pull of such a stunt. EV startup Rivian showed off a similar "tank turn" back in 2019

It's unclear if the EQG will actually be able to pull off the stunt when it's on a harder surface like asphalt. And moving its wheels in different directions is bound to be pretty tough on tires.

We still don't know an awful lot about Mercedes' new off-roader. It's set to go on sale in 2024, and is rumored to start at around the $150,000 mark, according to Car and Driver.

The electric truck market is really starting to heat up, with a number of big brands ramping up the hype for their upcoming vehicles — and in that increasingly crowded market, it may take some tricks like this one to differentiate any one offering.

READ MORE: Watch the 2024 Mercedes EQG, an Electric G-Class, Do a Tank Turn [Car and Driver]

More on tank turns: Elon Musk Says Cybertruck Will Be Able to "Drive Diagonally Like a Crab"