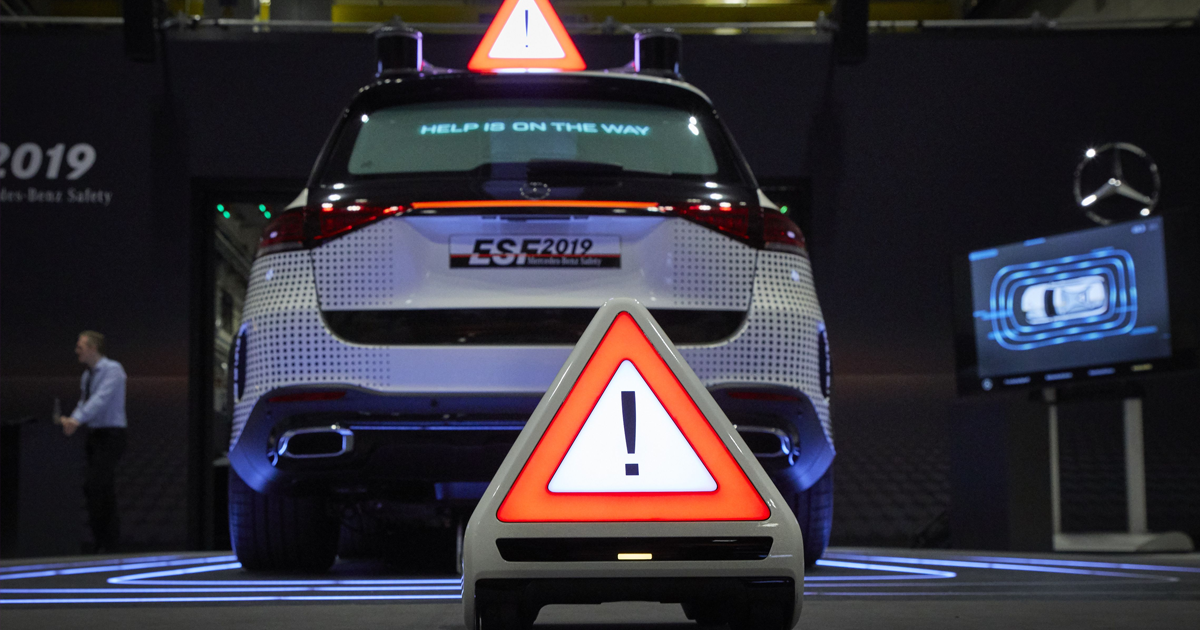 This adorable robot could help warn oncoming drivers of an accident.

This adorable robot could help warn oncoming drivers of an accident.

German automaker Mercedes-Benz just showed off a concept car with a super power that's straight out of Inspector Gadget: a Roomba-like robotic safety triangle that can deploy itself from the vehicle's rear bumper after a car crash, like a smart traffic cone.

The tech could end up saving lives, especially if the vehicle's occupants aren't in a condition to warn oncoming drivers of an accident and other road hazards.

The "Warning Triangle 4.0" was designed for Mercedes-Benz's autonomous Experimental Safety Vehicle 2019 concept, a showcase that's focused on what car safety technologies could soon look like in the age of self-driving.

A deployable ramp built into the rear bumper of the car lowers the adorable bot to the ground, according to Car and Driver. The robot then can roll out and warn oncoming drivers of the accident. It can also communicate with other cars through wireless technology.

Notifying other drivers on the road is — and will be — an extremely important aspect of ensuring any driver or occupant's safety. And that's especially the case when there isn't a driver behind the wheel in the first place.

READ MORE: If You Crash a Mercedes-Benz in the Future, It Could Deploy a Robot to Warn Other Drivers [Car and Driver]

Netflix and Drive
Mercedes Claims to Have Achieved Level 3 Automation, Beating Tesla
Jan 30
Read More
Why Car Insurance Is So Complex, and How to Simplify It
11. 2. 20
Read More
Drive This Way
White Paper: These 12 Principles Are Shaping the Future of Autonomous Cars
7. 3. 19
Read More
+Social+Newsletter
TopicsAbout UsContact Us
Copyright ©, Camden Media Inc All Rights Reserved. See our User Agreement, Privacy Policy and Data Use Policy. The material on this site may not be reproduced, distributed, transmitted, cached or otherwise used, except with prior written permission of Futurism. Articles may contain affiliate links which enable us to share in the revenue of any purchases made.
Fonts by Typekit and Monotype.