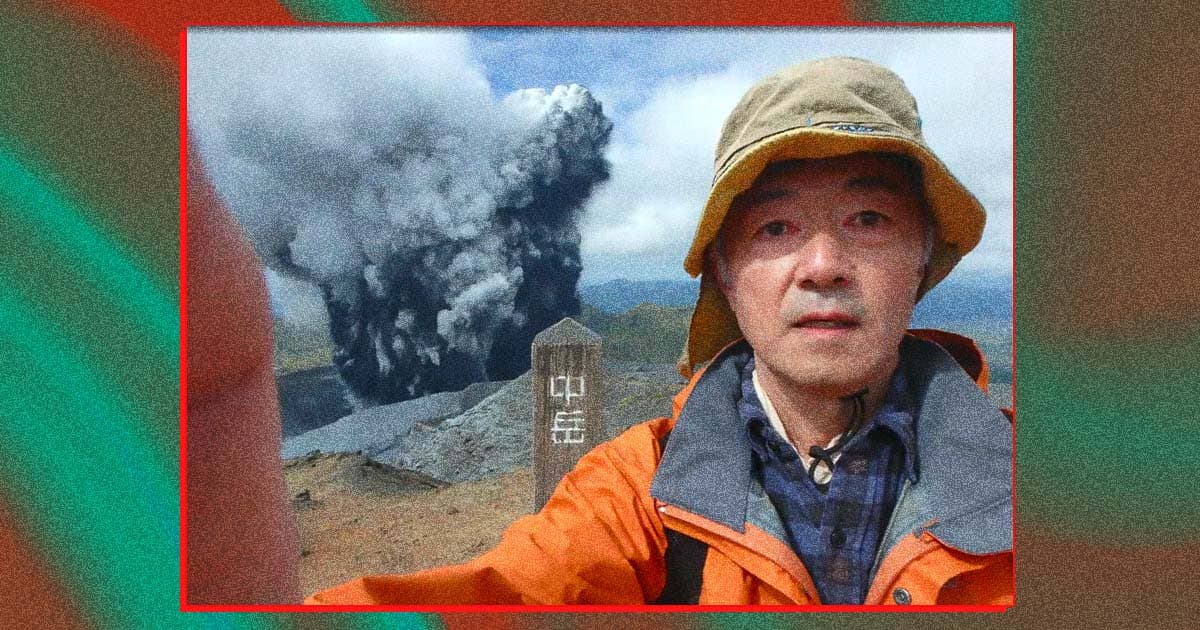 Man Takes Selfie Right as Volcano Explodes Behind Him

"I was scared. I never thought I would encounter such a thing."

"I was scared. I never thought I would encounter such a thing."

A Japanese man might have gotten the selfie of a lifetime when he says he snapped a picture of himself as a volcano was erupting behind him.

The man had hiked near the summit of Mount Nakadake, one of the five peaks of Mount Aso, according to RKK Kumamoto, a Japanese broadcaster. Mount Aso happens to be the largest active volcano in Japan, and one of the largest ones in the world. Unluckily for this unnamed sightseer, he says he decided to take a selfie just as it was erupting.

"When I was looking through [my camera], the white smoke turned black, and after about three seconds, I heard a swooshing sound," the man told RKK, in comments translated by Google. "I was scared. I never thought I would encounter such a thing."

The result was a fairly epic selfie of the man looking a bit surprised as an enormous volcano explodes behind him. He then ran for safety behind a large rock, he told the broadcaster, after he saw ash and volcanic debris fall from the sky. Luckily, he was able to head down the mountain and got away unscathed.

Mount Aso began erupting on Wednesday around 11:40am local time, Reuters reports. While the area is known for being a popular tourist destination, police say that no one has been reported dead or missing, and that 16 hikers who had gone up the mountain that day returned safely.

The fact that no one was hurt is a minor miracle — as videos of the volcano erupting are horrifying to say the least.

Between the selfie and the videos of the volcano billowing smoke and hellfire, the Mount Aso eruption is a humbling reminder of just how small humans are in the grand scheme of things — and how easily forces of nature can absolutely destroy us.

Ocean Explosion
Hey Kids, Wanna See Satellite Footage of a Volcano Violently Erupting?
1. 15. 22
Read More
Does Whatever a Boar Pig Does
Fukushima Now Home to Radioactive Boar-Pig Hybrids
6. 30. 21
Read More
Fukushima Plans to Power Region With 100% Renewable Energy
1. 6. 20
Read More
+Social+Newsletter
TopicsAbout UsContact Us
Copyright ©, Camden Media Inc All Rights Reserved. See our User Agreement, Privacy Policy and Data Use Policy. The material on this site may not be reproduced, distributed, transmitted, cached or otherwise used, except with prior written permission of Futurism. Articles may contain affiliate links which enable us to share in the revenue of any purchases made.
Fonts by Typekit and Monotype.