When pig farmers fled the area over ten years ago, their abandoned livestock started breeding with local wild boar. 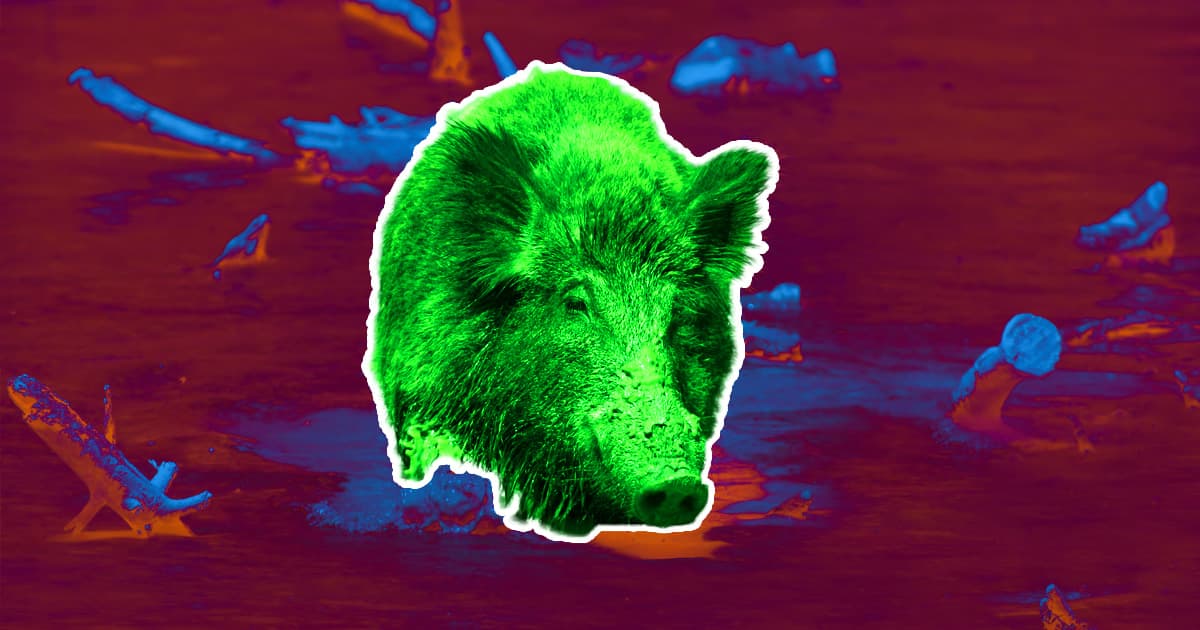 It's been just over a decade since a massive 9.0 magnitude earthquake triggered a tsunami that caused the meltdown of a nuclear reactor in Japan's Fukushima region.

The ensuing evacuation has allowed local plant and animal species to thrive, reclaiming nature in the absence of humans. Included among the thriving fauna: domesticated pigs that have bred with wild boars to create new hybrids, as Inverse reports.

Even stranger is that some of the wild boars present in the area may be "relatively" radioactive, according to a June 2020 study, and are now being hunted to allow residents to eventually return home.

It's a vivid illustration of what happens when humans are forced to flee following a natural disaster, allowing animals to adapt to their newly hospitable environment.

"While humans cannot return, wildlife did return and even thrived in this human abandoned landscape," Donovan Anderson, PhD student at Fukushima University and co-author of a new study on the emergence of boar-pig hybrids in the Fukushima region, told Inverse.

According to Anderson and his colleagues' analysis — the team studied muscle samples of 243 wild boars, pigs, and boar-pig hybrids — 16 percent of local wild boar from the evacuated zone were hybrids after local populations bred with abandoned domesticated pigs.

"The greatest number of hybrids detected, or relatively 75 percent of all hybrids, were within the initial 20 km radius evacuation zone," reads the paper.

The hybrids aren't likely to stay hybrids in the long term. The hybrids had only eight percent of pig DNA on average, indicating that pig genes aren't lasting across generations.

"In case of the invasive species — pigs that were released from the [Fukushima] event — we think they had poor adaption or survival characteristics in the wild," Anderson told Inverse. "We do not expect these adaption changes in boar, likely caused from the absence of people, to maintain in populations especially as [human] disturbance returns," Anderson told Inverse.

Read This Next
Back Online
Japan May Need Nine Nuclear Reactors Turned On to Get Through Winter
Futurism
Fukushima Plans to Power Region With 100% Renewable Energy
Futurism
Nuclear Power Used to Seem Like the Future. Now Its Fate in the US Is in Question.
Futurism
Congress Hasn't Given up on Nuclear Power
Futurism
After Six Years, We Finally Found the Melted Uranium at Fukushima
More on Earth & Energy
Going Hydrogen
Dec 2 on the byte
Airbus to Strap Hydrogen Fuel Cell Engine to Massive Superjumbo Jet
Wolfenstein
Dec 1 on the byte
A Brain Parasite Is Making Wolves Into Pack Leaders, Scientists Say
LED Down the Wron...
Dec 1 on the byte
Defective LED Streetlights Are Turning the Night Purple
READ MORE STORIES ABOUT / Earth & Energy
Keep up.
Subscribe to our daily newsletter to keep in touch with the subjects shaping our future.
+Social+Newsletter
TopicsAbout UsContact Us
Copyright ©, Camden Media Inc All Rights Reserved. See our User Agreement, Privacy Policy and Data Use Policy. The material on this site may not be reproduced, distributed, transmitted, cached or otherwise used, except with prior written permission of Futurism. Articles may contain affiliate links which enable us to share in the revenue of any purchases made.
Fonts by Typekit and Monotype.