"We live on a fragile wet ball of lava in space you guys." 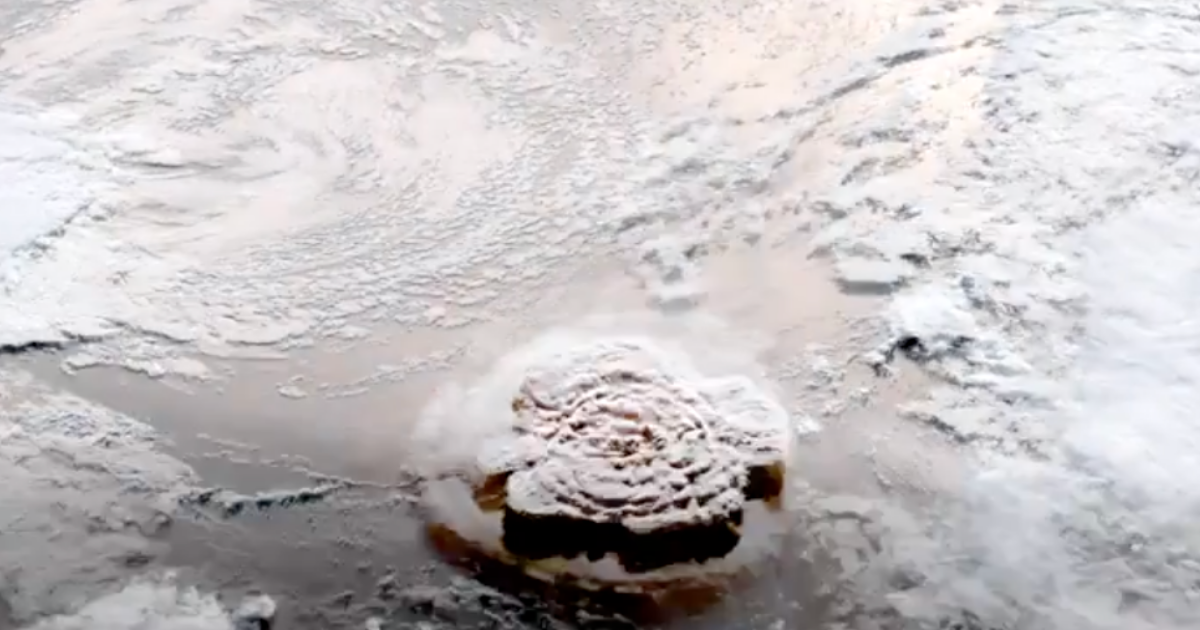 Earlier this morning the National Weather Service issued a tsunami alert for parts of Alaska, Washington, Oregon and California following the eruption of a major underwater volcano near the Pacific nation of Tonga. Although the Associated Press reported there were no immediate injuries, tsunami waves that hit the island nation's shores — and if you want, you can watch the volcano erupt in real time.

Wonder of Science posted a collection of images taken by satellites GOES-West and Himawari-8, and compiled them into a short video. In the clip, the smooth ocean surface is suddenly disrupted by a giant plume of gray ash, smoke and water rippling outward. It almost looks like a giant underwater bomb went off — and after all, in a geological sense, it kinda did.

The violent eruption a few hours ago of the Hunga Tonga-Hunga Haʻapai volcano captured by satellites GOES-West and Himawari-8. pic.twitter.com/PzV5v9apF6

The video reminded some viewers of just how powerful the Earth and its geologic features truly are.

"We live on a fragile wet ball of lava in space you guys." one Twitter user commented.

Although the clip is scary and waves have been reported, the NWS says most people should be relatively safe if they seek higher ground.

"Areas in the advisory should not expect widespread inundation," the NWS said in their report. "Tsunamis are a series of waves dangerous many hours after initial arrival time. The first wave may not be the largest."

For perspective, here's what the eruption looks like from down below.

Wow this is terrifying, the type of sonic boom you hope you never hear. That is a staggering pressure spike. [NSFW language]

It's good to hear this one may not be as serious as the deadly 2004 tsunami, but according to the Smithsonian, the eruption has been happening intermittently since late December of 2021. Some activity periods lasted as long as 30 minutes, spewing ash, pumice, gas and steam into the water and surrounding air.

In a bizarre weather-combo twist, a cyclone that passed through the area also obscured views of the volcano in early January 2022. Because the volcano is so active, it's actually building new islands. An eruption that began in December of 2014 built a new island between two other large islands.

It's cool to watch such massive tectonic movement happen in real time, but let's not forget that tsunamis can be dangerous, and the NWS does advise leaving shorelines and moving inland to higher ground. Nature is beautiful but deadly — not something to joke around with.

Read This Next
Circle of Life
Hooray! The Great Pacific Garbage Patch Has Become a Thriving Ecosystem, Scientists Say
Bad Spill
Scientist Warns That a Huge Tanker Is Probably Going to Spill a Million Barrels of Oil Into the Ocean
Sinking City
Indonesia Is Switching Capital Cities Because the Old One Is Sinking Into the Ocean
Futurism
Atlantic Circulation Weakening: No, We’re Not All Gonna Die (I Mean, Not Because Of This)
Futurism
Strange "Earthquake Lights" Accompanied Mexico's 8.2 Magnitude Earthquake
More on Earth & Energy
Save Yourselves
Yesterday on the byte
Furious Marsupial So Thirsty For Sex That It’s Dying, Scientists Warn
Stem Ware
Feb 3 on the byte
Scientists Discover World's Oldest Preserved Vertebrate Brain
From Bad to Worse
Feb 2 on the byte
Global Warming Is Worse Than We Thought, AI Tells Scientists
READ MORE STORIES ABOUT / Earth & Energy
Keep up.
Subscribe to our daily newsletter to keep in touch with the subjects shaping our future.
+Social+Newsletter
TopicsAbout UsContact Us
Copyright ©, Camden Media Inc All Rights Reserved. See our User Agreement, Privacy Policy and Data Use Policy. The material on this site may not be reproduced, distributed, transmitted, cached or otherwise used, except with prior written permission of Futurism. Articles may contain affiliate links which enable us to share in the revenue of any purchases made.
Fonts by Typekit and Monotype.