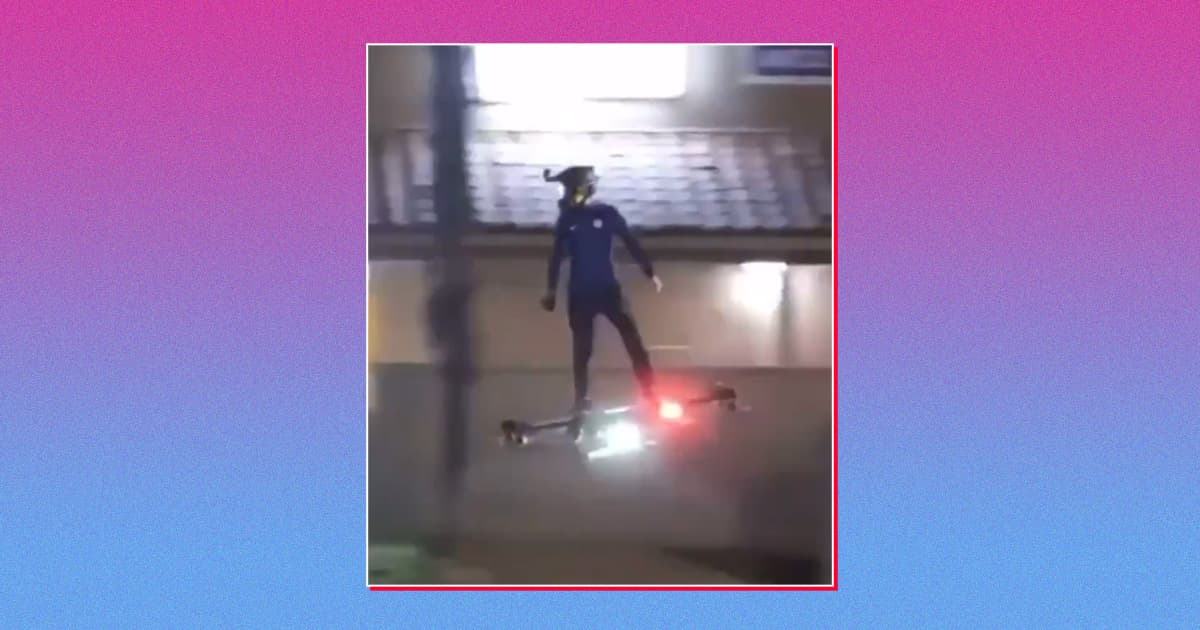 Livin' in the Future

The hoverboard from "Back to the Future II" is finally here.

But it's a lot less inconspicuous than a sleek 80s era skateboard that just happens to defy gravity — and a lot more like the Green Goblin from the "Spider-Man" franchise.

In a new viral video captioned "this man is living in 2030," a person can be seen zipping along a public road, riding on top of what looks like a high-powered drone with eight propellers.

It's likely the stunt broke several laws, but at least the drone rider decided to wear a helmet.

This man is living in 2030! 🔥 pic.twitter.com/fgXLCEPldS

As it turns out, the video isn't some CGI trickery. The drone was created by an inventor named Hunter Kowald, who we interviewed here.

Several videos online show what the drone "hoverboard" is capable of. One video shows a man soaring above the tree line over the top of a country-side pond.

According to the company's website, it's "the first real hoverboard." Its inventor Catalin Alexandru Duru broke the world record for the longest hoverboard flight with it, some 905 feet, back in 2015, according to the Guinness Book of World Records.

Updated with additional information about the inventor of the drone.

Nyoom!
We Talked to the Guy Who Flies Around on a Giant Drone That He Built Himself
7. 6. 21
Read More
Sky Bursts
Astronomers Intrigued by 25 Mysterious Repeating Radio Signals From Deep Space
8:32 PM
Read More
Biggest Loser
Facebook's Metaverse Division Lost Nearly $14 Billion Dollars Last Year
7:56 PM
Read More
+Social+Newsletter
TopicsAbout UsContact Us
Copyright ©, Camden Media Inc All Rights Reserved. See our User Agreement, Privacy Policy and Data Use Policy. The material on this site may not be reproduced, distributed, transmitted, cached or otherwise used, except with prior written permission of Futurism. Articles may contain affiliate links which enable us to share in the revenue of any purchases made.
Fonts by Typekit and Monotype.