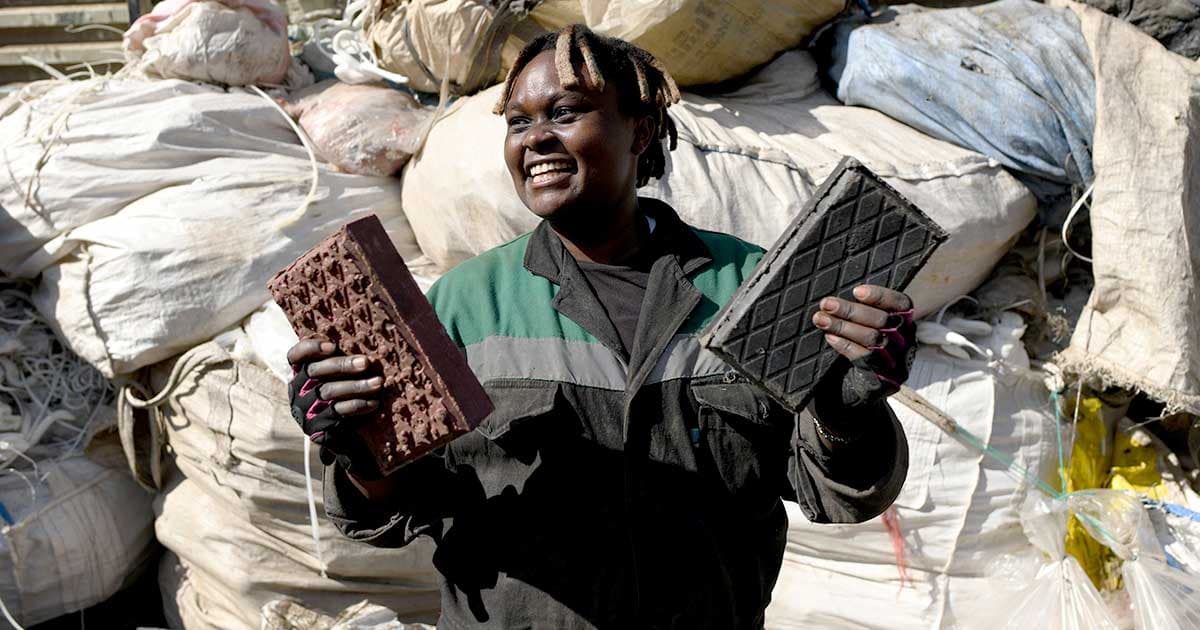 "As a materials expert, I believe that plastic one of the misunderstood materials."

"As a materials expert, I believe that plastic one of the misunderstood materials."

A 30-year-old Kenyan engineer named Nzambi Matee has come up with a promising way to upcycle plastic trash that would've otherwise landed in landfills — by pressing it, with the addition of sand, into sturdy bricks and paving stones.

Her Nairobi-based company, Gjenge Makers, produces a variety of different paving stones, which are already being put to use to line sidewalks, driveways, and roads.

According to the engineer, the plastic pavers are seven times stronger, 15 percent cheaper to produce and lighter than concrete. And the venture is just getting started, with the company now investigating ways to construct affordable housing from similar materials.

The solution is addressing a massive problem in the African nation's capital.

"As a materials expert, I believe that plastic one of the misunderstood materials, because its effect is so huge that you aren't able to quantify it, but its impact is equally the same," Matee told The Hindu in a recent video interview.

"In Nairobi we generate about 500 metric tons of plastic waste every single day, and only a fraction of that is recycled," she told Agence France-Presse back in March. "And that made me think — what happens to this plastic?"

The reality is that less than ten percent of plastic ends up getting recycled, which means that landfills are growing at a staggering pace.

Unfortunately, the company's machines still can't process PET plastic, one of the most commonly used types, but Matee hopes to change that soon.

From Our Partners
Get Cleaner Laundry With The Eco-Friendly Ecoegg During This Pre-Black Friday Sale
11. 11. 21
Read More
From Our Partners
Reduce Plastic Waste And Always Be Ready For A Drink, With This Stylish Straw Bracelet
4. 27. 21
Read More
From Our Partners
Bring Water And Snacks, And Reduce Plastic Waste, With The FLPSDE
4. 25. 21
Read More
+Social+Newsletter
TopicsAbout UsContact Us
Copyright ©, Camden Media Inc All Rights Reserved. See our User Agreement, Privacy Policy and Data Use Policy. The material on this site may not be reproduced, distributed, transmitted, cached or otherwise used, except with prior written permission of Futurism. Articles may contain affiliate links which enable us to share in the revenue of any purchases made.
Fonts by Typekit and Monotype.