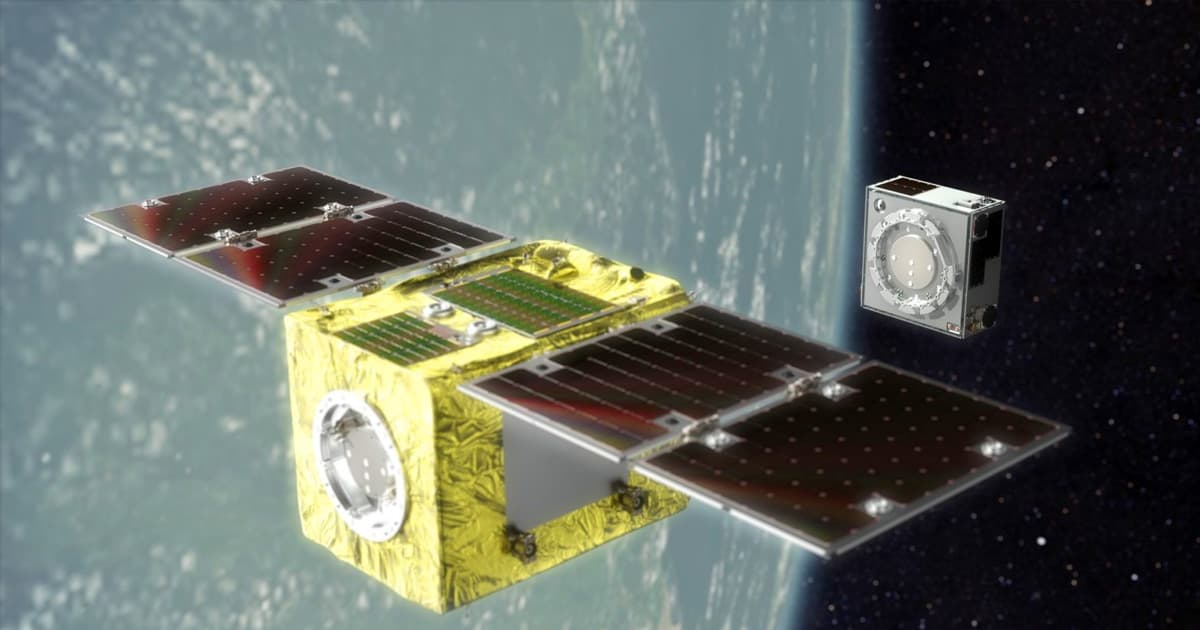 Just-Launched Spacecraft Will Use Grappling Hook to Destroy Space Junk

It uses a magnetic grappling hook to catch space junk and fling it into an incineration orbit.

It uses a magnetic grappling hook to catch space junk and fling it into an incineration orbit.

A Japanese company called Astroscale is tackling the increasingly dangerous cloud of space junk orbiting our planet and the real threat it poses to satellites and other spacecraft.

The company launched a new kind of satellite called the End of Life Services by Astroscale-demonstration (ELSA-d) on Monday, Quartz reports. Soon, ELSA-d will use a powerful magnet to latch onto a doomed companion satellite and fling it down into a lower orbit where the ill-fated companion will incinerate upon reentry into the atmosphere. Meanwhile ELSA-d will remain safely stationed in a higher orbit, ready and waiting for the next mission — a demonstration of how it could help clean up other garbage in orbit.

The problem facing companies like Astroscale is that they're entering such a new industry. Because there's practically no one out there servicing existing satellites that are already in orbit, it doesn't make sense for other companies or space agencies to put the extra effort into building readily-serviced satellites.

"It’s kind of chicken and egg," Ben Reed, formerly the head of space servicing research at NASA's Goddard Space Center, told Quartz. "There is no servicer for the masses."

That could soon change, though, with Astroscale's ELSA-d and a satellite-refueling initiative from Lockheed Martin helping pave the way.

For instance, Quartz notes that OneWeb Satellites plans to put magnetic panels — the same kind ELSA-d can latch onto — on its constellation of broadband satellites, potentially helping to set the satellite repairability trend in motion.

More on space junk: Research: Most Geosynchronous Space Junk Has Never Been Catalogued

Duck and Roll
Russia Forced to Dodge Space Debris From When It Blew Up Satellite
Jun 17
Read More
Astronaut Drip
We Just Got the First Peek at NASA's Artemis Moon Landing Suits
Jun 3
Read More
Blast Off
Former Astronaut Details Quest to Grow Cannabinoids in Space
Apr 20
Read More
+Social+Newsletter
TopicsAbout UsContact Us
Copyright ©, Camden Media Inc All Rights Reserved. See our User Agreement, Privacy Policy and Data Use Policy. The material on this site may not be reproduced, distributed, transmitted, cached or otherwise used, except with prior written permission of Futurism. Fonts by Typekit and Monotype.