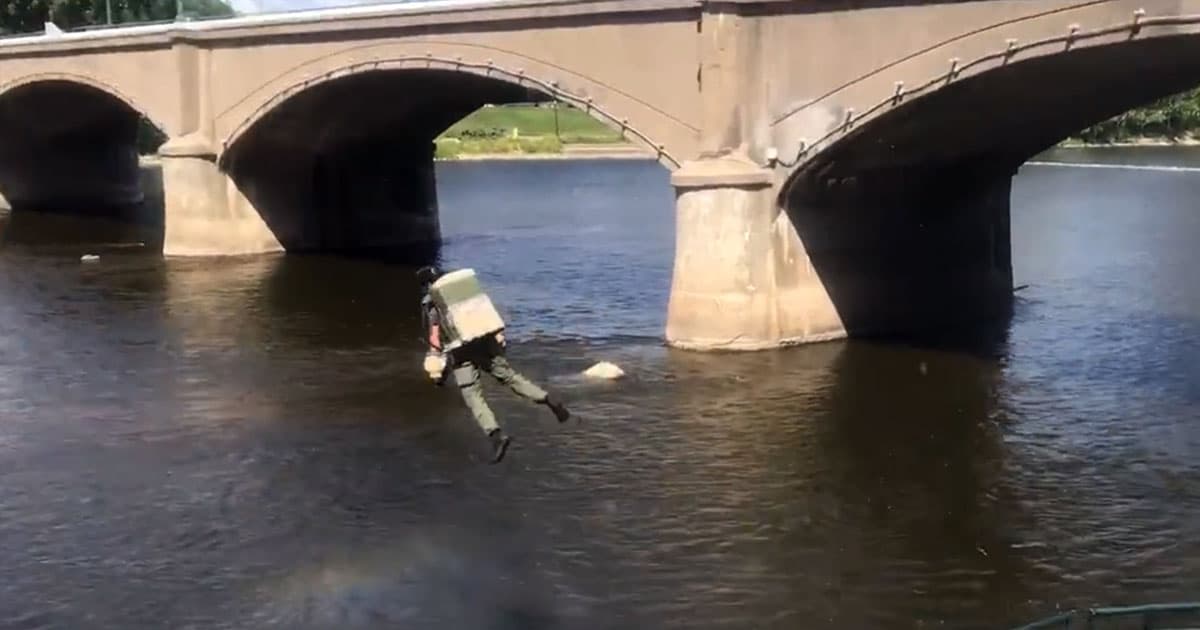 Residents Astonished When Man in Jetsuit Cruises Through Arch in Bridge

Residents in downtown Grand Rapids, Michigan, were shocked to see a man in a jetsuit blast over the city's Grand River, and even dive through an arch of a nearby bridge earlier this week.

As it turns out, the man with the jetpack was none other than Alex Wilson, who has been testing the unusual gear for the UK-based company Gravity. In fact, according to local news, Wilson has already donned the suit at more than 200 events.

"It’s genuinely so intuitive and so natural to fly that anyone can do it," he told local reporters. "This isn’t another aircraft, it’s really you flying."

Gravity's suits, which the company likes to refer to as "1,000 horsepower jet suits," make use of jet turbines attached to the wearer's arms and back.

The company is confident enough to allow inexperienced thrill-seekers to test out the jetpack at a training facility just outside of London, UK.

Gravity is also trying to bring the technology to the military and first responders, who could one day use them to traverse difficult terrain and provide emergency assistance.

There's a decent chance we'll be seeing more of these suits in the near future. With the interest from famous investor Tim Draper, who invested early in both Tesla and SpaceX, Gravity has strong financial backing.

Given how effortlessly Wilson was able to zip over the Grand River this week, it may only be a matter of time until they become a staple in the arsenal of first responders and military units alike.

More on jetpacks: Watch a Guy Take Off With an Electric Backpack Helicopter

Get Ready for Takeoff. You Can Finally Buy a Real-Life Jetpack
11. 11. 16
Read More
Dubai is Buying its Firefighters JetPacks to Battle Blazes on Skyscrapers
11. 25. 15
Read More
Stem Ware
Scientists Discover World's Oldest Preserved Vertebrate Brain
9:45 PM
Read More
+Social+Newsletter
TopicsAbout UsContact Us
Copyright ©, Camden Media Inc All Rights Reserved. See our User Agreement, Privacy Policy and Data Use Policy. The material on this site may not be reproduced, distributed, transmitted, cached or otherwise used, except with prior written permission of Futurism. Articles may contain affiliate links which enable us to share in the revenue of any purchases made.
Fonts by Typekit and Monotype.