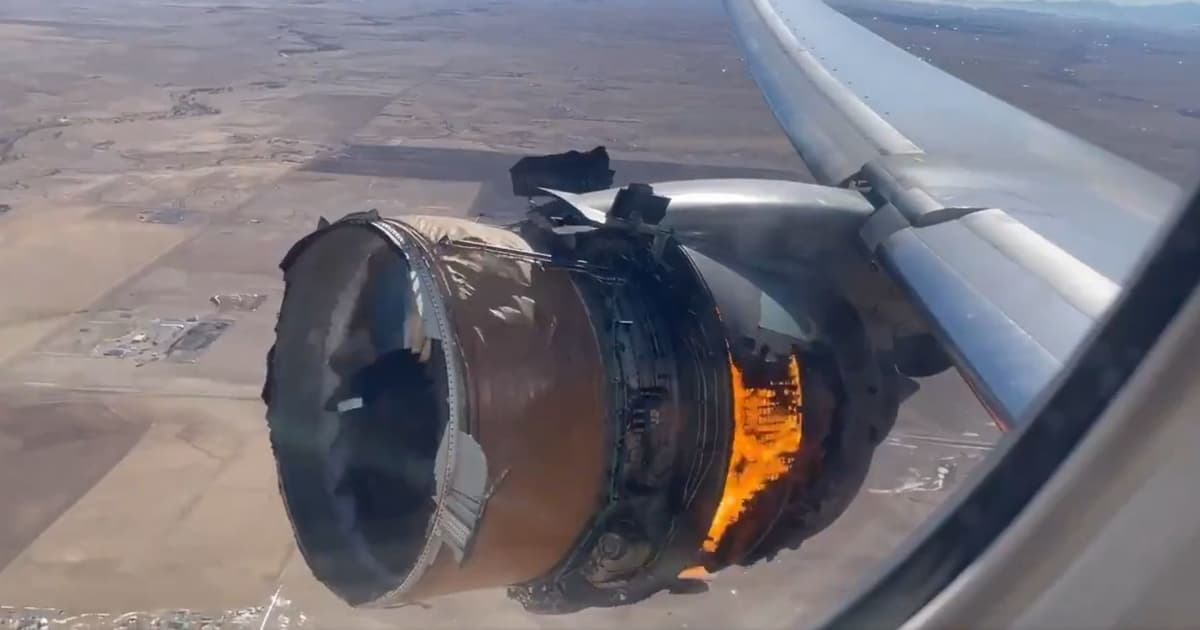 Here's a video of the flaming engine — from inside the plane.

Here's a video of the flaming engine — from inside the plane.

As if we needed another reason not to travel right now, a United Airlines flight experienced catastrophic engine failure that resulted in airplane debris raining from the sky onto Denver suburbs on Saturday.

United Flight 328 was forced to land at the Denver International Airport shortly after taking off for Honolulu when the plane’s right engine failed, according to The Denver Post. No injuries were reported among the more than 240 crew and passengers.

One passenger inside the aircraft was able to capture horrifying footage of the broken engine — which seems to have been ripped straight from my nightmares.

Passengers in the plane and witnesses on the ground reported hearing a loud boom followed by a drastic drop in altitude shortly after takeoff.

"I can honestly say I thought we were going to die at one point — because we started dropping altitude right after the explosion," David Delucia told The Denver Post. "I grabbed my wife’s hand and said, 'We’re done.'"

Pieces of the engine fell from the sky landing on the ground in north Denver suburbs. The debris included a large ring from the engine, along with shards of the engine’s shell. Thankfully, nobody was hurt by the debris.

This photo was taken near 13th and Elmwood. Media stage in Commons Park on North side near dog park. PIO eta is 30 mins. pic.twitter.com/vfXlToB5mE

The National Transportation Safety Board has launched an investigation to see what caused the accident. Though they have yet to announce a definitive cause, some aviation experts believe that the failure occurred when the spinning discs inside of the engine suffered a failure and broke through the engine casing.

"That unbalanced disk has a lot of force in it, and it’s spinning at several thousand rotations per minute," Captain John Cox, an aviation safety expert and retired pilot, told The Denver Post, "...and when you have that much centrifugal force, it has to go somewhere."

In any case, it might be best if we all just avoid airline travel until the pandemic is over.

Deadly Development
Whistleblower Says Boeing 787 Oxygen Masks Don't Work
11. 6. 19
Read More
Nose Dive
Pilots Were Worried About Boeing 737 Max Before Deadly Crash
3. 13. 19
Read More
Electric Planes are the Next Frontier in Clean Energy Transport
3. 30. 17
Read More
+Social+Newsletter
TopicsAbout UsContact Us
Copyright ©, Camden Media Inc All Rights Reserved. See our User Agreement, Privacy Policy and Data Use Policy. The material on this site may not be reproduced, distributed, transmitted, cached or otherwise used, except with prior written permission of Futurism. Articles may contain affiliate links which enable us to share in the revenue of any purchases made.
Fonts by Typekit and Monotype.