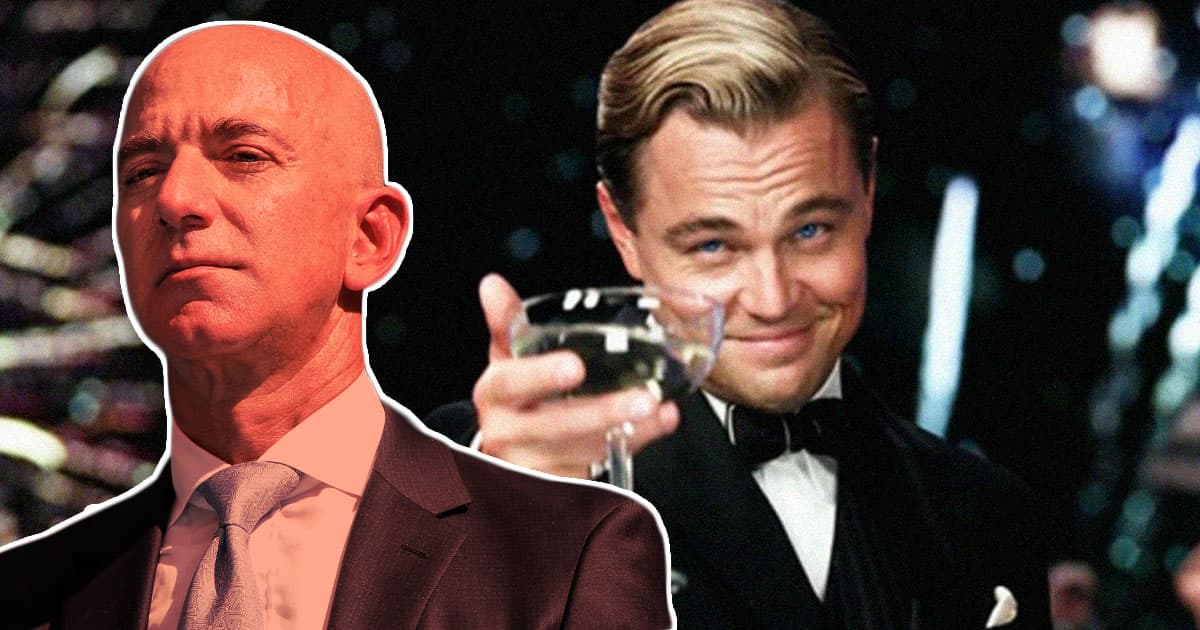 Jeff Bezos Mad That Girlfriend Is Thirsting for Leonardo DiCaprio

"Leo, come over here, I want to show you something..."

"Leo, come over here, I want to show you something..."

It appears that billionaire Jeff Bezos may have a sense of humor.

In response to a now-viral video of the Amazon and Blue Origin founder's girlfriend Lauren Sánchez cozying up to movie star Leonardo DiCaprio, Bezos tweeted a photo of himself standing with a cliffside "danger" sign warning of a "steep cliff" and "fatal drop."

Bezos tagged DiCaprio and added, in syntax that's a bizarre mix of dad humor, clueless billionaire, and, perhaps, an interest in the most dangerous game: "Leo, come over here, I want to show you something..."

Leo, come over here, I want to show you something… @LeoDiCaprio https://t.co/Gt2v9JZTNz pic.twitter.com/KqGLB839NI

Tarnishing the joke, sports website Barstool Sports — the source Bezos quote-tweeted with the video of his girlfriend hugging DiCaprio — was cancelled once again this week after its "presidente" and founder Dave Portnoy was accused of sexual assault by multiple former partners.

Big picture, was the tweet a joke? A threat? One more misfired attempt to appear relatable?

More on Bezos: A Guy Quit Blue Origin and Sent Jeff Bezos a Memo That Tore the Company to Shreds

Deadly Delivery
Amazon Wouldn't Let Driver Stop Deliveries as Tornado Struck
12. 17. 21
Read More
Phone It In
Amazon Under Fire for Workplace Cell Phone Ban After Deadly Warehouse Collapse
12. 13. 21
Read More
SpaceX:1 Blue Origin: 0
Federal Judge Shoots Down Blue Origin's Lawsuit Against NASA
11. 4. 21
Read More
+Social+Newsletter
TopicsAbout UsContact Us
Copyright ©, Camden Media Inc All Rights Reserved. See our User Agreement, Privacy Policy and Data Use Policy. The material on this site may not be reproduced, distributed, transmitted, cached or otherwise used, except with prior written permission of Futurism. Articles may contain affiliate links which enable us to share in the revenue of any purchases made.
Fonts by Typekit and Monotype.