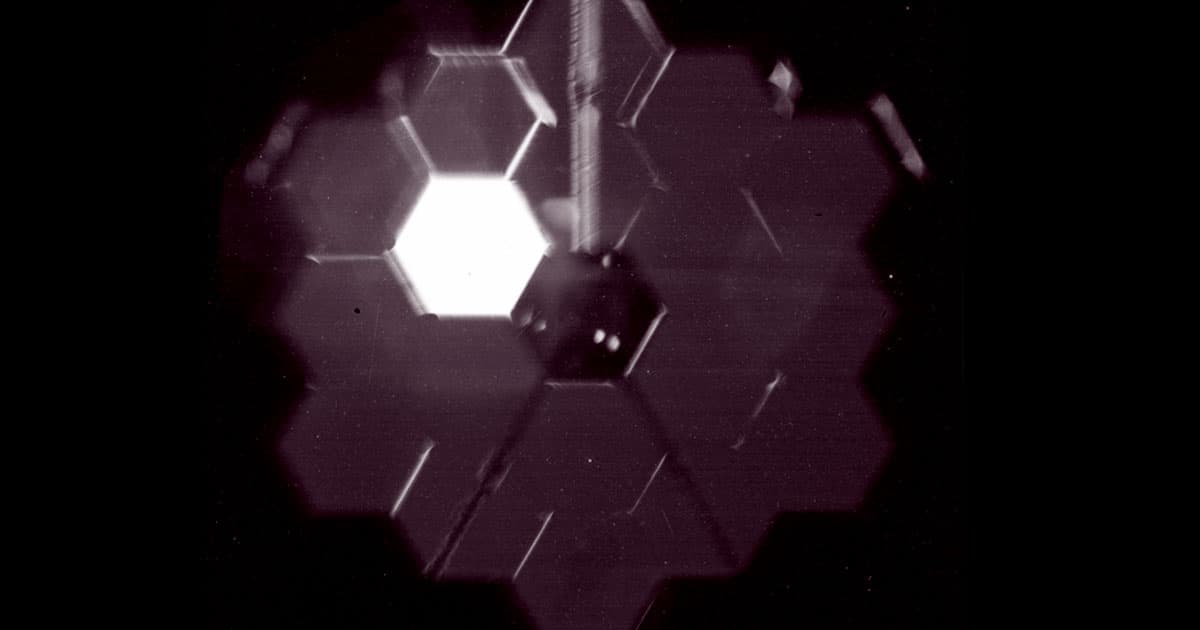 We've finally gotten our first peek at the James Webb Space Telescope's imaging capabilities — and it's a "selfie," sort of.

The blurry self shot, as the Twitter account for the NASA Webb Telescope notes, was taken not by the probe's external cameras, but by a special "inward-looking" lens that's there to help scientists on Earth calibrate its high-powered mirrors as it gears up to be fully operational.

This special lens is meant for engineering, not science, and allows NIRCam to capture an “inward-looking” image of the primary mirror. This image helps us to check that the telescope is aligned with the science instruments. https://t.co/dxfuzpvDCw

Even cooler: the bright mirror segment looks like that because, as NASA notes, it's aligned directly with the star that the JWST is currently observing.

"Over the next 3 months," the account continues, "we will be aligning each mirror segment individually so that all 18 reflections of this star are precisely overlayed until the telescope only sees a single, focused star."

The star in question, NASA noted on its website, is HD 84406. Located in the Ursa Majora constellation, HD84406 "was chosen was chosen specifically because it is easily identifiable and not crowded by other stars of similar brightness, which helps to reduce background confusion."

⚫️ Because the dots could have been spread out, the initial search covered an area about the size of the full Moon. Our team found light from all 18 mirror segments very near the center early in the search, closely matching expectations & simulations. pic.twitter.com/hGQLpgS77R

The process of obtaining these initial outward-facing images generated a sizeable 54 gigabytes of raw data, NASA says, but scientists were "able to locate the target star in each of its mirror segments within the first six hours and 16 exposures."

While space selfies like this one are spectacular, they're not unusual. In early January 2022, China's Mars craft took a self portrait as it orbited the red planet, and last year, NASA's Curiosity Mars Rover got a shot of itself looking like Wall-E while posing on a mountain. Oh, and don't forget that China's adorable-looking rover also snapped a photo of itself posing with the country's lander after they arrived at their destination.

Astronauts, too, have been known to take selfies when they're out among the stars going as far back as 1966, when famed spacewalker Buzz Aldrin snapped his iconic image of himself with the Earth behind him in the distance.

This interstellar selfie from Webb is different, however, because it's among the new telescope's first shots — and because it lets viewers in on some of the mechanical workings of the long-awaited orbital observatory.

As the JWST and its earthbound operators continue to calibrate its lenses over the next year and a half, we'll no doubt get more "selfies" — and maybe it'll learn its angles a little better, too.