China Releases New Photos From the Surface of Mars 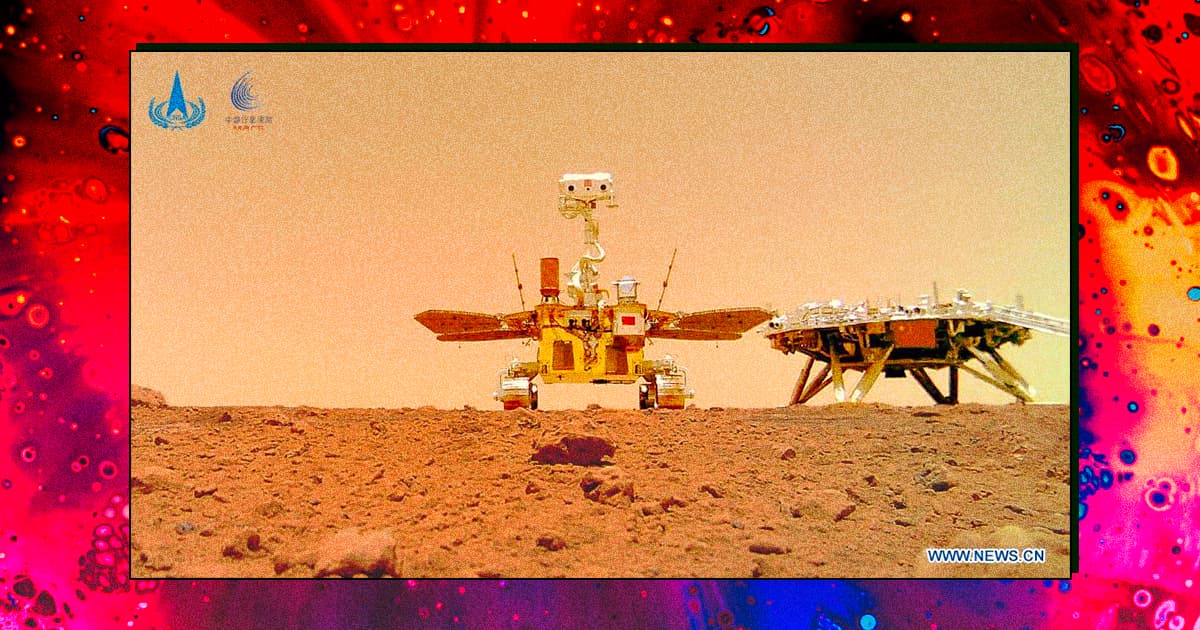 China released a series of new photos from its Zhurong Mars rover this morning.

The images, debuted on state media, are indeed breathtaking — but they came alongside braggadocious verbiage that emphasized the mission's "complete success," as well as the significance of the Chinese flag flying on the Red Planet.

"The images were unveiled at a ceremony in Beijing, signifying the complete success of China's first Mars exploration mission," read a breathless story on the state-owned news outlet Xinhau.

Despite the victory-lap tone of the coverage, the images and landing are indeed impressive. As CNN points out, it took NASA more than 25 years to progress from orbiting a probe around Mars to softly touching down a lander on its surface — a series of feats that China managed to accomplish in a single mission, signifying its immense and growing space ambitions.

At the same time, China's space agency had the advantage of being able to build on NASA's success, and it had access to advanced spacefaring technology that didn't exist in the 1970s or 1990s, when NASA was first exploring the Red Planet.

Still, the swagger of the accomplishment is on full display in the new photos. The most memorable shot, for instance, shows the lander and rover posing on the Martian surface, in a snapshot taken by a remote camera planted by the rover as it explored its immediate surroundings.

Another shot is a glorious panorama of the Utopia Planitia region of Mars, where the lander and rover touched down last month.

A comparatively underwhelming photo shows a field of dirt — although, to be fair, it's Martian dirt, which is pretty cool.

Next, the rover will pursue a series of scientific projects, many with the goal of searching for evidence of ancient life on Mars.

"China will publish the related scientific data in a timely manner to let humankind share in the fruits of the country's space exploration development," said CNSA head Zhang Kejian, in the single quote included in Xinhua's report.

In total, the mission is expected to continue for about three months; so far, it's made it for about 28 Martian days, which are less than an hour longer than Earth days.

Read This Next
A Sip of Opal
NASA Discovers Precious Gemstones on Mars
And He Scores
We Are Completely Puzzled by This Video of a Chinese Astronaut Playing Ping-Pong in Space
Moon Wrestling
The Head of NASA Is Scared Chinese Astronauts Will Seize Portions of the Moon
Martian Oases
Scientist Proposes Growing a Forest Inside a Bubble on Mars
Monkey Business
China Plans to Send Monkeys to Space Station to Have Sex With Each Other
More on Off World
Exoplanet Dance
Yesterday on the byte
Scientist Releases Amazing Video of Exoplanets Orbiting Distant Star
Space Junk News
Yesterday on the byte
Two Large Chunks of Space Debris Just Almost Collided in an Epic Disaster
Mars Drop
Yesterday on the byte
NASA's Mars Rover Perseverance Just Dropped Off Its Last Sample
READ MORE STORIES ABOUT / Off World
Keep up.
Subscribe to our daily newsletter to keep in touch with the subjects shaping our future.
+Social+Newsletter
TopicsAbout UsContact Us
Copyright ©, Camden Media Inc All Rights Reserved. See our User Agreement, Privacy Policy and Data Use Policy. The material on this site may not be reproduced, distributed, transmitted, cached or otherwise used, except with prior written permission of Futurism. Articles may contain affiliate links which enable us to share in the revenue of any purchases made.
Fonts by Typekit and Monotype.