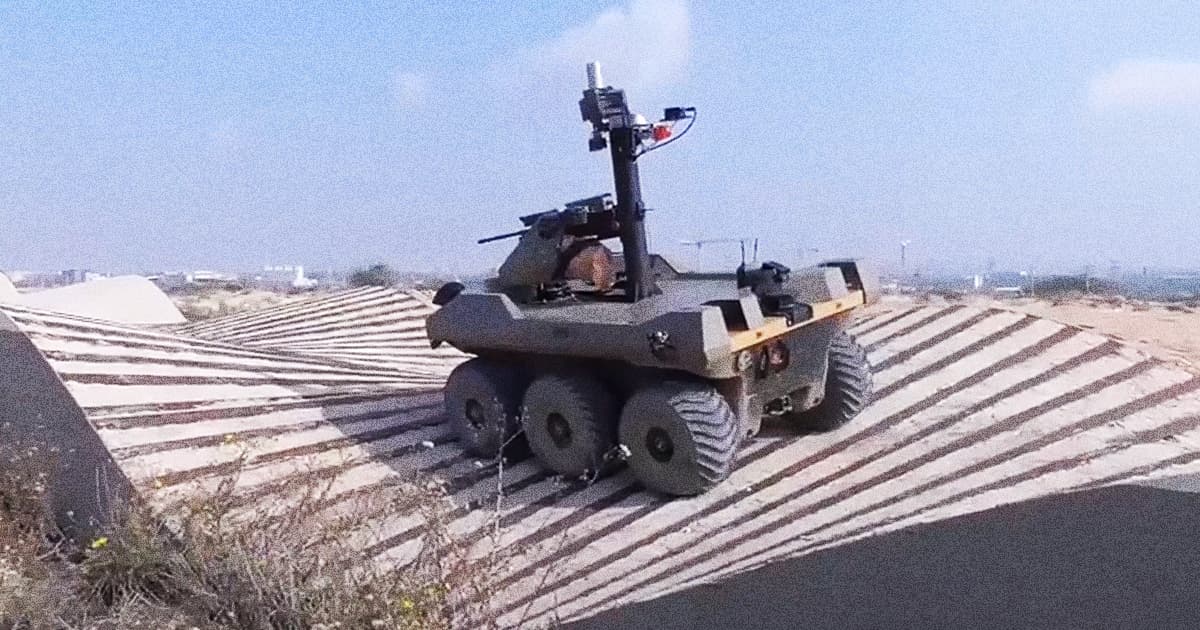 Palestine's Gaza Strip, thanks to the influence of Israel's military, has functionally become an open-air prison where residents' movements are heavily restricted and controlled. And now, to up the ante, Israel is sending killer robots to guard the border.

The border between Gaza and Israel is guarded by thick walls, a naval blockade, drones, machine gun turrets, and armed soldiers. Now, the heavily-reinforced border is also patrolled by tank-like robots called Jaguars armed with 7.62-millimeter machine guns, according to the Daily Beast. The Jaguar has already been photographed at the border, where it's expected to handle crowd dispersal and perhaps even shoot down armed combatants trying to enter or fire projectiles into Israel.

The Jaguar robot is semi-autonomous, according to a press release from the Israeli military, meaning it can steer itself to a designated target and spot obstacles on the way. But under most circumstances, a human operator will actually tell the robot to fire its machine gun — or, if it's compromised, to self-destruct.

While those human operators need to actually pull the trigger through a "point-and-shoot" interface, the Daily Beast notes that the Jaguar's software can automatically adjust its aim to better target whatever it thinks the soldier was telling it to fire at. That little add-on, plus the fact that the Jaguar comes pre-programmed with the ability to fire autonomously in certain scenarios — likely to return fire — present an unsettling glimpse of a future where killer robots can select and terminate human targets all on their own.

While the deployment of the Jaguar may accomplish its stated goals of keeping more Israeli soldiers out of harm's way, the Daily Beast notes that the robots will probably only increase tensions at the Gaza border. For as long as the residents of Gaza continue to live in a heavily-militarized dystopia, it's hard to imagine the deployment of killer robots will do anything except make matters worse.

More on Israel's military: Watch Israel's Military Shoot Down Drones With a Laser