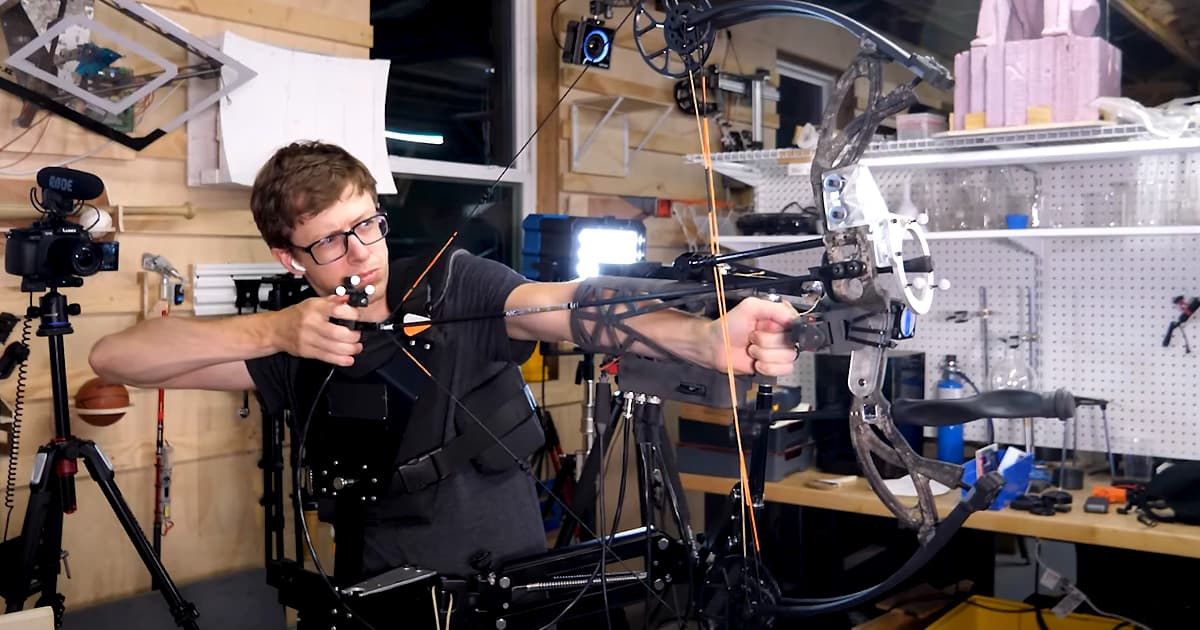 The Sheriff of Nottingham just got a serious upgrade.

The Sheriff of Nottingham just got a serious upgrade.

YouTuber Shane Wighton from the channel "Stuff Made Here" has created a terrifying bow that aims itself and never misses.

The bow is so sophisticated that Wighton doesn't even have to look at the target — he demonstrates with an apple perched on top of a Styrofoam apple — to hit a bullseye.

It's an amazing invention, but perhaps also a sobering reminder of what technology is capable of.

Wighton has brought us a number of delightful inventions, from a bullet-powered baseball bat that can hit insanely far home runs to a basketball hoop backboard that makes sure every single shot goes in.

Remember that terrifying robot arm contraption with an actual chainsaw attached to the end? That was him as well.

His latest invention, a heavily modified bow, allows Wighton to pull back the string and let the bow contraption strapped to his torso take care of the rest. Trackable sensors and code make sure an automatic positioning system points at just the right spot. When the bow is aligned perfectly, the string gets released.

The results are astonishing. The arrows can even hit flying targets, as Wighton demonstrates in his evil lair, or sorry, his basement. It's so accurate, in fact, that it's capable of hitting a Lego "apple" placed on top of an unsuspecting Lego man's head.

"Being good at stuff is so 20th century," Wighton says in his video.

More on Wighton: Check Out This Deadly Robot Arm With an Actual Chainsaw

Robot Violence
YouTube Accidentally Removed Robot Battle Videos for "Animal Cruelty"
8. 20. 19
Read More
What is Happening
Elon Musk Sets His Twitter Account to Private
Yesterday
Read More
Fly Guy
Bird Advocates Horrified by Pigeon Dyed Pink For Gender Reveal Party
Yesterday
Read More
+Social+Newsletter
TopicsAbout UsContact Us
Copyright ©, Camden Media Inc All Rights Reserved. See our User Agreement, Privacy Policy and Data Use Policy. The material on this site may not be reproduced, distributed, transmitted, cached or otherwise used, except with prior written permission of Futurism. Articles may contain affiliate links which enable us to share in the revenue of any purchases made.
Fonts by Typekit and Monotype.