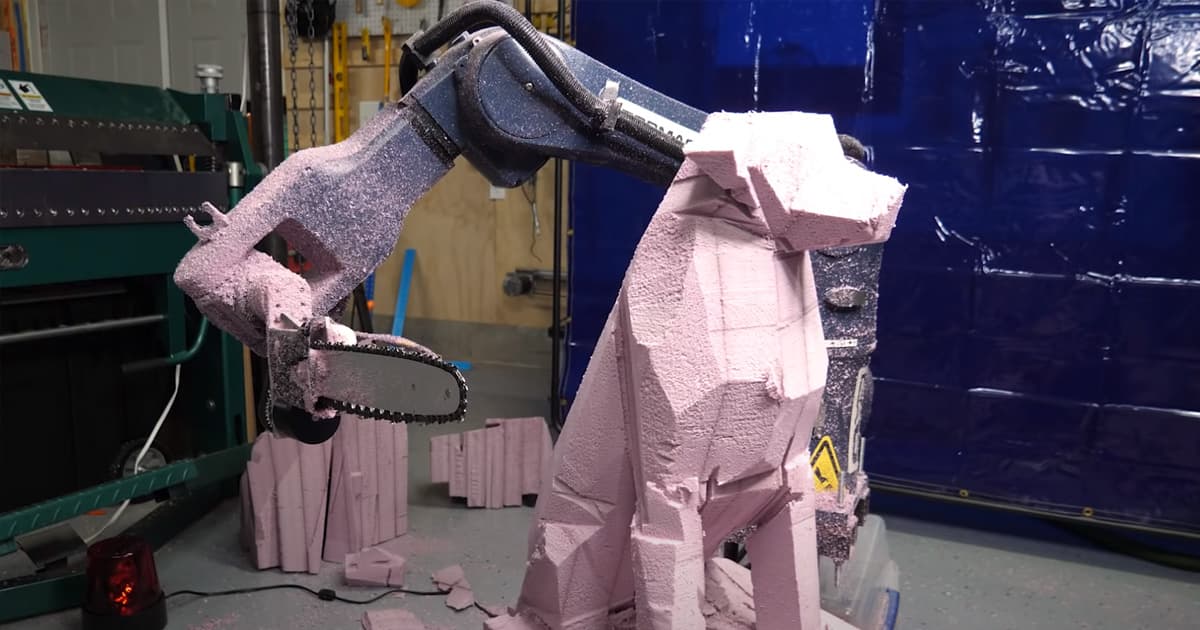 Check Out This Deadly Robot Arm With an Actual Chainsaw

It's like something straight out of a sci-fi horror movie.

YouTube tinkerer Shane Wighton, behind the channel Stuff Made Here, built a giant chainsaw-wielding robotic arm that can chisel a dog shape out of bits of foam board.

Wighton's original plan was to use his invention to create a bear cut out of a piece of wood, like the ones you see at the entrances to state parks.

But several iterations in, the inventor realized that his chainsaw invention was simply not up to the task and ended up burning up or getting stuck in the wood.

Countless trials and tribulations later, Wighton settled on some compromises to his design. The end product is a robotic arm that wields a pole chainsaw — like the ones used to cut off high up tree branches — that can cut a low-polygon shape of a dog out of glued together pieces of foam board.

The inventor also took the time to install several kill switches and an emergency light to indicate when the horrifying death robot was doing its thing.

"Stay back, I will kill you," the robot can be heard saying in a deadpan voice in the video.

Wighton had to write his own code to have the robot, a Tormach robotic arm that costs close to $20,000, determine the perfect cuts in the foam.

It's an impressive feat of engineering. Having the machine analyze which cuts to make, where, and how deep takes some serious upfront work and know-how.

Hopefully, he'll soon figure out how to take his invention to the next level and have it cut a perfect bear out of a honest-to-goodness log.

Thanks, but No Thanks
Oakland Police Want to Arm Robots With Shotguns, Because We Live in a Dystopian Nightmare
Oct 17
Read More
Robot Violence
YouTube Accidentally Removed Robot Battle Videos for "Animal Cruelty"
8. 20. 19
Read More
Choked Out
Entire Island Strangled by Choking Vines
Yesterday
Read More
+Social+Newsletter
TopicsAbout UsContact Us
Copyright ©, Camden Media Inc All Rights Reserved. See our User Agreement, Privacy Policy and Data Use Policy. The material on this site may not be reproduced, distributed, transmitted, cached or otherwise used, except with prior written permission of Futurism. Articles may contain affiliate links which enable us to share in the revenue of any purchases made.
Fonts by Typekit and Monotype.