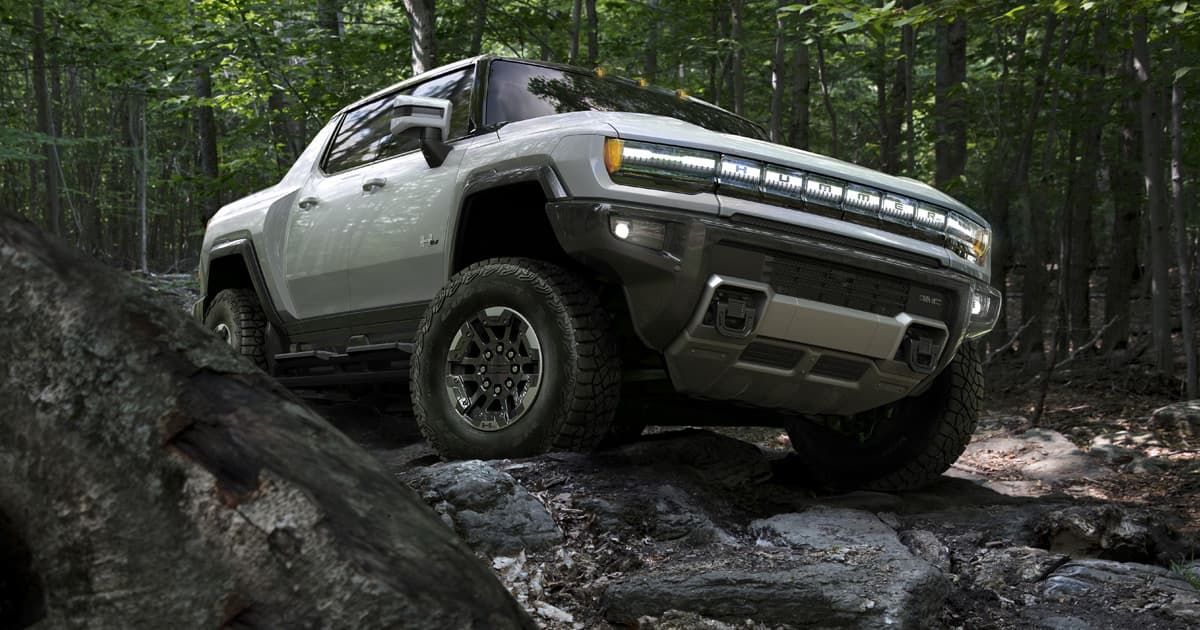 Is this the Cybertruck killer we've been waiting for?

Is this the Cybertruck killer we've been waiting for?

On paper, the “electric supertruck” ticks all the boxes. The Hummer EV is a 1,000 horsepower beast with air suspension and a 350-mile range — not to mention it can even drive diagonally thanks to a feature called “Crab Mode.”

Did we mention it’s speedy? The steel-clad goliath can accelerate from 0 to 60 mph in just three seconds.

It’s an odd twist in GM’s Hummer brand, which was once infamous for being one of the least efficient, most greenhouse gas-producing trucks on the market — a far cry from its electric iteration.

The Hummer EV is so rugged, in fact, that GM might be hinting that it’s capable of traversing some of the roughest landscapes — even outside of Earth. The Edition 1 variant is riddled with callbacks and references to the rugged terrain of the Moon, as spotted by YouTuber Jack Nelson of the “JerryRigEverything” channel.

“Intergalactic travel and otherworldly landscapes are the inspiration for [the Hummer EV’s] Lunar Horizon themed interior,” reads an official description on GM’s website. The speaker cover features topographical lines of the Sea of Tranquility, the site of the first manned landing on the Moon on July 20, 1969. Apollo era boot prints can be seen all around the interior.

GM is aiming the truck squarely at off-road enthusiasts. Some Hummer EV models will be able to raise the truck’s suspension by a lofty six inches, for a total of 16 inches of ground clearance, to tackle the most “extreme off-road situations” including boulders or deep waters, a feature GM is calling “Extract Mode.”

Another feature, called “Crab Mode,” is also very much intended for navigating tight spaces during off-roading, allowing all four wheels to move side to side independently. An extremely narrow rocky canyon limiting the turning radius? No problem.

The truck certainly isn’t designed for hypermiling on the highway either. 350 miles is not exactly groundbreaking, with several upcoming electric sedans crushing the 400 mile marker on a single charge.

GM is prioritizing speedy charging, though. The carmaker claims the truck can charge up to 100 miles in just ten minutes — a full charge in less than 40 minutes — thanks to an 800 volt charging system. That comes out to an impressive charging rate of 350 kW, faster than Tesla’s “V3” Superchargers.

The truck will go into production late next year and will go on sale in late 2022. That’s more or less the timeline for Tesla’s competing Cybertruck, a similarly beefy, all-electric monster of a truck.

A three-motor “EV3X” model and a features-enhanced two motor variant called “EV2X” will be available in fall 2022 and spring 2023 respectively.

The lineup will also feature an 18-camera “Ultravision” system that will alert the driver to pedestrians and allow them to see their entire surroundings. That’s important considering the truck’s enormous size — the vehicle is so wide, it needs three separate windshield wipers side by side.

A 12 inch screen gives the driver most of the information relevant to them. It will also show off some impressive graphics related to the status of the truck thanks to the company’s partnership with Epic Games, the developer behind the blockbuster video game “Fortnite” and the ubiquitous Unreal Engine.

READ MORE: The Hummer is back as a 350-mile range ‘electric supertruck’ that can drive diagonally [The Verge]

Cyber Squad
Tesla Finally Releases Cybertruck ATV… But For Some Reason It’s Child-Sized
12. 3. 21
Read More
Production Hell
Elon Musk Warns That Each Cybertruck Could Cost “Literally a Million Dollars”
7. 27. 21
Read More
Battle of the Giants
Elon Musk Congratulates Ford on Electric F-150
5. 21. 21
Read More
+Social+Newsletter
TopicsAbout UsContact Us
Copyright ©, Camden Media Inc All Rights Reserved. See our User Agreement, Privacy Policy and Data Use Policy. The material on this site may not be reproduced, distributed, transmitted, cached or otherwise used, except with prior written permission of Futurism. Fonts by Typekit and Monotype.