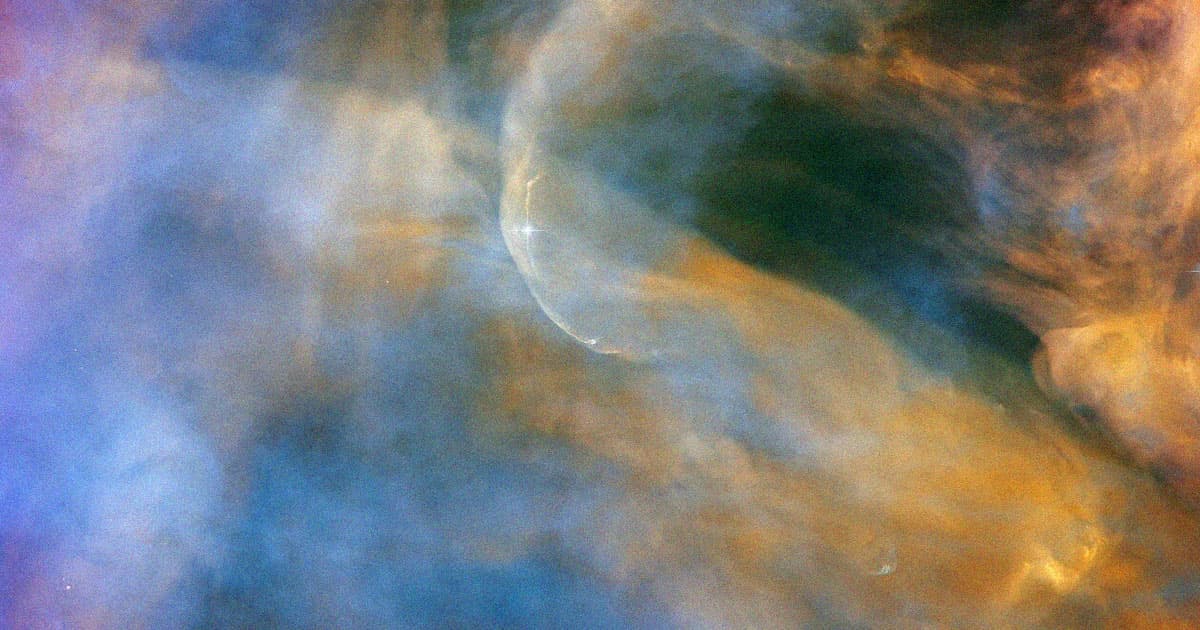 Hubble's still got it.

Hubble's still got it.

A Star Is Born

NASA's Hubble Space Telescope may be quite a bit older than its groundbreaking successor, but as an incredible new image of the Orion Nebula goes to show, it's still delivering some mind-blowing new images of the cosmos.

This "celestial cloudscape," as the European Space Agency (ESA) refers to it, is what is known as a "Herbig-Haro object," which are the glowing clouds that surround stars as they're born.

Herbig-Haro objects, "are formed when stellar winds or jets of gas spewing from these newborn stars form shockwaves colliding with nearby gas and dust at high speeds," according to the ESA.

And, needless to say, the resulting composite image of the object is absolutely breathtaking.

The gigantic Orion Nebula is one of the most studied objects in space both because of its massive size — it spans 24 light-years across — and because it's only about 1,000 light years away from Earth. In the right conditions, it can even be seen by the naked eye from Earth.

Although it's been photographed on plenty of occasions, this latest image of the Orion Nebula is actually a composite of a whopping 520 exposures, showcasing an astonishing amount of detail.

"The outflows themselves are visible as gracefully curving structures at the top and bottom of this image," the ESA waxes in its description. "Their interaction with the large-scale flow of gas and dust from the core of the nebula distorts them into sinuous curves."

Most of us can't muster that kind of flowery, sensuous prose for our significant others, much less for objects further away than we could ever hope to travel in our lifetimes.

But then again, most of us aren't astrophysicists, either.

More on Hubble: NASA Releases Hubble Image of Most Distant Star Ever Seen

Little Boxes
One Silly Little Detail Is Reportedly Delaying Artemis II by Years
12. 8. 22
Read More
Putting Things In Perspective
Amazing Artemis Photo Shows Every Human, Alive or Dead, Plus the Moon
11. 29. 22
Read More
Psychological Warfare
Experts Excoriate NASA Report Claiming James Webb Wasn't Homophobic
11. 19. 22
Read More
+Social+Newsletter
TopicsAbout UsContact Us
Copyright ©, Camden Media Inc All Rights Reserved. See our User Agreement, Privacy Policy and Data Use Policy. The material on this site may not be reproduced, distributed, transmitted, cached or otherwise used, except with prior written permission of Futurism. Articles may contain affiliate links which enable us to share in the revenue of any purchases made.
Fonts by Typekit and Monotype.