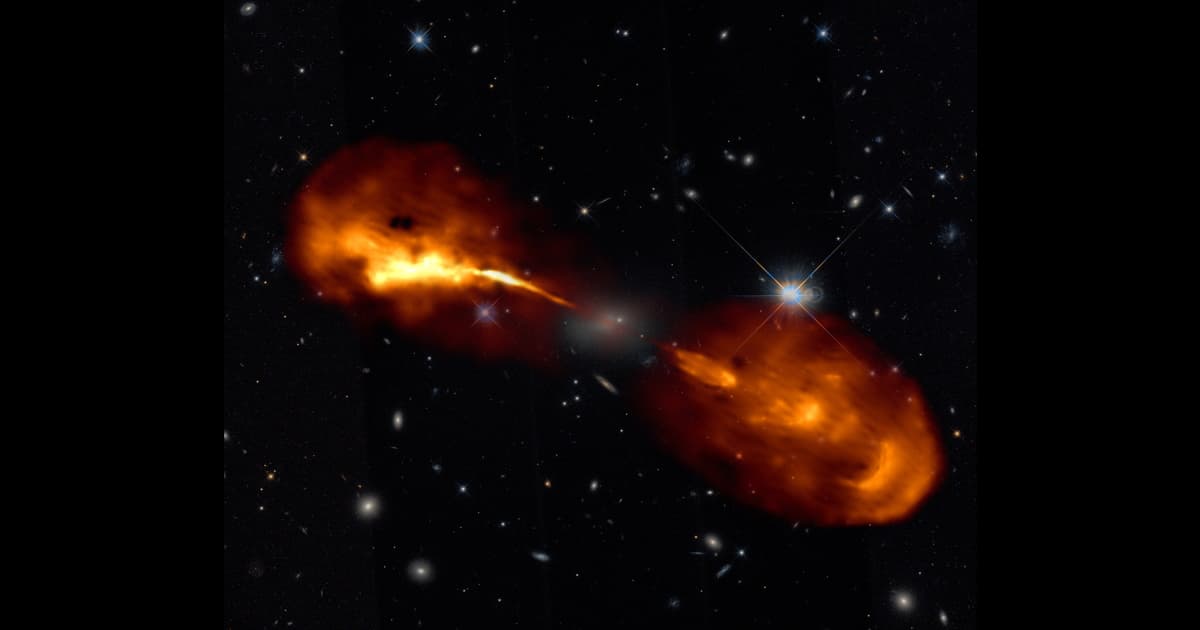 Astronomers Capture Most High-Resolution Images of Deep Space Yet

One shows a stunning view of black hole jets.

One shows a stunning view of black hole jets.

Researchers have captured the most detailed images of deep space yet using radio antennas.

Astronomers working with a network of more than 70,000 radio telescopes known as the Low Frequency Array (LOFAR) captured the images over the course of 10 years, according to Space.com. The images allow researchers to glimpse at space phenomena that they wouldn’t normally be able to using optical telescopes.

"Regions of space that seem dark to our eyes, actually burn brightly in radio waves — allowing astronomers to peer into star-forming regions or into the heart of galaxies themselves," said a statement released by the Netherlands Institute for Radio Astronomy (Astron), which manages LOFAR.

Astronomers recently captured some of the most detailed, high-res images we have of deep space yet using the LOFAR radio telescope network. Below is one of the images (Hercules A, a supermassive blackhole, shooting out jets of gas)🔭 pic.twitter.com/SqaKgg0QMn

From this image, researchers discovered that this jet "grows stronger and weaker every few hundred thousand years," Astron said in the statement.

LOFAR Beats to Study/Relax to

Perhaps one of the coolest parts about LOFAR is the fact that the researchers behind it want to democratize the array. In fact, astronomers all over the world will be able to use it to create images of their own.

"Our aim is that this allows the scientific community to use the whole European network of LOFAR telescopes for their own science, without having to spend years to become an expert," said Dr. Leah Morabito, assistant professor of physics at Durham University in England, in the statement.

To learn more, here’s a link to all the papers surrounding the recent LOFAR discoveries and initiatives. Word of warning: It's still pretty complex for the layman. If you can wrap your mind around it though, have at it!

Overall, this is a boon to all astronomers and space enthusiasts everywhere. Not only will it allow researchers to make more discoveries about a notoriously difficult-to-study field of space, it gives us all the tools we need to do our own research — which will undoubtedly lead to more discoveries in the future.

RIP
Iconic Arecibo Alien-Hunting Observatory Will Be Demolished
11. 19. 20
Read More
ET Phone Home
NASA Funds Giant Radio Telescope Concept on Far Side of Moon
4. 7. 20
Read More
No Ethics
San Francisco Cops Now Allowed to Use Robots to Kill People
5:54 PM
Read More
+Social+Newsletter
TopicsAbout UsContact Us
Copyright ©, Camden Media Inc All Rights Reserved. See our User Agreement, Privacy Policy and Data Use Policy. The material on this site may not be reproduced, distributed, transmitted, cached or otherwise used, except with prior written permission of Futurism. Articles may contain affiliate links which enable us to share in the revenue of any purchases made.
Fonts by Typekit and Monotype.