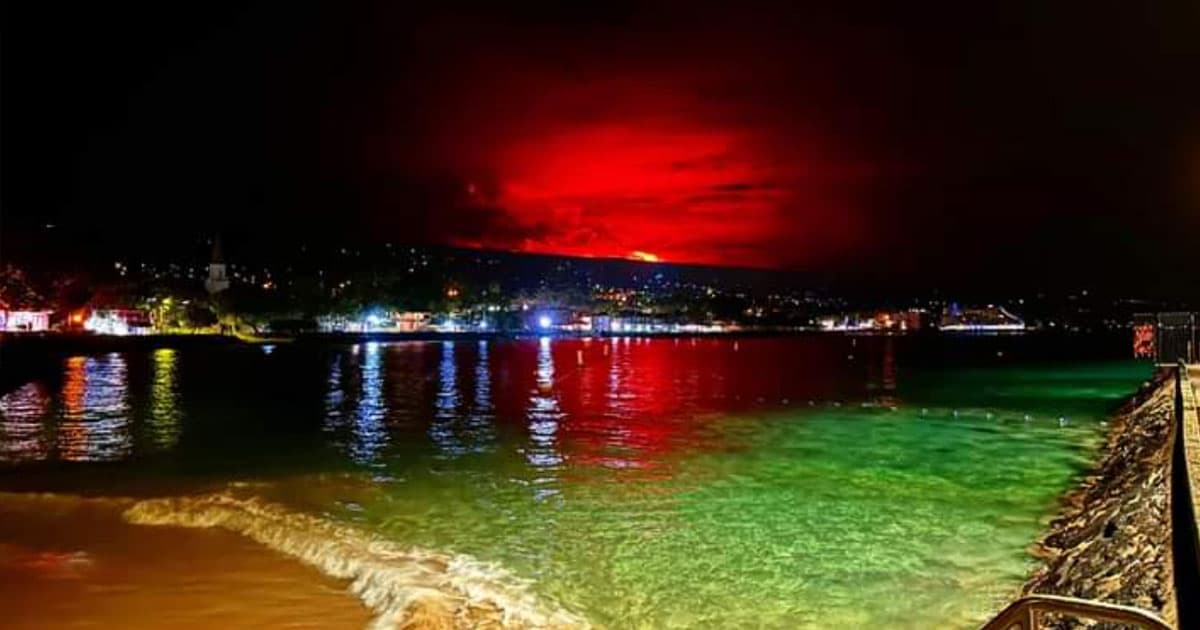 The world's biggest active volcano is erupting for the first time since Ronald Reagan was president.

For the first time since 1984 and just in time for Hawaiian Independence Day, the Mauna Loa volcano has come to life — and authorities like the United States Geological Survey are warning Big Island residents to remain vigilant.

As the USGS' Hawaiian Volcano Observatory notes in an update, the threat level has been upped from "advisory" to "warning," though the "lava flows are contained within the summit area and are not threatening downslope communities" just yet.

"Based on past events," however, "the early stages of a Mauna Loa eruption can be very dynamic and the location and advance of lava flows can change rapidly."

Those downwind of the eruption may be at risk from a number of light projectiles, the USGS added, which include volcanic gas, fine ash, or Pele's hair, the strand-like glass fibers that sometimes result from eruptions and are aptly named for the Hawaiian volcano god Pele.

Mauna Loa is erupting for the first time in nearly four decades on the Big Island of Hawaii. The USGS has more on what is happening and may happen next. (It's difficult to predict. The skies are rather omninous in Kailua-Kona.https://t.co/tuP5Sv2rBZ https://t.co/fHjE0tC9CJ

As Hawaii's National Park Service notes, the world's largest active volcano used to erupt once every five years and has done so 33 times since 1843, the year the islands gained independence from Britain and France. Even so, it's been 38 years since its last eruption, which until this weekend was "the volcano's longest quiet period since written records have been kept," the NPS added.

That said, the USGS is hoping that this time, the eruption will stay contained to the summit's Moku‘āweoweo caldera.

"However," the government advisory added, "if the eruptive vents migrate outside its walls, lava flows may move rapidly downslope."

It's been a long time coming, and hopefully the eruption will remain a fascinating geological curiosity and not trigger tragedy.

More on volcanoes: A New Island Just Appeared in the Pacific Ocean

We Could Power the World With Volcanoes
11. 15. 17
Read More
Satellites Will Soon Predict Earthquakes and Volcanic Eruptions From Space
9. 6. 17
Read More
Blazing a Trail: Hawaii Becomes the First U.S. State to Commit to the Paris Climate Accords
6. 8. 17
Read More
+Social+Newsletter
TopicsAbout UsContact Us
Copyright ©, Camden Media Inc All Rights Reserved. See our User Agreement, Privacy Policy and Data Use Policy. The material on this site may not be reproduced, distributed, transmitted, cached or otherwise used, except with prior written permission of Futurism. Articles may contain affiliate links which enable us to share in the revenue of any purchases made.
Fonts by Typekit and Monotype.