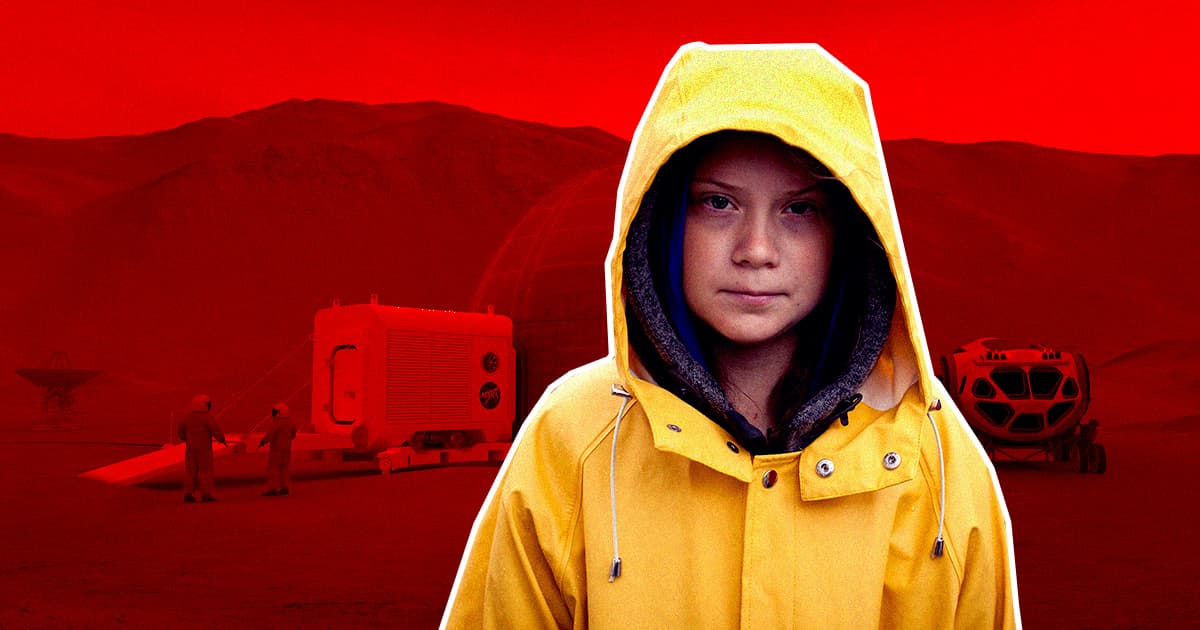 A new satirical video ad created by the Fridays for Future (FFF) campaign, an environmental movement founded by Nobel Peace Prize nominee Greta Thunberg, pokes fun at the idea of having the "one percent" escape from a planet that's in dire straits to settle on Mars.

It's a provocative idea — but the execution arguably paints a much rosier picture of a one-way trip to Mars, rather than making a provocative and convincing argument about climate change. In other words, a little too much escapism and too little biting satire.

The video was released in anticipation of NASA's Perseverance rover attempting its landing on the Martian surface on Thursday.

"After more than 5 million years of human existence on Earth, it's time for a change," a voiceover says in the video. "Mars, 56 million square miles of untouched land, breathtaking landscapes, and incredible views."

"Mars, an untainted planet, a new world where we can begin again," the voice says. "Mars offers the ultimate freedom."

A message at the end of the video reads: "And for the 99 percent who will stay on Earth, we'd better fix climate change."

It's an effective tourism ad for Mars — and, confusingly, that's what the video's creators were going for.

"We wanted to highlight pure nonsense," a FFF spokesperson told told Euronews. "Government-funded space programs and the world’s ultra-wealthy one percent are laser focused on Mars (NASA’s Perseverance Rover alone cost $2.7 billion for development, launch, operations and analysis) – and yet, most humans will never get a chance to visit or live on Mars."

It's a striking ad, but its messaging does get muddled. Selling us on the idea of traveling to a distant planet for a new beginning may not be the most effective way to raise awareness about Earth's own catastrophic predicament.

For instance, pointing out NASA's budget to explore the Martian surface feels a bit misplaced. The United States government allocated just shy of $700 billion to the Department of Defense in 2019, and only $21.5 billion were allocated to NASA's science and human exploration programs.

It seems perfectly plausible, in other words, that the world can afford to fight climate change and explore the solar system.

READ MORE: NEW SATIRICAL ADVERT EXPLAINS WHY THE ELITE 1% WILL MOVE TO MARS

Martian Oases
Scientist Proposes Growing a Forest Inside a Bubble on Mars
Dec 3
Read More
Big Impact
Meteorite Hit Mars So Hard NASA Thought It Was a Quake
Oct 28
Read More
Palliative Care
NASA's Mars Lander Refuses to Die Even Though It's Supposed To
Sep 24
Read More
+Social+Newsletter
TopicsAbout UsContact Us
Copyright ©, Camden Media Inc All Rights Reserved. See our User Agreement, Privacy Policy and Data Use Policy. The material on this site may not be reproduced, distributed, transmitted, cached or otherwise used, except with prior written permission of Futurism. Articles may contain affiliate links which enable us to share in the revenue of any purchases made.
Fonts by Typekit and Monotype.