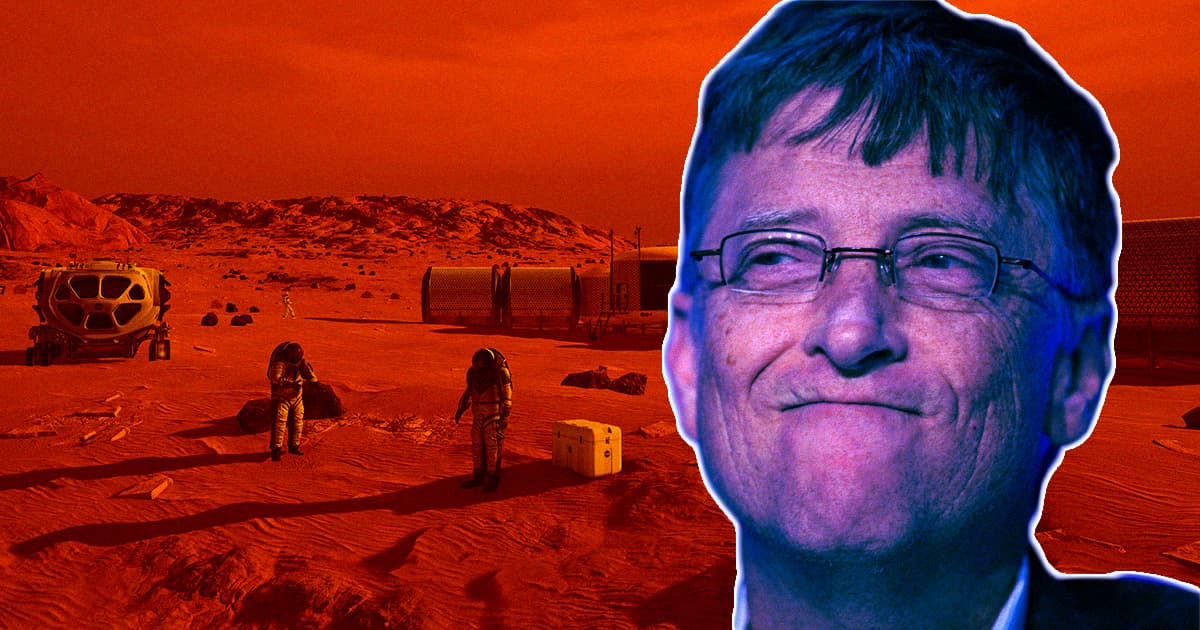 Bill Gates Says That Going to Mars Is Silly

He also had something to say about fellow billionaire Elon Musk.

He also had something to say about fellow billionaire Elon Musk.

When it comes to securing humanity's survival in the face of climate change, billionaire Microsoft founder Bill Gates would rather save Earth than flee from it.

Escaping to Mars, a dream goal for SpaceX CEO Elon Musk and other techno-utopian thinkers, just isn't for him, Gates said on The New York Times' podcast Sway. Instead, he argues that there's more important work to be done here on Earth, like investing in decarbonizing various industries or developing and distributing vaccines. Compared to all that, Gates simply doesn't see the appeal of traveling — or escaping — to the Red Planet.

To be fair, Gates also took time to commend Musk on the podcast, saying that what he accomplished with his electric vehicle company Tesla is "one of the greatest contributions to climate change anyone's ever made."

But he also said that tackling electric vehicles is easy compared to the work it will take to clean up other industries, and investing in rockets or Mars journeys instead of focusing on those other problems is a missed opportunity.

"We're basically not doing enough on the hard stuff: steel, cement, meat," Gates said. "And sadly, the things people think about — the electricity, passenger cars — are a third of the problem. So we have to work on the two-thirds."

When it comes to rockets, and especially rockets to Mars, Gates says he'd rather spend his money on things like vaccines or other measures to help people on Earth.

When it comes to that cost-benefit analysis, in other words, the vaccines will win every time — and Bill Gates is a practical guy.

READ MORE: Innovation, Not Trees. How Bill Gates Plans to Save the Planet. [The New York Times]

A Sip of Opal
NASA Discovers Precious Gemstones on Mars
Jan 9
Read More
Shot Well
Head of NASA Relieved to Hear Elon Musk Isn't REALLY Running SpaceX
12. 12. 22
Read More
Pale Blue Shat
William Shatner Explains Why His Trip to Space Was Horrible
12. 9. 22
Read More
+Social+Newsletter
TopicsAbout UsContact Us
Copyright ©, Camden Media Inc All Rights Reserved. See our User Agreement, Privacy Policy and Data Use Policy. The material on this site may not be reproduced, distributed, transmitted, cached or otherwise used, except with prior written permission of Futurism. Articles may contain affiliate links which enable us to share in the revenue of any purchases made.
Fonts by Typekit and Monotype.