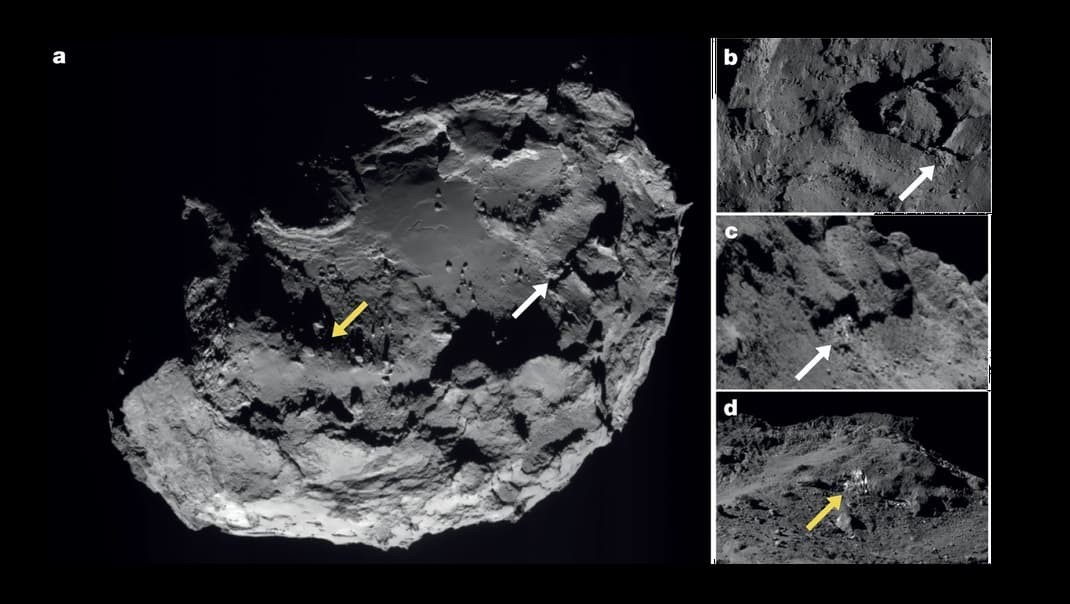 After becoming the first spacecraft to land its probe on a comet and orbit it, the European Space Agency’s Rosetta orbiter was able to spot water ice on the face of a comet, in this case, 67P Churyumov-Gerasimenko. This marks a first ever find in space and astronomy.

In a research letter which first appeared in Nature, the scientists behind the finding began by saying that they’ve known for quite some time that “water vapor is the main species” found in the coma – the big cloud gas surrounding the comet’s nucleus – and that water is the main component of the comet’s nucleus. However, up until this recent discovery (this very recent discovery), very little evidence has been gathered to prove the presence of exposed water ice on the surface of the comet.

The water ice was found in two debris falls in the Imhotep region of comet 67P and was found on both the walls and the base of the elevated comet structures.

In an interview with the LA Times, Jet Propulsion Laboratory planetary scientist Murthy Gudipati and one of the proponents of the research letter said "First, not finding ice was a surprise; now, finding it is a surprise. It is exciting because now we are starting to understand the upper dynamic layers of the comet and how they evolved."

The water ice was found using the VIRTIS infrared instrument which detected the water ice as prominent bright patches in visible light.

There were two sizes of water ice particles that were detected, which is indicative of the difference in the way they form—micrometers-sized and millimeters-sized.

The water ice grains that are micrometers in size are formed when water from the coma condenses on the comet’s thin uppermost surface layer when the region rotates away from the Sun. When it’s “daytime” again in this region, the water ice evaporates back into the coma.

On the other hand, the pure water ice grains that are millimeters in size could have formed when water ice on the comet’s subsurface vaporizes as it moves closer to the Sun. When the comet moves away from the Sun, the vaporized water ice moves down to the comet’s colder layer where it gets a secondary growth of ice crystals.

Before this discovery, scientists don’t know how deep the water ice goes in comets. According to Gudipati, this new discovery may indicate that water ice may only go a few feet beneath the surface.