Unlocking the Secrets of our Solar System 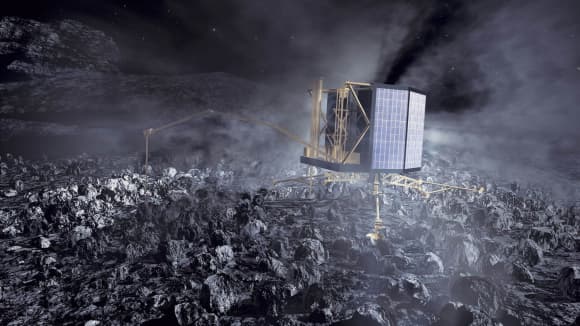 Why is understanding the composition and surface of asteroids or other minor celestial bodies like comets so important? One of the answers is that these leftovers from the formation of the planets may hold the key to unlocking the mysteries of life’s beginning.

Last year the European Space Agency’s (ESA) Rosetta spacecraft entered the orbit of comet 67P/Churyumov-Gerasimenko to unveil the secrets of the origin of life. It was planned that its Philae lander would collect crucial data while studying the comet’s surface, but it went silent shortly after the landing. However, amid the failure, the stranded probe was able to send important information, including the findings regarding the magnetic field of comet’s nucleus. This may help us uncover some of the information that we seek, as studying such properties of asteroids and comets can provide clues to the role that magnetic fields played in the formation of Solar System.

In the past decade, we've come a long way towards understanding our distant, icy (and not so icy) cousins, and in spite of the mishaps and failures, the future is looking rather promising; however, according to new research,we still have some ways to go.

For example, asteroid photometry has witnessed important advancements driven by spacecraft observations that collected spatially resolved imaging and spectroscopy data. In a paper published on May 18 at arXiv.org, a team of researchers review the new developments in asteroid photometry in the three complementary areas of observations, laboratory work, and theory. They also discuss the implications of recent findings.

Asteroid photometry provides clues about the physical properties and compositions of asteroidal surfaces. However, despite the development of various theoretical models, empirical or semi-physical, the scientists notice that we are still far from being able to fully determine all surface physical conditions from photometric observations and modeling of asteroids.

“The major reason is that real asteroidal surfaces have complex physical conditions that are difficult to fully parameterize,” the researchers write in the paper. “We still do not fully understand the light scattering effects of some physical conditions, such as roughness, porosity, etc.”

“For example, phase reddening is a common phenomenon and has been recognized on many asteroids and for a long time that causes the spectrum of a surface to have redder slopes and stronger spectral absorptions at higher phase angles,” the paper reads. “One has to correct for this in order to make meaningful mineralogical interpretations of reflectance spectra.”

The scientists also consider another practical application for asteroid photometry, crucial for spacecraft exploration missions to these celestial bodies. Spacecraft usually observe target asteroids at substantially different viewing geometries from ground-based observers. Thus, it is required to extrapolate or interpolate the photometric measurements from the ground to determine the nominal brightness of a target for planning purposes.

Most asteroids appear to be point sources when observed from the ground, and the dependence of reflectance on local scattering geometry is unavailable. Until the first asteroid flyby of (951) Gaspra by the Galileo spacecraft en route to the Jupiter system in 1991, asteroid photometry concentrated only on studying the dependence of total brightness of an object on solar phase angle.

“The most significant development in observational studies of the photometric properties of asteroids over the past decade has come from the availability of high-resolution, spatially resolved images of the surfaces of many more asteroids from flyby and rendezvous missions with asteroids,” the researchers reveal. “From these data, we can observe how the reflectance of an asteroidal surface depends on local scattering geometries. This additional information is more powerful for retrieving the physical properties of a surface than the disk-integrated solar phase function only.”

Of the seven newly imaged asteroids, the data of (25143) Itokawa, (2867) Šteins, (21) Lutetia, and (4) Vesta are of satisfactory resolution and quality to perform detailed, disk-resolved photometric studies. No report about the photometric properties of (4179) Toutatis from the Chinese Chang’e 2 flyby images has yet become available.

For example, the photometric analysis in the visible and near-infrared wavelengths suggested a remarkably uniform surface of Ceres in its albedo and color. Compared with other solar system objects with their surface photometric variations determined, Ceres certainly has the most uniform surface so far.

The near-future NASA’s OSIRIS-REx mission will obtain large numbers of repeated observations of the surface of asteroid (101955) Bennu, sampling a wide range of viewing angles for each surface facet. It will help scientists learn more about the time before the formation and evolution of the Solar System, initial stages of planet formation, and the source of organic compounds which led to the formation of life.

The scientists conclude that future work should synthesize spacecraft, laboratory, and ground-based surveys of asteroid surface physical properties and their compositional dependence.

Read This Next
Putting Things In Perspective
Amazing Artemis Photo Shows Every Human, Alive or Dead, Plus the Moon
Fighting Words
Retired NASA Astronaut Scott Kelly Dishes on Ukraine, Russia, and Moon Mission
Psychological Warfare
Experts Excoriate NASA Report Claiming James Webb Wasn't Homophobic
Monkey Business
China Plans to Send Monkeys to Space Station to Have Sex With Each Other
Big Impact
Meteorite Hit Mars So Hard NASA Thought It Was a Quake
More on Off World
Appetite for Dest...
Thursday on the byte
Black Hole In "Hyper-Feeding Frenzy" Chews Through Stars and Shoots Its Leftovers Towards Earth
Lunar RGB
Wednesday on the byte
NASA Shows Off Artemis "Party Mode," Powered by Amazon (TM) Alexa (TM)
Love It or List It
Tuesday on the byte
NASA Hires Company to 3D Print American Base on the Moon
READ MORE STORIES ABOUT / Off World
Keep up.
Subscribe to our daily newsletter to keep in touch with the subjects shaping our future.
+Social+Newsletter
TopicsAbout UsContact Us
Copyright ©, Camden Media Inc All Rights Reserved. See our User Agreement, Privacy Policy and Data Use Policy. The material on this site may not be reproduced, distributed, transmitted, cached or otherwise used, except with prior written permission of Futurism. Articles may contain affiliate links which enable us to share in the revenue of any purchases made.
Fonts by Typekit and Monotype.