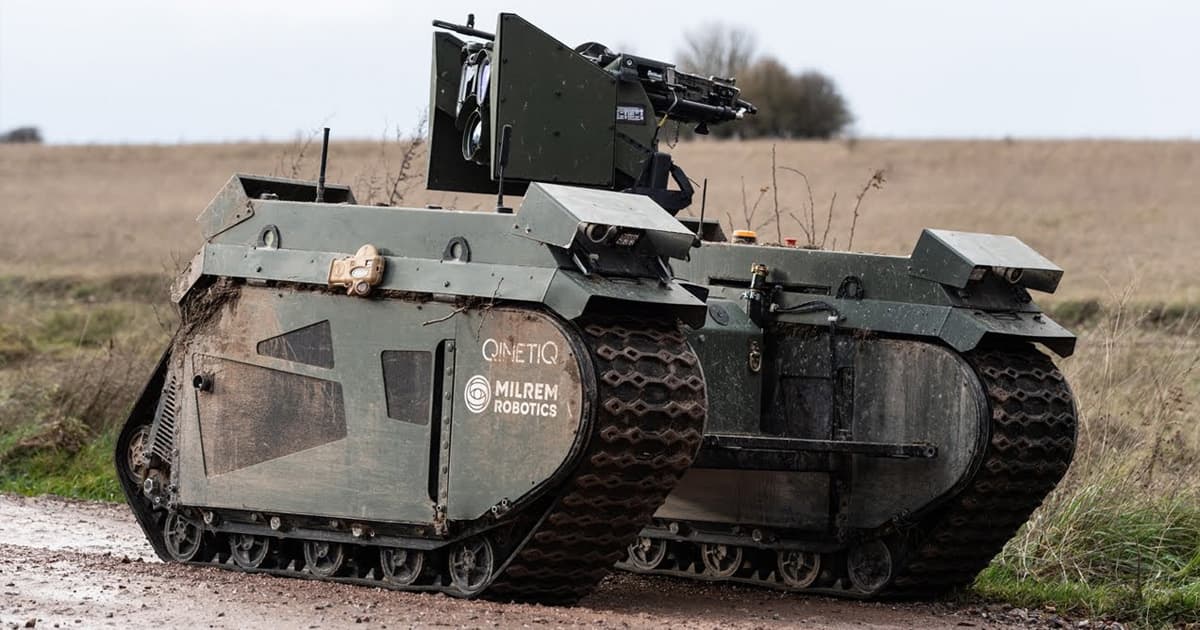 Over the next decades, the British army may enlist tens of thousands of robotic soldiers.

General Nick Carter, chief of defense staff for the British army, suggests that new drones and robots could make up a significant fraction of the armed forces, The Guardian reports. Part of the plan is to compensate for a drop in the number of human recruits — but, at the same time, Carter admits that the future of robotic warfare is hazy.

Carter said that a massive push for a robotic military, in which large numbers of autonomous or remote-controlled robotic soldiers replace human fighters, could be operational by the 2030s, according to The Guardian.

"I mean, I suspect we could have an army of 120,000, of which 30,000 might be robots, who knows," Carter said, later clarifying that he wasn't committing to any specific numbers.

Every branch of the British military is already experimenting with military drones, The Guardian reports, like the i9 — a rotorcraft equipped with two shotguns — that's meant to be piloted into hostile buildings.

But even so, Carter warns that a future including automated warfare is a future in which wars could accidentally begin based on one error — he warned about "escalation [leading] to miscalculation."

"I'm saying it's a risk and we need to be conscious of those risks," he told the Guardian.

READ MORE: 'Robot soldiers could make up quarter of British army by 2030s' [The Guardian]

From Sci-Fi to Reality: The Future of Warfare
1. 17. 17
Read More
Future Warfare: Meet The Electromagnetic Railgun
5. 13. 16
Read More
Cow Chow
Bill Gates Gives $12 Million to Flatulent Australian Cows
10:15 PM
Read More
+Social+Newsletter
TopicsAbout UsContact Us
Copyright ©, Camden Media Inc All Rights Reserved. See our User Agreement, Privacy Policy and Data Use Policy. The material on this site may not be reproduced, distributed, transmitted, cached or otherwise used, except with prior written permission of Futurism. Articles may contain affiliate links which enable us to share in the revenue of any purchases made.
Fonts by Typekit and Monotype.