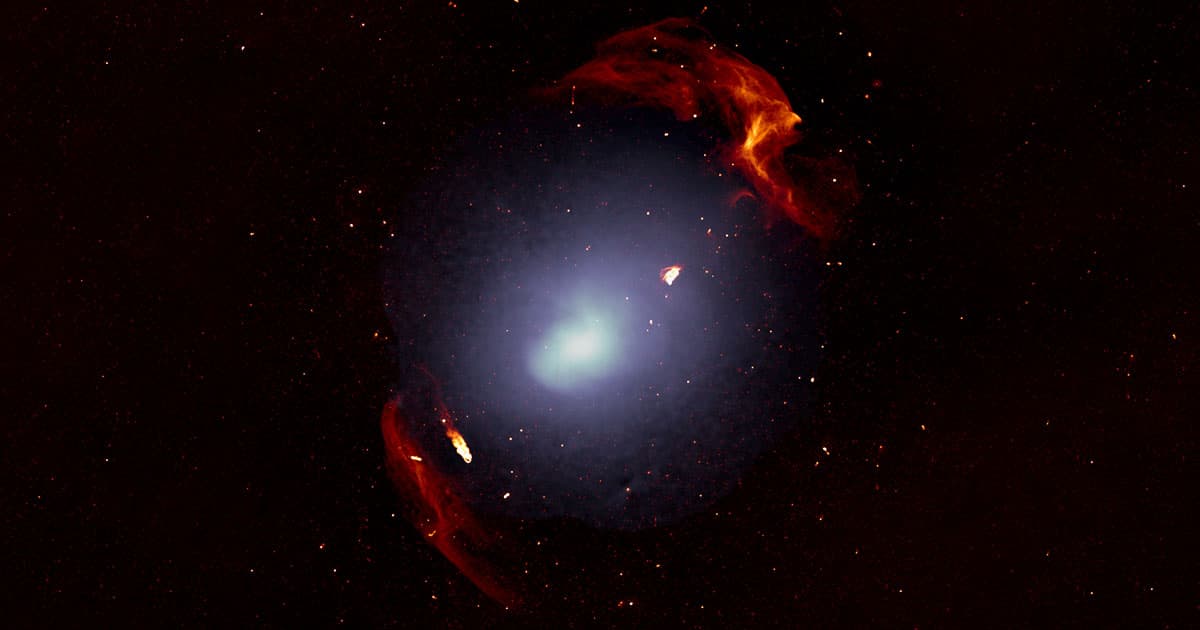 It makes your head spin.

It makes your head spin.

Two gigantic clusters of galaxies smashed into each other around a billion years ago — and the collision's shockwaves spread so far that they absolutely dwarf our own galaxy.

The structures, recently captured by a team of astronomers using the MeerKAT radio telescope in South Africa, stretched to a width of roughly 6.5 million light years. The Milky Way, in comparison, spans a mere 100,000 light years.

These kinds of collisions are the most powerful events we know of in the universe, and remain mysterious — shockwaves that aren't entirely dissimilar to the sonic booms created by aircraft going faster than the speed of sound, scientists say, except at a scale that defies comprehension.

One of these shockwaves spotted by the MeerKAT radio telescope, dubbed Abell 3667, rippled across intergalactic space at 1500 kilometers a second, or a staggering 3.3 million mph.

"These structures are full of surprises and much more complex than what we initially thought," said Francesco de Gasperin from the University of Hamburg, lead author of a new study about the phenomenon published in the journal Astronomy & Astrophysics, in a statement.

"The shock waves act as giant particle accelerators that accelerate electrons to speeds close to the speed of light," he added. "When these fast electrons cross a magnetic field they emit the radio waves that we see."

These radio waves form "an intricate pattern of bright filaments" showing us the boundaries of these magnetic field lines.

Abell 3667 is around 700 million light years away, which in the scale of the intergalactic universe is actually relatively close by, as ScienceAlert points out.

The team's study shows just how complex these collisions are, unveiling intricate internal structures and magnetic field lines. And they hope to learn more soon.

"Thanks to its sensitivity to polarized radiation, MeerKAT will be transformational in the study of these complex phenomena," the researchers conclude in their paper.

More on galaxy clusters: Scientists Puzzled by Weird "Strands" at the Center of Our Galaxy

Dark Matter Mystery
Dark Matter's Effect Is 10x What It Should Be, Scientists Say
9. 11. 20
Read More
Weak Black Holes
NASA Finds Supermassive Black Hole Birthing Stars at "Furious Rate"
11. 19. 19
Read More
Shell Game
Florida Officials Alarmed by Invasion of Giant Snails That Can Cause Meningitis
5:27 PM
Read More
+Social+Newsletter
TopicsAbout UsContact Us
Copyright ©, Camden Media Inc All Rights Reserved. See our User Agreement, Privacy Policy and Data Use Policy. The material on this site may not be reproduced, distributed, transmitted, cached or otherwise used, except with prior written permission of Futurism. Fonts by Typekit and Monotype.