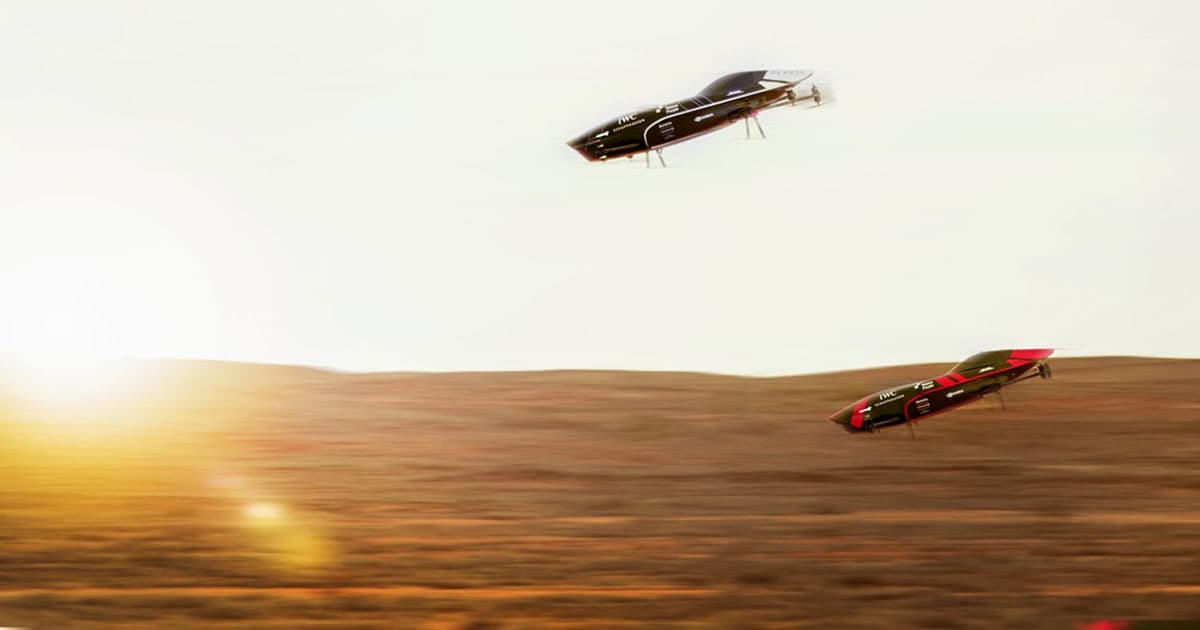 Is this the future of motorsports?

Is this the future of motorsports?

The company set two teams against each other in a drag race in the Australian desert — the first of many events still to come, it says.

The slick, aerodynamic cars, both the Airspeeder Mk3 model that was unveiled back in June, sped along a predetermined path and reached speeds of over 96 mph during the video.

While the cars were still being controlled remotely by pilots back on the ground, it's an exhilarating demonstration and a small taste of what's still in store: honest-to-goodness, human piloted flying car racing — which could very well turn out to be the future of motorsports.

Alauda Racing is now looking to organize an entire tournament called EXA, pitting several teams against each other, as seen in a flashy teaser video.

The company is also hard at work developing the Mk4, its first human piloted racing car, which is slated to make its debut some time next year.

The cars can accelerate from 0 to 62 mph in just 2.3 seconds, which is hypercar territory. They also only weigh 220 pounds apiece thanks to a carbon fiber fuselage.

To ensure human pilots don't get hurt, Alauda Racing is looking to use LiDAR and other radar technologies to create "virtual forcefields" around each car. The technology could also allow "really close quarter motorsport action," according to a recent explainer video.

The race is only starting to heat up, and we'll be at the front of the line as soon as the league really starts kicking off, so stay tuned.

Air Ferry
Paris Will Use Electric Flying Cars to Get Passengers to the Olympics
11. 27. 21
Read More
Green Flying Cars
Study: Flying Cars Could End Up Being Greener Than Electric Cars
4. 30. 19
Read More
Formula E
Mercedes-Benz' First All-Electric Racecar Is Equipped Like a Beast
3. 4. 19
Read More
+Social+Newsletter
TopicsAbout UsContact Us
Copyright ©, Camden Media Inc All Rights Reserved. See our User Agreement, Privacy Policy and Data Use Policy. The material on this site may not be reproduced, distributed, transmitted, cached or otherwise used, except with prior written permission of Futurism. Articles may contain affiliate links which enable us to share in the revenue of any purchases made.
Fonts by Typekit and Monotype.