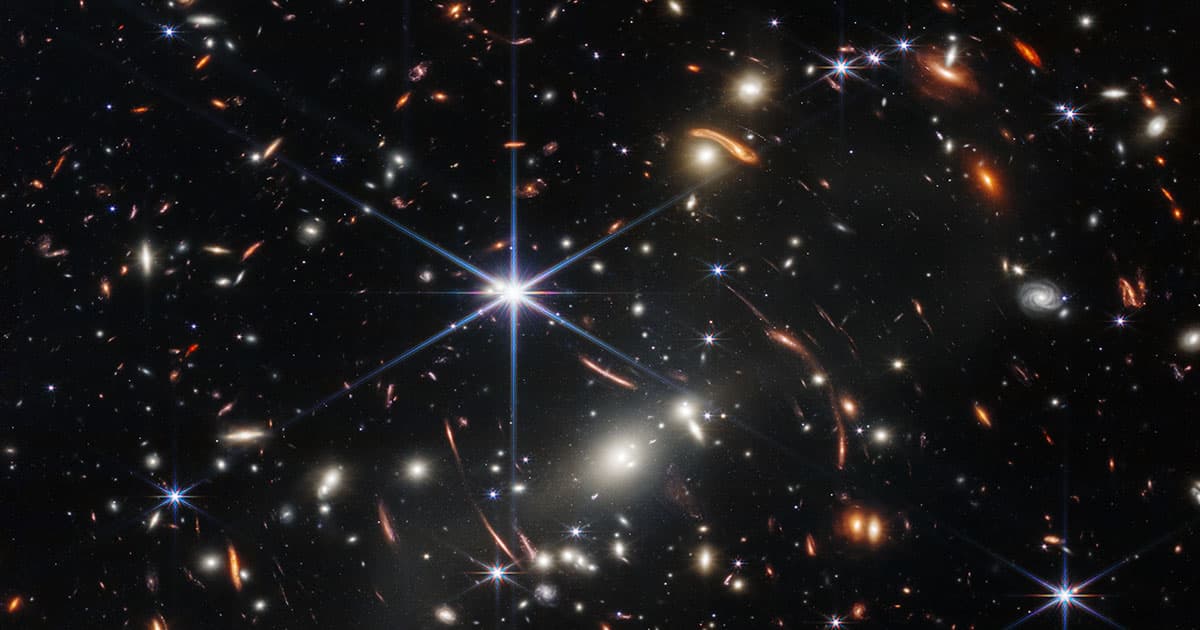 We've never seen the universe this way before.

The fascinating image — the highest-resolution view of the infrared spectrum ever produced — shows "just a little speck of the universe," as NASA administrator Bill Nelson explained, including light emanating from distant galaxies over 13 billions light-years away.

"if you held a grain of sand on the tip of your finger at arm's length, that is the part of the universe you're seeing," Nelson added, promising images of even older galaxies, even further away as the telescope gears up for future observations.

Until now, NASA's Hubble space telescope has held the cosmic distance record, peering at the most distant galaxy ever recorded an astonishing 13.4 billion lightyears away back in 2016.

The news comes after NASA announced that all of the telescope's seventeen "modes" to operate its various instruments have been checked out, a green light for full scientific operations to begin.

👀 Sneak a peek at the deepest & sharpest infrared image of the early universe ever taken — all in a day’s work for the Webb telescope. (Literally, capturing it took less than a day!) This is Webb’s first image released as we begin to #UnfoldTheUniverse: https://t.co/tlougFWg8B pic.twitter.com/Y7ebmQwT7j

Decades in the Making

The image is the culmination of decades of research, engineering challenges, and over $10 billion in funding. The telescope launched from French Guiana in December, reaching its final orbit roughly a million miles away from Earth in January.

Fortunately, we still have at least four additional images to look forward to this week. NASA is set to release the remaining shots from the telescope's first batch tomorrow at 10:30am EDT, so stay tuned.

Needless to say, today's announcement is one heck of a start to scientific operations — and we can't wait to see what the space observatory still has in store for us.

More on the observatory: Here's What to Expect From James Webb's First Images