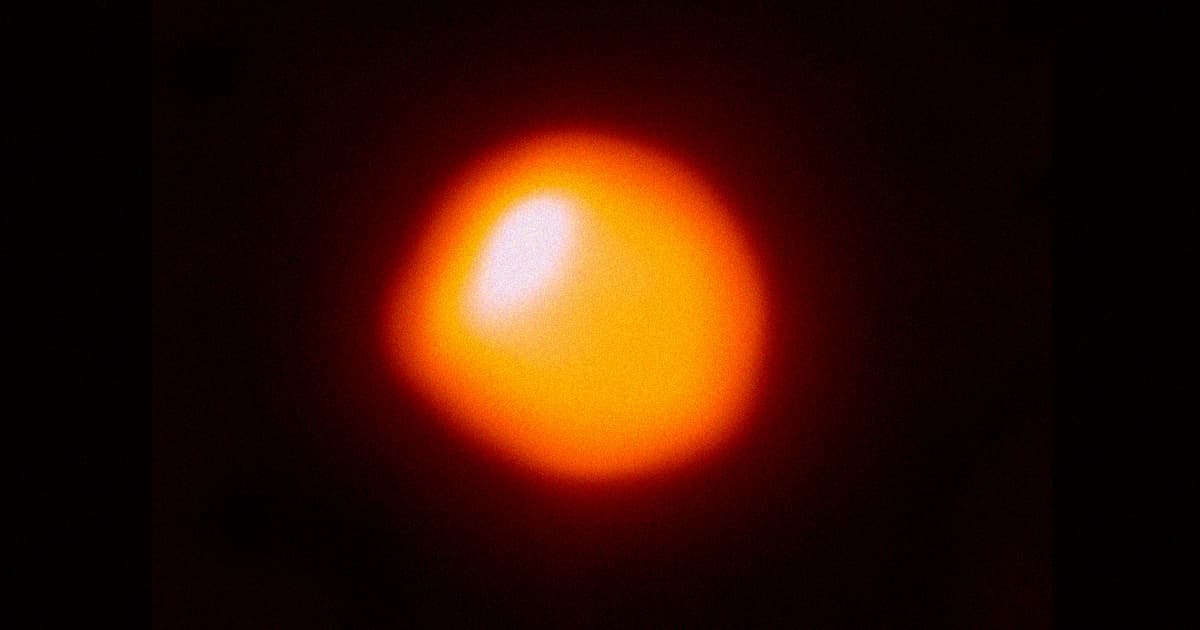 Stardust in the Making

Supergiant Star Betelgeuse Dimmed Mysteriously, and Now We Know Why

"We have directly witnessed the formation of so-called stardust."

"We have directly witnessed the formation of so-called stardust."

In late 2019, astronomers noticed something strange: Betelgeuse, a red supergiant in the Orion constellation some 550 light years away from Earth (and the tenth brightest star in the night sky), abruptly dipped in brightness.

The strange event, now dubbed the "Great Dimming," had scientists scratching their heads — and leading some to believe it's about to blow up in a supernova.

But thanks to a team of scientists, who used the Very Large Telescope (VLT) in Chile, the dip isn't a sign of the star's imminent demise. It's most likely a gigantic dust cloud coming between us and Betelgeuse.

In a new study published today in the reputable journal Nature, the international team laid out their theory. A dusty veil shaded the star, which caused the surface temperature of the supergiant to cool.

They suggest that prior to the Great Dimming, Betelgeuse let out a massive gas bubble that moved away from it. Thanks to a drop in surface temperature, the gas condensed into solid dust.

"We have directly witnessed the formation of so-called stardust," said Miguel Montargès, astronomer at the Observatoire de Paris in France, and team lead, in an official statement.

"The dust expelled from cool evolved stars, such as the ejection we've just witnessed, could go on to become the building blocks of terrestrial planets and life," said Emily Cannon, astrophysics PhD at KU Leuven in Belgium and co-author, in the statement.

In short, Betelgeuse isn't about to go AWOL — in fact, we haven't witnessed a supernova in our galaxy since at least the 17th century. In fact, it's quite the opposite: a nearby star breathing life into other planets around it.

Editor's note 6/17/2021: This story incorrectly stated the university KU Leuven is in the Netherlands. It is in fact located in Belgium.

More on Betelgeuse: MIT Scientists: Nearby Star Appears to Be Cranking Out Dark Matter

Strange Stars
Astronomers Puzzled by Extremely Peculiar Object in Deep Space
Oct 25
Read More
zombie star
Scientists Puzzled by Star That Exploded in Supernova But Somehow Survived
Jun 28
Read More
Betelgeuse Betelgeuse Betelgeuse
Astronomers: This Star Isn't As Giant As We Thought, Just Closer
10. 16. 20
Read More
+Social+Newsletter
TopicsAbout UsContact Us
Copyright ©, Camden Media Inc All Rights Reserved. See our User Agreement, Privacy Policy and Data Use Policy. The material on this site may not be reproduced, distributed, transmitted, cached or otherwise used, except with prior written permission of Futurism. Articles may contain affiliate links which enable us to share in the revenue of any purchases made.
Fonts by Typekit and Monotype.