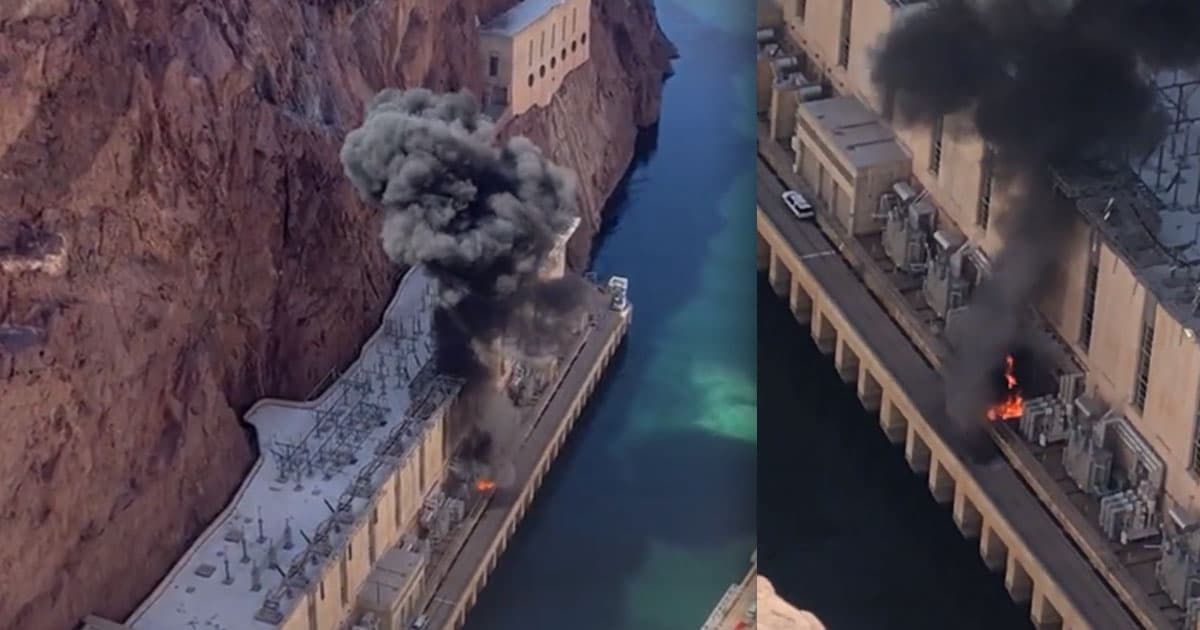 Something Just Exploded at the Hoover Dam

The Boulder City Fire Department responded to an emergency call at the Hoover Dam, a hydroelectric plant and major tourist attraction on the border between Nevada and Arizona, after an apparent explosion.

Videos posted to Twitter showed what appear to be pieces of machinery going up in a blast, releasing a massive billowing cloud of black smoke.

"My goodness, something's just blown up," Kristy Hairston, who was touring the dam on Tuesday, said in her video.

Fortunately, "the fire was extinguished before Boulder City Fire Department arrived on scene," according to an official Boulder City statement.

touring the #hooverdam and heard an explosion #fire pic.twitter.com/1tjWuNWBaZ

Just over an hour later, we finally heard more about the incident.

At around 10am local time a transformer caught fire, according to a statement by the Bureau of Reclamation, a federal agency that oversees water resource management. Roughly 30 minutes later, the fire was later extinguished by the Hoover fire brigade.

"There are no injuries to visitors/employees," the Bureau said in a tweet. "There is no risk to the power grid. Power is still being generated from the powerhouse."

Constructed in the 1930s, the Hoover Dam is one of the largest hydroelectric plants in the US, enclosing Lake Mead, the largest reservoir in the country.

Around seven million tourists come by the dam per year, making it the most visited dam in the world, according to the National Park Service.

Fortunately, it sounds like the incident was small and contained, which meant that nobody got hurt.

The Bureau of Reclamation is now "investigating the cause of the fire" and says it will provide additional updates.

Obama: “The Trend Toward Clean Energy is Irreversible”
1. 10. 17
Read More
Scientists Found a Significant New Source of Greenhouse Gases
10. 2. 16
Read More
Hearing Help
Hearing Aids Will Be Available Over-The-Counter Starting This Fall, FDA Says
Yesterday
Read More
+Social+Newsletter
TopicsAbout UsContact Us
Copyright ©, Camden Media Inc All Rights Reserved. See our User Agreement, Privacy Policy and Data Use Policy. The material on this site may not be reproduced, distributed, transmitted, cached or otherwise used, except with prior written permission of Futurism. Fonts by Typekit and Monotype.