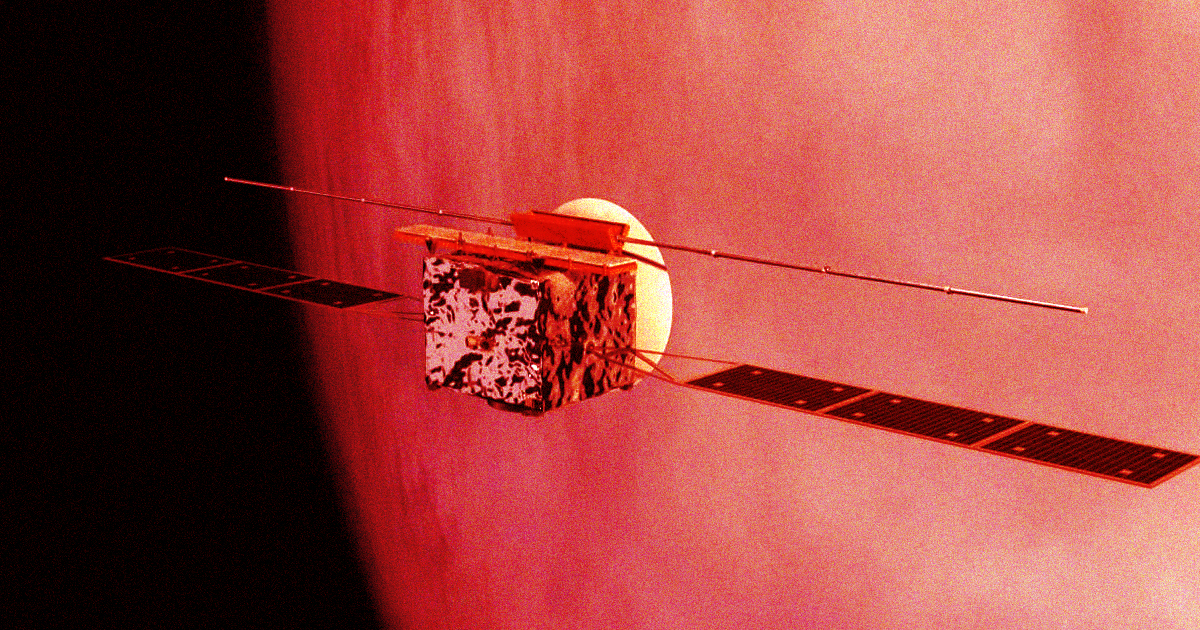 It will get as close as 93 miles from the surface.

It will get as close as 93 miles from the surface.

The European Space Agency is preparing to send an orbital spacecraft to Venus — a feat which will require some out-of-the-box thinking to survive the planet's grueling atmosphere.

In a recent statement, the ESA described the stark difficulties facing its EnVision mission. Topping the list of challenges is our planetary neighbor's "hot, thick atmosphere," which is made up of carbon dioxide and sulfuric acid fumes, making it the hottest planet in our Solar System.

That means the agency will need a detailed plan to safely "surf" the Venusian atmosphere — without having its spacecraft burn up like a marshmallow that got too close to the flames.

As of right now, the ESA is in the process of developing a tried-and-true "aerobraking" method, which involves the spacecraft slowing down significantly so that it can lower its orbit to just above the inner edge of the planet's roiling atmosphere.

At this stage, it will try to collect as much information as possible about the planet below. If all goes according to plan, EnVision will repeat this process over thousands of orbits.

According to EnVision study manager Thomas Voirin, the craft will get as low as 93 miles above Venus' surface to get the best possible images — a process that will require the orbital probe to withstand the planet's hostile atmosphere.

To help it do just that, engineers at the ESA are testing a range of different materials and coatings to protect the spacecraft's delicate scientific instruments.

ESA announced the EnVision mission in 2021 and expects to have it arrive at Venus in the "early 2030s," which is only a few years after NASA's slated 2029 launch date of its ambitious DAVINCI mission, which involves both an orbiter and a descent probe.

Given the many past collaborations between the two agencies — and the timing of their respective missions — they're likely trading notes already.

More Venusian news: MIT Scientists Say Life May Have Been Detected on Venus After All

Mars Rock Blues
Mars Rock Samples Probably Won't Infect Earth With Deadly Martian Plague, Scientist Says
7. 6. 22
Read More
RIP
Unfortunate Comet Flies Too Close to the Sun, Disintegrates and Becomes a Ghost
3. 24. 22
Read More
Three for Three
Europe Is Also Sending a Spacecraft to Explore Venus, a Blazing Hellhole
6. 10. 21
Read More
+Social+Newsletter
TopicsAbout UsContact Us
Copyright ©, Camden Media Inc All Rights Reserved. See our User Agreement, Privacy Policy and Data Use Policy. The material on this site may not be reproduced, distributed, transmitted, cached or otherwise used, except with prior written permission of Futurism. Articles may contain affiliate links which enable us to share in the revenue of any purchases made.
Fonts by Typekit and Monotype.