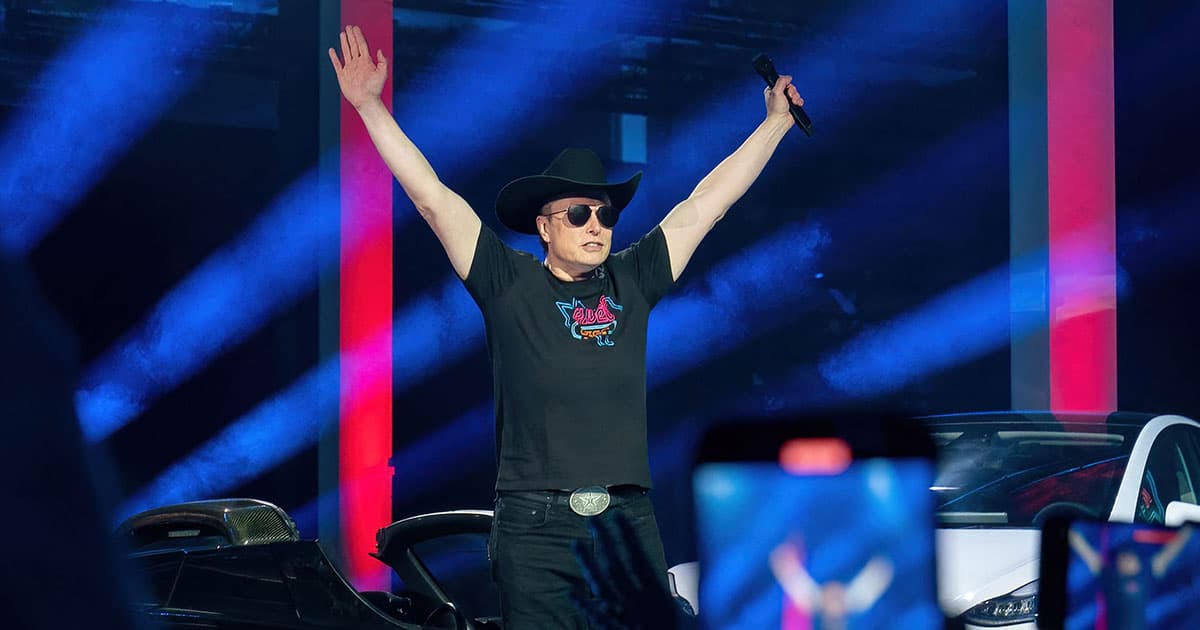 But then, he shared some bad news.

But then, he shared some bad news.

His undyingly loyal fans were immediately ready to draw comparisons to Tony Stark from "Iron Man," and Musk did everything imaginable to play into that narrative.

As if his aviator sunglasses and black cowboy hat look wasn't Hollywood enough — who knows, perhaps that was the intention? — the billionaire CEO decided to roll up to the stage in a black Tesla Roadster while blasting Dr. Dre's iconic 1999 rap song "Still D.R.E."

You can’t tell me @elonmusk is not the real-life version of Tony Stark. pic.twitter.com/9I11KojddU

While opening yet another massive factory is plenty of reason to celebrate, people were less optimistic about possible Cybertruck news.

As predicted by many, Musk announced that the oft-delayed truck will roll off the lot at the Texas facility no sooner than "next year."

Fans have been waiting for their pre-ordered Cybertruck since late 2019. The company has subsequently pushed back the brutalist pickup several times. Originally slated for late 2021, the release is now looking like late 2022.

The company's massive Semi truck and speedy Roadster are also scheduled to enter production next year — but we'll believe it when we see it.

Stonk Broke
Twitter Bots Love Tesla. Elon Musk Is Pledging to Destroy Them
May 3
Read More
Self-Driving Recall
Tesla Says It's Updating Self-Driving Cars to No Longer Break the Law
Feb 1
Read More
Freedumb
Elon Musk Goes on Paranoid Rant About Vaccines
Jan 28
Read More
+Social+Newsletter
TopicsAbout UsContact Us
Copyright ©, Camden Media Inc All Rights Reserved. See our User Agreement, Privacy Policy and Data Use Policy. The material on this site may not be reproduced, distributed, transmitted, cached or otherwise used, except with prior written permission of Futurism. Fonts by Typekit and Monotype.