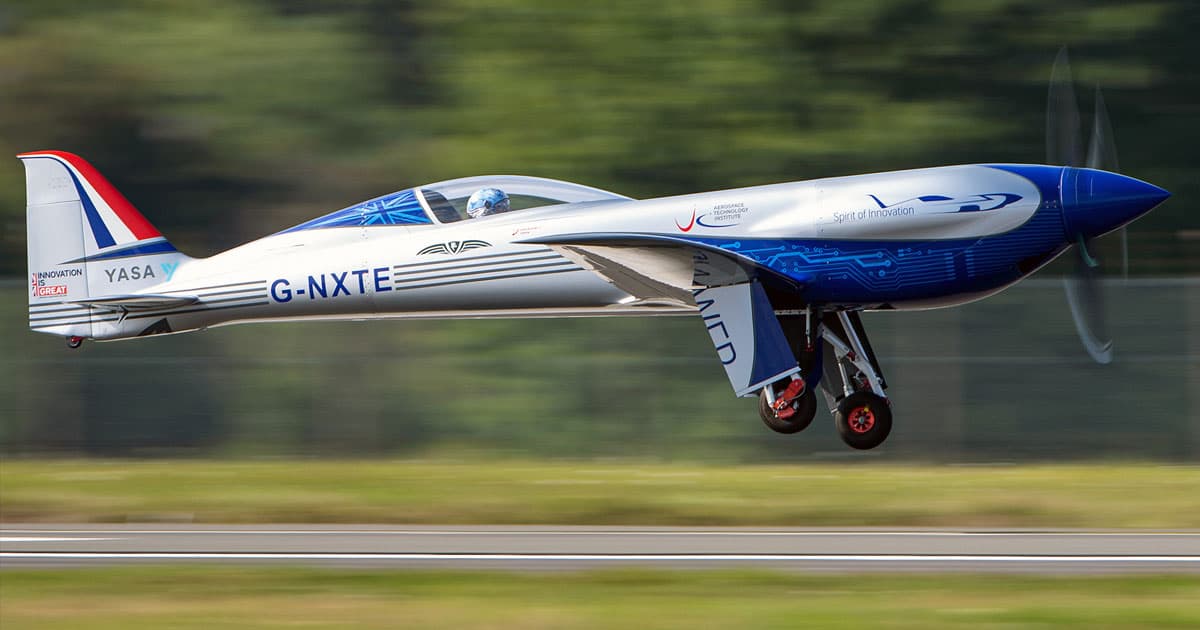 It smashed the current record by 132 mph.

It smashed the current record by 132 mph.

That's if the Fédération Aéronautique Internationale (FAI) approves the flight and certifies the record. If the record does get certified, the company's single-seater aircraft will have smashed the current record by an impressive 132 mph, which was set by Siemens' Extra 330LE eAircraft in 2017.

It also managed to climb juts shy of 10,000 feet in just 202 seconds, 60 seconds faster than the previous record holder, a testament to the sheer muscle power of electric propulsion.

The plane runs on a 400 kilowatt electric powertrain and features "the most power-dense propulsion battery pack ever assembled in aerospace," according to a statement.

The news comes after the Spirit of Innovation successfully completed its maiden voyage back in September, spending around 15 minutes in the air.

While electric airplanes aren't going to replace fuel-guzzling long-haul airliners any time soon — the energy to weight ratio makes it unfeasible with today's battery tech, according to Engadget — electric planes could conceivably start to take over shorter trips.

In Rolls Royce's press release, UK business secretary Kwasi Kwarteng said the aircraft "will show the potential of electric flight and help to unlock the technologies that could make it part of everyday life."

But airline executives aren't quite convinced.

Electric Flights Are Coming: Engineers Unveil a 150-Seat Battery-Powered Plane
3. 22. 17
Read More
Smart Vision
Startup Shows Off Working AR Contact Lens You Can Actually Wear
11:56 AM
Read More
Bottoms Up
Scientists Discover Giant Alcohol Molecule Near The Center of Our Galaxy
Yesterday
Read More
+Social+Newsletter
TopicsAbout UsContact Us
Copyright ©, Camden Media Inc All Rights Reserved. See our User Agreement, Privacy Policy and Data Use Policy. The material on this site may not be reproduced, distributed, transmitted, cached or otherwise used, except with prior written permission of Futurism. Fonts by Typekit and Monotype.