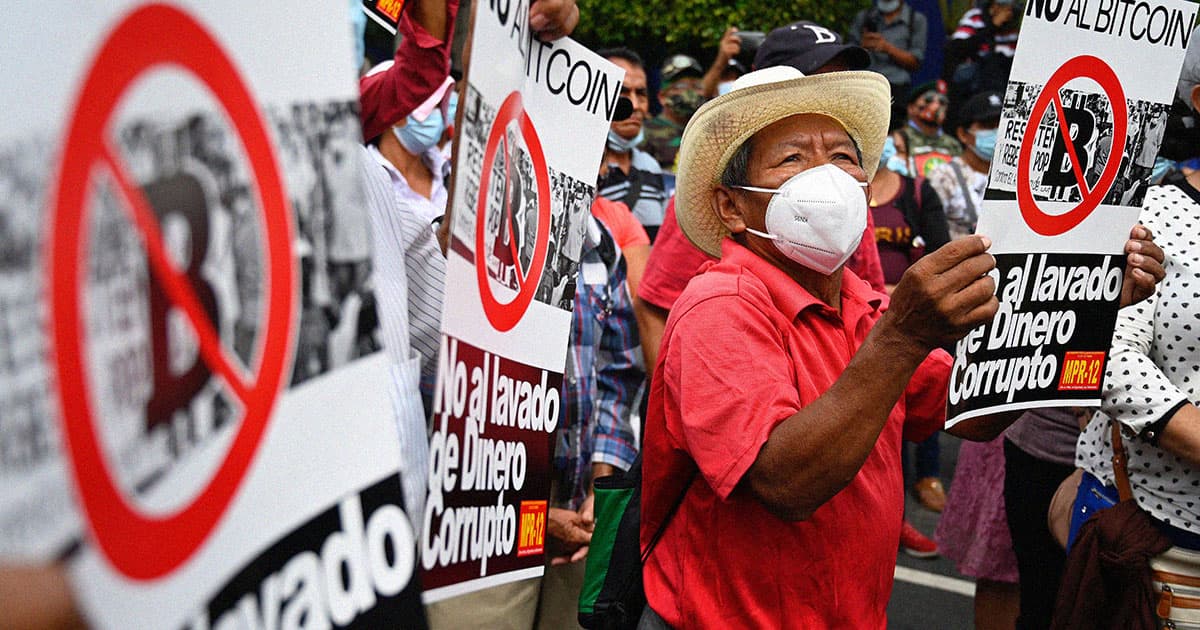 Where totalitarianism and Web3 inevitably meet in the middle.

Where totalitarianism and Web3 inevitably meet in the middle.

Six months ago, El Salvador made Bitcoin legal tender — requiring all businesses in the country to accept it. According to actual Salvadorans, it's been a disaster.

In interviews with global tech reporting nonprofit Rest of World, Salvadoreños of all stripes painted a vastly different picture of their country's Bitcoin rollout than the one portrayed by America's crypto boosters, who have hyped up the Central American country's forthcoming Bitcoin bond rollout.

Those interviewed described headache-inducing glitches that led them to abandon Bitcoin altogether. And it's happening all over, including the country's experimental "Bitcoin Beach" town, which crypto bros viewed as a harbinger of the future. But the worst of it doesn't even involve glitches using blockchain as much as it does straight-up totalitarianism. The most striking anecdote in the story came from Mario Gómez, a 30-something Salvadoran software developer who had ideological complaints about his country's arguably authoritarian government taking control of what was supposed to be a decentralized currency.

Like most people with complaints, the software developer posted lengthy Twitter threads on the subject soon after the country's bespoke crypto wallet, called Chivo, was announced. Just before it was launched, as Gómez told Rest of World, the police pulled him over, citing an alleged issue with his car. After taking him to two different stations and confiscating his phones, however, it began to look like the detainment was politically motivated. Soon after, the Salvadoran government announced it was investigating Gómez for financial fraud — and then dropped the case before pursuing it or even formally charging him.

TacuaZines we have to take care of each other.
I saw somewhere that "even if we don't know each other, we need each other" 💖🌿 pic.twitter.com/OqFvXwpULt

In the grand scheme of our current geopolitical moment, the concept of what some are calling Latin America's first millennial dictator repressing criticism of Bitcoin feels almost quaint. Indeed, authoritarianism has become almost synonymous with the region itself (a consequence of several American-backed coups during the last century).

But because El Salvador's President Nayib Bukele (who calls himself the country's "CEO" in his Twitter bio) has painted himself as the first Bitcoin leader and has romanced many American and European crypto enthusiasts into believing that he's the future of sociopolitics, this story has morphed into something far more technological — and much more insidious — than the average tale of dictatorial corruption.

It also poses the obvious question: if a dictator can't force Bitcoin into being legitimate tender, who can?

More on El Salvador's Bitcoin gamble: An Entire Country Switched to Bitcoin and Now Its Economy Is Floundering

Sad!
Donald Trump's NFT Collection Is So Fantastically Ugly That Even His Biggest Fans Are Aghast
12. 16. 22
Read More
Tulip Fever
Dutch Startup Mining Bitcoin to Grow Tulips, and We Can't Tell If They're Joking
12. 12. 22
Read More
Rug Pull
CNN In Hot Water With Investors After Canceling Its Weird NFT Project
10. 12. 22
Read More
+Social+Newsletter
TopicsAbout UsContact Us
Copyright ©, Camden Media Inc All Rights Reserved. See our User Agreement, Privacy Policy and Data Use Policy. The material on this site may not be reproduced, distributed, transmitted, cached or otherwise used, except with prior written permission of Futurism. Articles may contain affiliate links which enable us to share in the revenue of any purchases made.
Fonts by Typekit and Monotype.