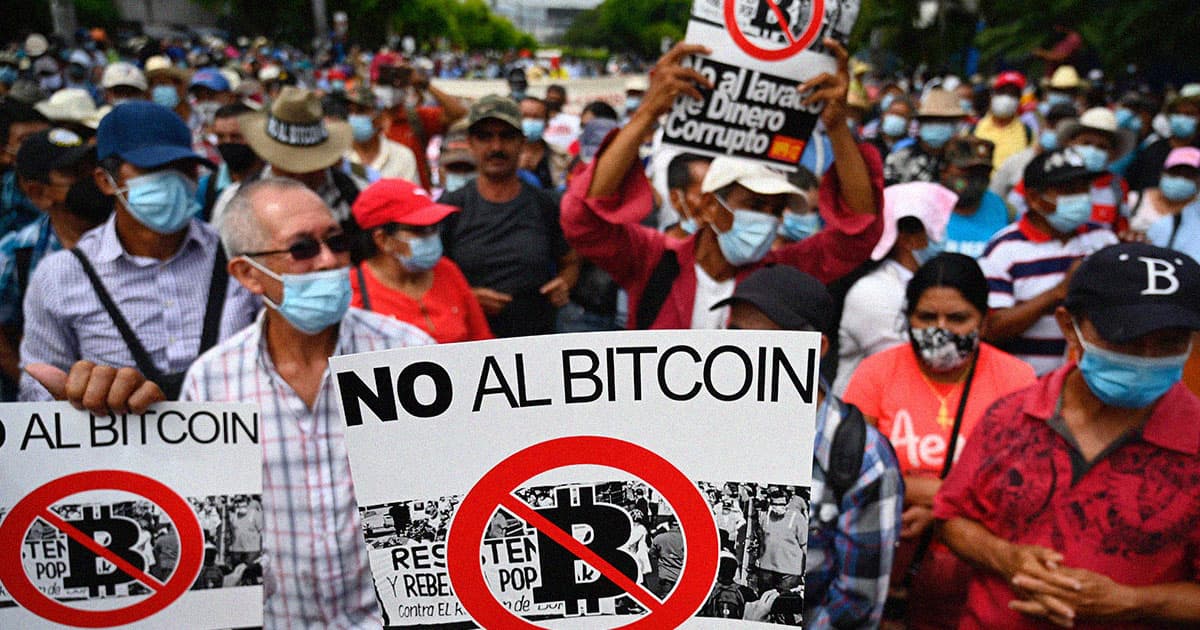 Months after El Salvador announced that it would accept bitcoin as legal tender, the country has found itself on the verge of economic collapse yet again.

The country’s president Nayib Bukele made waves last year when he announced that the nation would accept the token for use at stores and banks. The self-described “CEO of El Salvador” even announced plans to build a “Bitcoin City“ to turn the country into “the financial center of the world.”

However, it turns out that forcing your nation’s banks and stores to accept a currency large swaths of the population are unfamiliar with and don’t trust is a good way to tank your economy, according to a castigating report by Fortune.

El Salvador has found itself in an ever-deepening sinkhole of debt, with its cringe president lobbying the International Monetary Fund for a $1.3 billion loan, according to the magazine, and shortly after the Bitcoin City announcement in November, the country’s sovereign bond dropped from 75 cents to 63 cents overnight and is now at 36 cents.

In the past five months since it officially adopted bitcoin as legal tender, experts have estimated that El Salvador’s sovereign credit got four times worse than it was before the move. Bitcoin’s extreme volatility has also been on full display, as its price was hovering around $60,000 at the time of Bukele’s big announcements, but has now crashed to the mid-$40,000s.

“El Salvador now has the most distressed sovereign debt in the world, and it’s because of the Bitcoin folly,” Steve Hanke, professor of applied economics at Johns Hopkins University, told Fortune. “The markets think that Bukele’s gone mad, and he has.”

There are many reasons for this, including the fact that El Salvador already wasn’t doing so hot financially before their big bet on bitcoin. However, a look under the hood revealed that many Salvadorans simply didn’t trust the token leading to limited use of the token.

A Central American University survey conducted last September found that nine out of 10 citizens in the country didn’t know what bitcoin was, and eight out of 10 said they had little to no confidence in the digital cash.

Bukele also sold the legislation on the idea that bitcoin would make remittances — money sent to Salvadorans from friends and family members working abroad — cheaper. However, the opposite was often true.

This is because citizens would typically turn the bitcoin into cash after receiving it, Fortune reports. To do that, they needed to travel to an ATM, which takes a substantial cut of the money withdrawn. Exchange platforms like Coinbase also take anywhere from two to four percent of the money as well.

Hanke believes that that winds up being nearly four times as expensive as traditional remittances.

So yeah, turns out voting in a cringe crypto bro as president might not be the best thing for your country. While there’s certainly some promise to the idea of accepting bitcoin as legal tender, public trust needs to get there first — and we wouldn’t bet on that happening any time soon.

READ MORE: El Salvador’s plan to create the first Bitcoin-powered nation is tanking the economy—and is a mess by every measure [Fortune]

Read This Next
Regulating Crypto
Hillary Clinton Calls Out Crypto Exchanges for Letting Russia Bypass Sanctions
Bye Bye Baby
Lawyer for Crypto Laundering Rapper Says She Won’t Flee Because of Her Frozen Embryos
Bitcoin & Clyde
Feds Arrest Crypto CEO for Bitcoin Laundering, But Her Real Crime Was Against Rap Music
Bitcoin Disease
Ex-Crypto Backer: Bitcoin Is a “Contagious Disease” and It’s About to Get Nasty
Crypto Courts
Crypto Startup Lets You Fund Other People’s Lawsuits Against Each Other
More on Future Society
Thanks Man!
Yesterday on futurism
After Sexual Allegations, Elon Musk Jets Off to Brazil
Notaverse
Yesterday on futurism
In Extremely Confusing Twist, Facebook Says It Isn’t Building a Metaverse After All
Smile!
Yesterday on futurism
Experts Alarmed by Zoom’s Tech for Detecting Users’ Emotions
READ MORE STORIES ABOUT / Future Society
Keep up.
Subscribe to our daily newsletter to keep in touch with the subjects shaping our future.
+Social+Newsletter
TopicsAbout UsContact Us
Copyright ©, Camden Media Inc All Rights Reserved. See our User Agreement, Privacy Policy and Data Use Policy. The material on this site may not be reproduced, distributed, transmitted, cached or otherwise used, except with prior written permission of Futurism. Fonts by Typekit and Monotype.