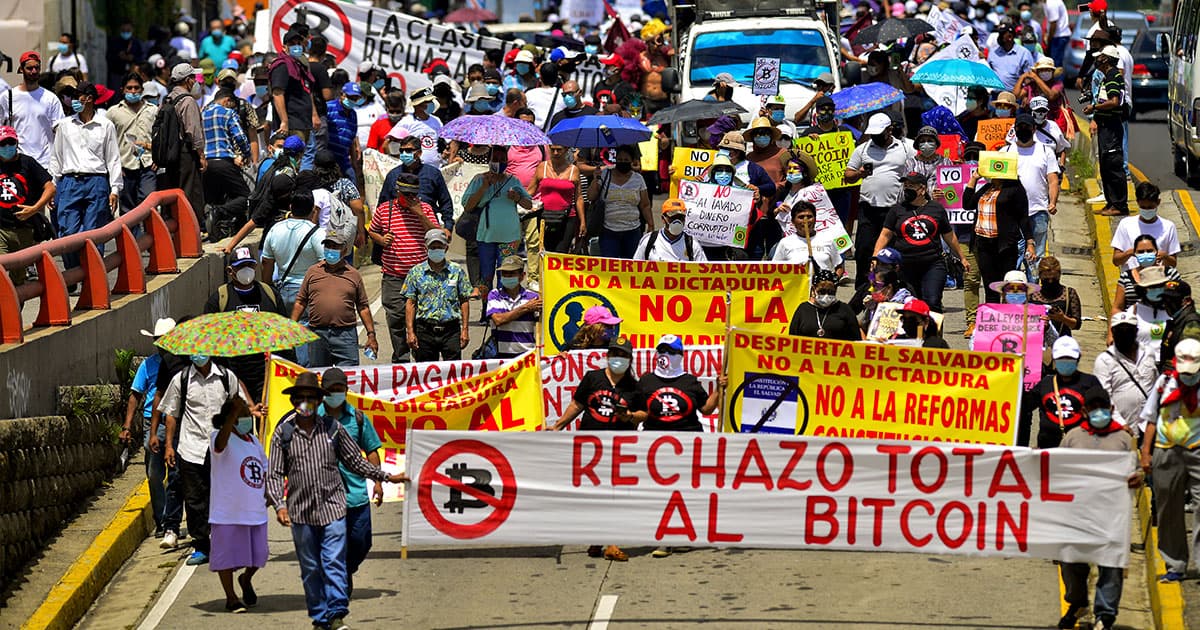 Shots have been FIRED.

Shots have been FIRED.

It's been about a year since El Salvador's President Nayib Bukele, Crypto Bro and self-described "world's coolest dictator," moved to incorporate Bitcoin as an official state currency. Spoiler alert: it hasn't exactly gone well. In fact, in the words of Canberra University economist John Hawkins, the grand crypto experiment has been nothing short of a "spectacular failure."

"Now, a year on, there's more than enough evidence to conclude Bukele had no idea what he was doing," Hawkins wrote in a recent column for The Conversation.

Bukele's Bitcoin experiment was centered around an idealized "Bitcoin City," funded through an imagined $1 billion government bond program. The country was to invest half of that billion into the city itself, and the other half would go towards Bitcoin investments. Those Bitcoin buy-ups, according to the president, would ultimately lead to economic growth.

Sadly, that promised economic boom is yet to materialize.

In fact, as Hawkins explains, that bond program has yet to be implemented at all. Bukele, meanwhile, has poured roughly $100 million into Bitcoin, which is only worth about half that investment right now. Elsewhere, gang violence has exploded, and the nation has fallen into confused economic turmoil.

Of course, the wildly catastrophic Bitcoin crash didn't lend itself to Bukele's crypto-forward efforts. At the same time, however, Bukele himself has also failed to inspire much faith in his own economic prowess.

"Bukele's misunderstanding of Bitcoin — and economics more generally — has been demonstrated repeatedly," Hawkins continued, recalling instances when the president failed to show a solid understanding of how GDP works, or took to Twitter to share over-hyped, low-substance crypto evangelism.

Hawkins isn't the president's only detractor. The International Monetary Fund (IMF) has begged the El Salvadorian leader to pare back his crypto-forward legislation, arguing that the digital assets are still too volatile and unsafe for national use (Bukele fired back with IMF-bashing memes on Twitter).

There's no doubt that there's been some serious damage done to the Cryptbro in Chief's reputation. But that's not what's most important here: this has been an experiment, and a fairly careless one at that, that's been performed live on actual El Salvadorians. Should it continue its implosion, it'll be the El Salvadorian people who bear the real cost of that failure.

READ MORE: One year on, El Salvador's Bitcoin experiment has proven a spectacular failure [The Conversation]

More on El Salvadorian crypto hell: An Entire Country Switched to Bitcoin and Now Its Economy Is Floundering