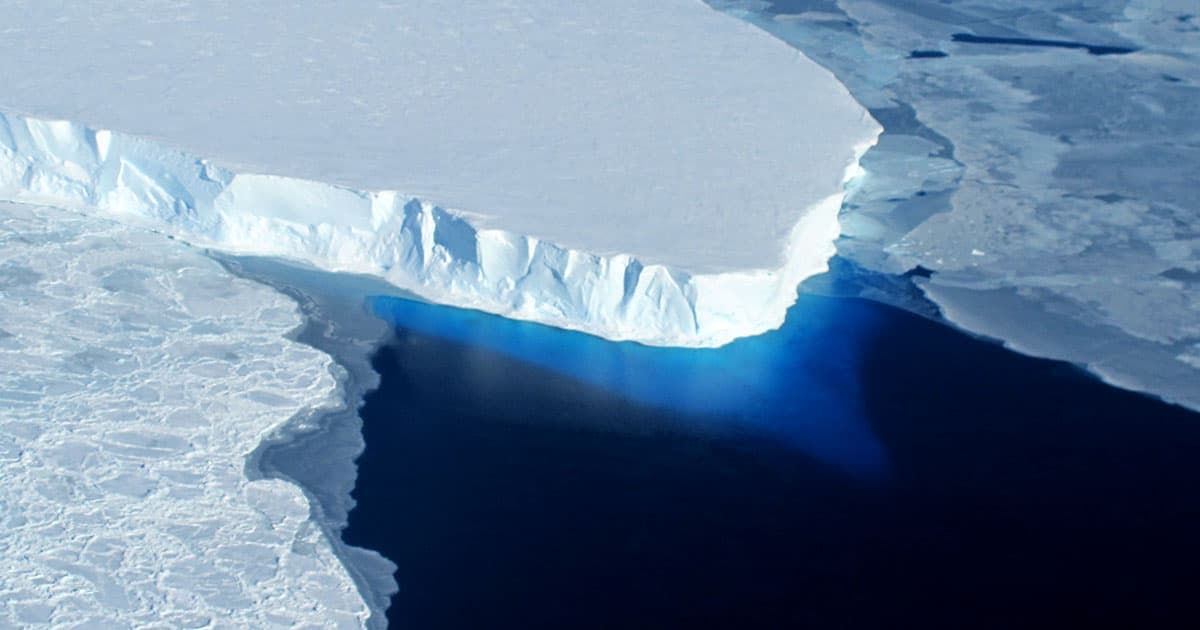 "It could fall apart quickly, in decades."

"It could fall apart quickly, in decades."

A new interview with researcher David Holland, an atmospheric scientist at New York University, reveals just how quickly the Thwaites Glacier is melting. Nicknamed the "Doomsday Glacier," Axios reported this morning that the West Antarctica ice shelf could melt in as quickly as a few decades, unleashing the inland ice it holds back into the ocean and raising sea levels by several catastrophic feet.

"It could fall apart quickly, in decades, or it could be centuries," Holland told the pub. "And the only way to really know that is through this research."

Holland is currently aboard an icebreaker ship navigating thick sea ice where he hopes to study the Thwaites' grounding line, which is where the ice meets the seafloor. Temperatures and salinity levels will tell scientists how quickly the iceberg is melting, and if it's melting from underneath as well.

In 2014, NASA reported that Western Antarctic sea ice loss was "inevitable." In 2021, researchers found the iceberg was even more unstable than previously thought. Now Holland's team is trying to find out just how long we have.

Just as the Thwaites may unleash inland ice into the ocean — much like a cork pulled from a bottle — others are dumping concerning amounts of fresh water near penguin populations. According to a new study published by researchers at Cambridge and the University of Leeds, iceberg A-68a was the world's largest before it shattered into nearly a dozen mini-bergs.

The busted-up A-68a flushed about 162 billion tons of fresh water into the ocean near the penguin habitat, which could effect temperature, environment and marine life in unexpected and deadly ways.

"Icebergs impact the physical and biological properties of the ocean where they drift, depending on the degree of melting," the study's authors wrote. "Our results could also help to model the disintegration of other large tabular icebergs."

With two doomed-iceberg stories in a single day, it's hard not to see how urgent climate reform is. Save the penguins, and save ourselves.

Sun Shield
Scientists Increasingly Calling to Dim the Sun
11. 23. 22
Read More
Tornado Watch
Tornadoes Like Kentucky's May Be Getting Stronger Due to Climate Change, Scientists Say
12. 12. 21
Read More
Run AMOC
Scientists Warn Gulf Stream May Collapse, Freezing North America
8. 5. 21
Read More
+Social+Newsletter
TopicsAbout UsContact Us
Copyright ©, Camden Media Inc All Rights Reserved. See our User Agreement, Privacy Policy and Data Use Policy. The material on this site may not be reproduced, distributed, transmitted, cached or otherwise used, except with prior written permission of Futurism. Articles may contain affiliate links which enable us to share in the revenue of any purchases made.
Fonts by Typekit and Monotype.