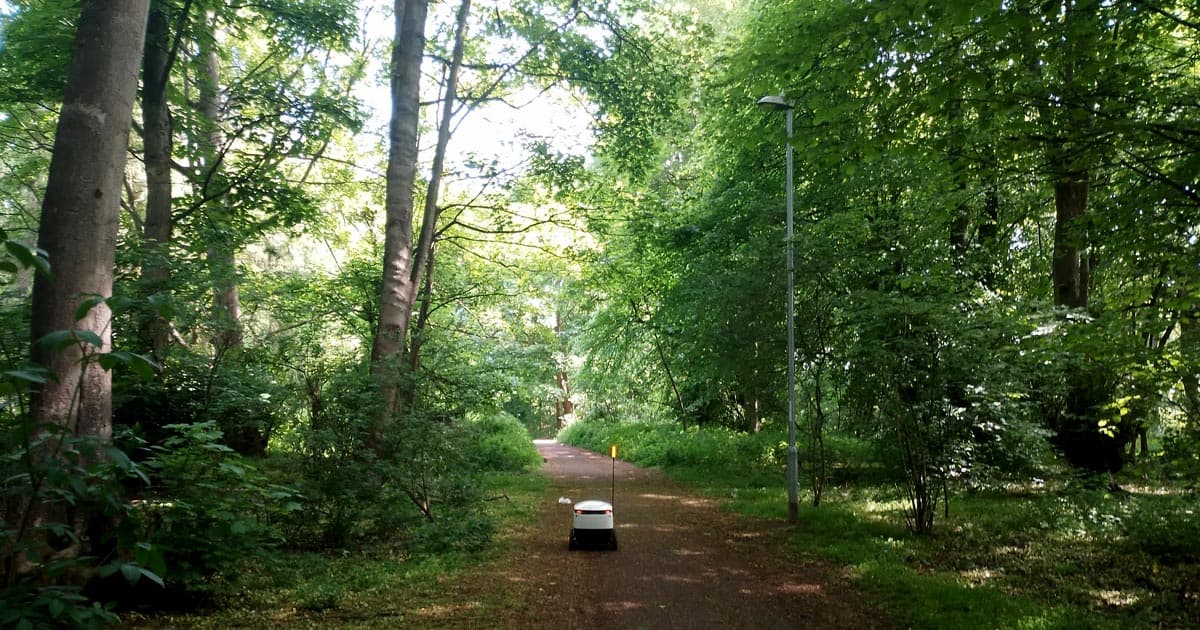 Sad Delivery Robot Gets Lost In The Woods

If a delivery robot gets lost in the woods and nobody's there to find it, does it, uh, okay, we kinda lost the metaphor on that one.

Regardless, the internet was delighted over the weekend when British history professor Matthew McCormack made a hilarious discovery during his morning bike ride: a six-wheeled delivery robot, driving by its lonesome self along a forested path, in a rather adorable reminder of the helplessness of increasingly ubiquitous autonomous machines.

It's unclear what company it belonged to. But given the location, Northampton in the UK, the robot was likely built by Starship Technologies, a well-established player in the field that has expanded its footprint considerably in the area.

On my bike ride this morning, saw a delivery robot lost in the woods pic.twitter.com/ygiH4Gyrl3

This poor little bot is far from the first to run into trouble.

Some of been getting stuck on curbs, while another met a fiery demise underneath freight trains.

In another domain, robot vacuums have also run astray. One infamous vacuum narrowly escaped a Travelodge hotel in Cambridge, UK, back in January. Another one got so lost that its owner distributed "missing" posters.

There's a good chance that lost delivery robots will become a common sight in the near future. The use of the tech skyrocketed during the COVID-19 pandemic, providing cities, particularly in China, with ways to make deliveries without spreading germs.

Starship raised $100 million in March alone, signaling a major appetite among investors for the microwave-sized robots.

So it may be time to learn how to get along with the chaotic wheelie bins — or at least figure out how to point them in the right direction if they do end up getting lost in the woods.

More on delivery robots: Alibaba Says Delivery Robots Are Great Because They Don’t Smoke on the Job

Roll Out
Lawmakers Don't Know How to Regulate Amazon's Delivery Robots
1. 29. 19
Read More
San Francisco Approves Tight Regulations on Delivery Robots
12. 8. 17
Read More
Gifts For Mom
Jeff Bezos Ditches Plan to Land Rockets on Ship Named for His Mom
5:53 PM
Read More
+Social+Newsletter
TopicsAbout UsContact Us
Copyright ©, Camden Media Inc All Rights Reserved. See our User Agreement, Privacy Policy and Data Use Policy. The material on this site may not be reproduced, distributed, transmitted, cached or otherwise used, except with prior written permission of Futurism. Fonts by Typekit and Monotype.