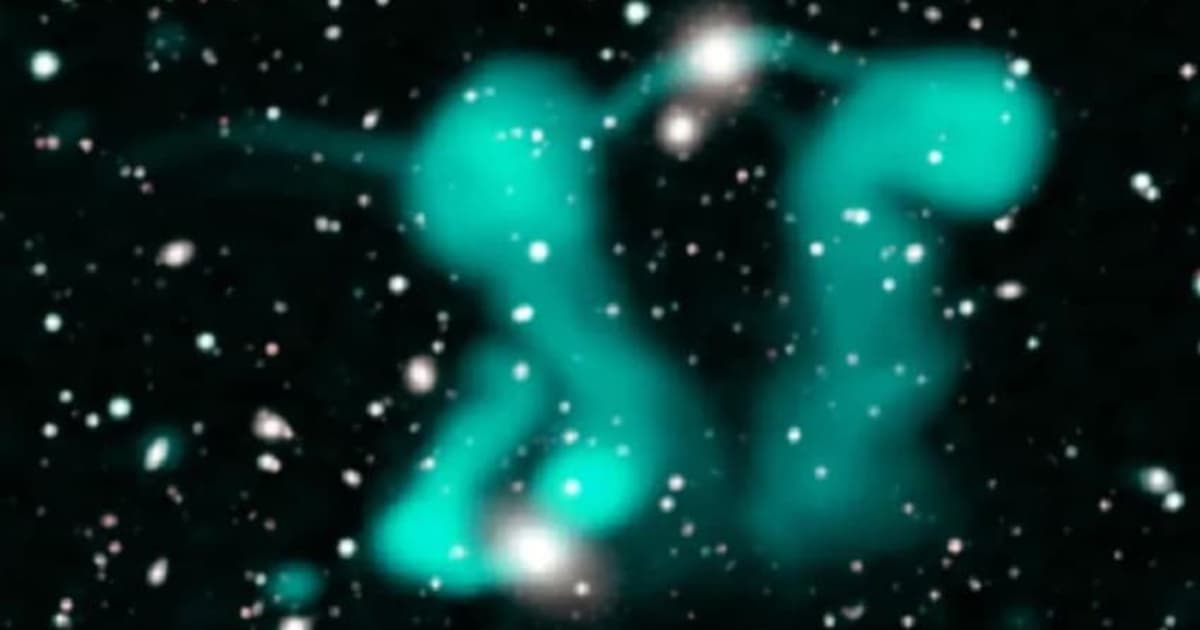 Who You Gonna Call?

Australian astronomers have discovered a cloud of electrons floating in space that appears to look like two ghosts dancing in the cosmos.

Ray Norris, astronomer and professor at the School of Science at Western Sydney University, published an article in Cosmos Magazine explaining how his team discovered two radio galaxies with supermassive black holes in the center of each one. The black holes shoot out "jets of electrons that are bent into grotesque shapes by an intergalactic wind" resulting in the ethereal spectacle, according to the article.

Don’t just take our word for it though. See for yourself below:

The dancing ghosts are located roughly a billion light-years away from Earth. It was discovered as a part of the Evolutionary Map of the Universe (EMU) project. The goal of the project is to study and conduct a census of roughly 70 million radio sources throughout the Universe.

To accomplish this, the EMU project is using the new Australian Square Kilometre Array Pathfinder (ASKAP). This radio telescope allows astronomers to look "deeper into the Universe than any other," according to Norris.

"When you boldly go where no telescope has gone before, you are likely to make new discoveries," he said.

The dancing ghosts weren’t the only surprising find from the EMU project so far. The team has also discovered a series of mysterious radio emissions spanning a million light years across galaxies.

Dubbed the "Odd Radio Circles," the phenomenon is still a mystery to researchers — though they are working "furiously" to discover their origins, according to Norris.

The EMU project is still underway. So, rest assured, more fascinating — and haunting — finds are in store for astronomers in the future.

More on astronomy: In a Bizarre Twist, Astronomers Detect Light Coming from Behind Black Hole

Black Hole Snapshot
Scientists Release Image of Black Hole at Center of Our Galaxy
5. 12. 22
Read More
The Last Strand
Scientists Puzzled by Weird "Strands" at the Center of Our Galaxy
1. 26. 22
Read More
Smol Black Holes
Scientists Discover New Class of Tiny Black Holes
10. 31. 19
Read More
+Social+Newsletter
TopicsAbout UsContact Us
Copyright ©, Camden Media Inc All Rights Reserved. See our User Agreement, Privacy Policy and Data Use Policy. The material on this site may not be reproduced, distributed, transmitted, cached or otherwise used, except with prior written permission of Futurism. Articles may contain affiliate links which enable us to share in the revenue of any purchases made.
Fonts by Typekit and Monotype.