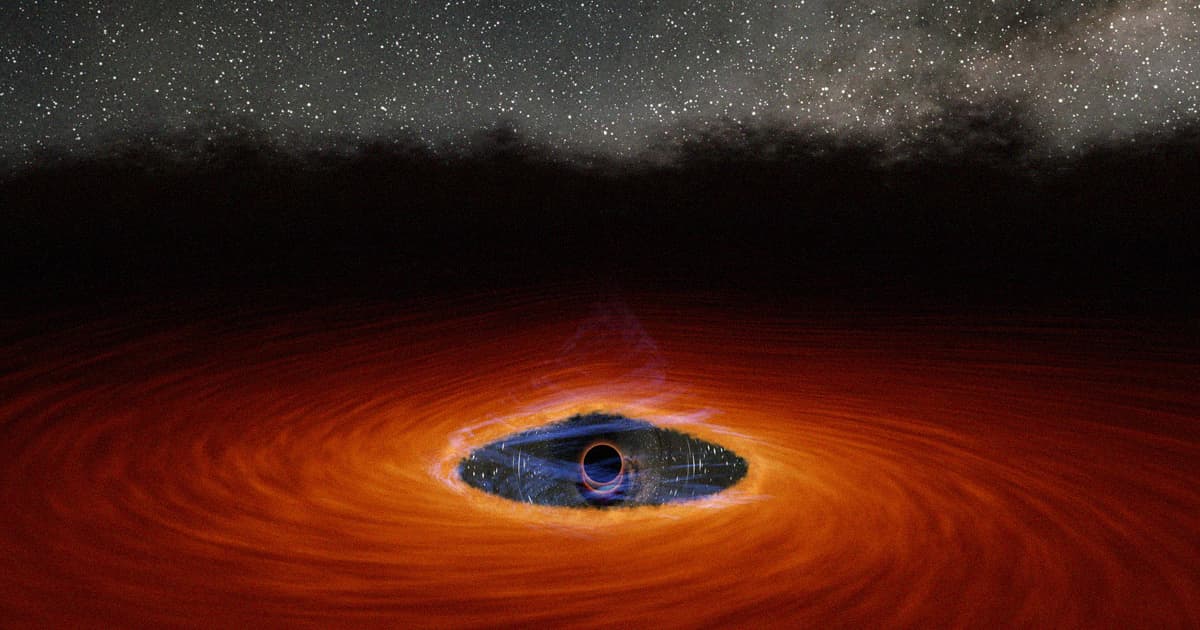 In a Bizarre Twist, Astronomers Detect Light Coming From Behind Black Hole

A team of scientists detected a series of bright flares of X-ray light coming from one of the least expected places: behind a supermassive black hole.

"Any light that goes into that black hole doesn't come out, so we shouldn't be able to see anything that's behind the black hole," said Stanford University astrophysicist Dan Wilkins, lead author of a paper about the research published today in Nature Communications, in a statement.

An unusual characteristic of black holes made the discovery possible.

"The reason we can see that is because that black hole is warping space, bending light and twisting magnetic fields around itself," Wilkins said.

Einstein's theory of general relativity has always predicted this, but the bending of light around a black hole has never been confirmed — until now, a testament to the recent advancements in technology that allowed this unprecedented look at our cosmos.

It was an exciting moment in the history of astronomy.

"Fifty years ago, when astrophysicists starting speculating about how the magnetic field might behave close to a black hole, they had no idea that one day we might have the techniques to observe this directly and see Einstein's general theory of relativity in action," said Roger Blandford, co-author and professor of physics at Stanford, in the statement.

The team was studying coronas, the swirling halos of superheated gas that surround certain black holes. Once these gases get caught up in the magnetic field of the black hole, they produce X-rays, which we can observe from Earth.

We still don't fully understand the coronas swirling around many black holes in our universe, but the European Space Agency's upcoming Wide Field Imager detector could get us much higher resolution observations in the future.

READ MORE: First detection of light from behind a black hole [Stanford University]

Black Hole Snapshot
Scientists Release Image of Black Hole at Center of Our Galaxy
May 12
Read More
Sucking Atmospheres
Scientists Spot Ravenous "Vampire" Star Devouring Its Neighbor
Mar 2
Read More
The Last Strand
Scientists Puzzled by Weird "Strands" at the Center of Our Galaxy
Jan 26
Read More
+Social+Newsletter
TopicsAbout UsContact Us
Copyright ©, Camden Media Inc All Rights Reserved. See our User Agreement, Privacy Policy and Data Use Policy. The material on this site may not be reproduced, distributed, transmitted, cached or otherwise used, except with prior written permission of Futurism. Fonts by Typekit and Monotype.