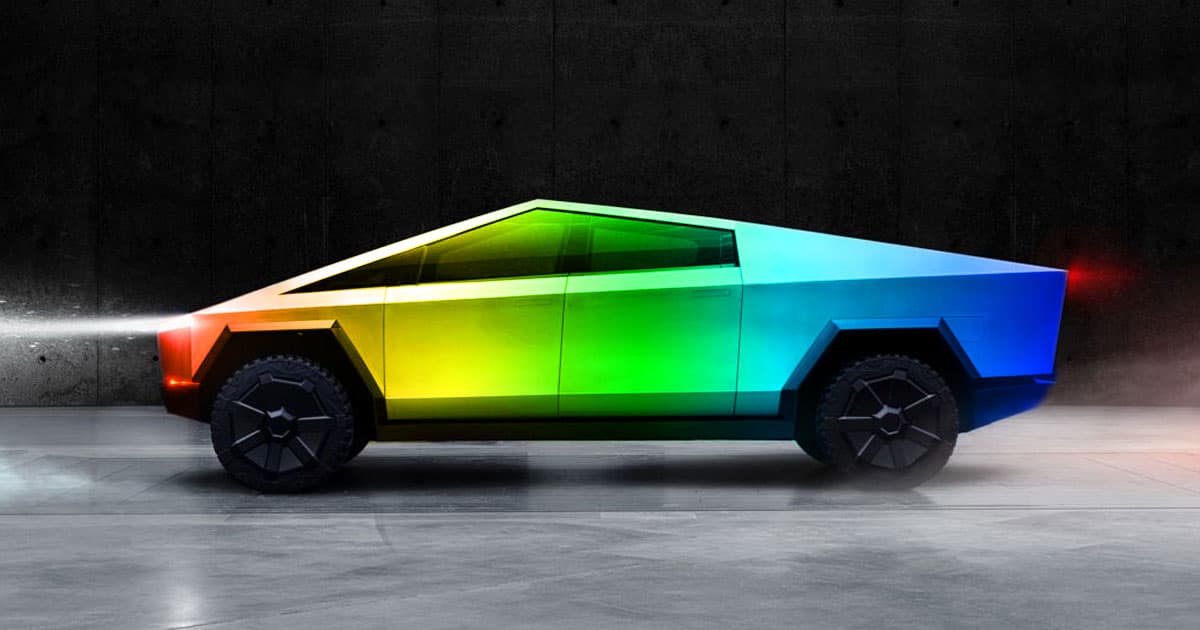 Cybertruck Metal Can Be Etched, Heated Into a Rainbow

Last week, Tesla announced that the Elon Musk-run electric car company will be opening a US factory in Austin, Texas, to build the long-awaited Cybertruck.

Musk isn't losing any time exploring some ways to make it look, well, just a little less like a giant stainless steel box on wheels.

In a series of tweet replies, very much in character for the CEO, Musk offered a hint of what the fortified, apocalypse-proof truck could end up looking like from the outside: pure white, or even a rainbow treatment, as Electrek reports.

Design student and Twitter user @flcnhvy suggested that "some types of steel change color when tempered," and that a Cybertruck "could be torched using a not-a-flamethrower," referring to The Boring Company's controversial, propane-burning flamethrower. Being a man of a few words, Musk appeared to support the idea, replying with a cursory "yes."

Stainless steel does change color depending on what temperature it's subjected to, ranging from grey, sand, brown, and purple, to blue and light blue. Heated just the right way, an otherwise monotone, stainless steel-clad Cybertruck could be turned into something far more cheerful looking.

In response to a video of a piece of stainless steel being laser-etched with a fun pattern, Musk replied with "cool." A render of an off-roader Cybertruck with a "white oxide" coating also got a reply out of Musk — such an option would be "not impossible."

Whether Tesla will produce these color treatments in-house is debatable. A rainbow treatment will likely be an option relegated to the aftermarket, Electrek suggested.

More on the Cybertruck: Elon Musk: “We Want to Be a Leader in Apocalypse Technology”