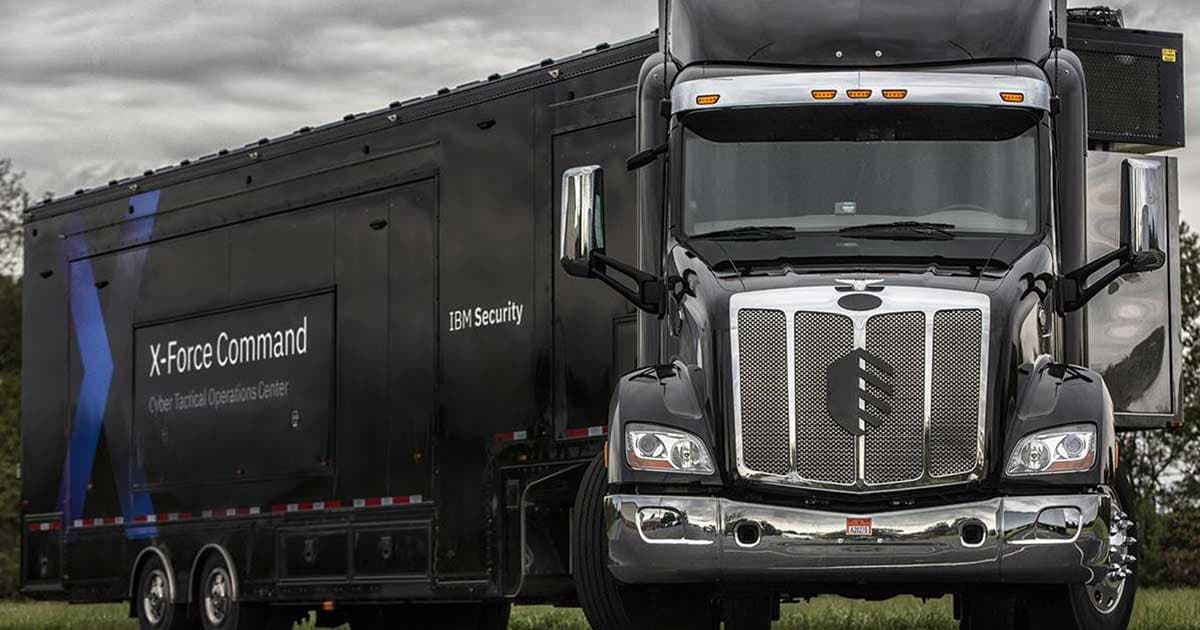 It looks like something from "Ghost in the Shell."

It looks like something from "Ghost in the Shell."

The exterior is sleek and menacing, all black paint and chrome. The inside is awash with computer screens, like the set of a '90s hacker movie.

The semi truck isn't a leftover prop from the "Ghost in the Shell" remake. It's IBM's X-Force Command Cyber Tactical Operations Center, which has the tough-sounding acronym C-TOC — and, according to the computer giant, and it could be corporations' best line of defense against cyber attacks.

The idea is that the cyberpunk vehicle will serve as a control center for a SWAT-like team of white-hat hackers, transporting these experts to corporate clients on the receiving ends of cybersecurity disasters.

According to an IBM press release, the truck features a data center, satellite and cell communications, self-sustaining power, and two dozen "operators, analysts, and incident command center staff." It's modeled after the mobile command centers used by the military and first responders.

IBM claims it can use the vehicle to respond to incidents or to provide extra cybersecurity support during major events. But the vehicle's main purpose will be training clients to deal with the types of hacks they're likely to encounter. On Thursday, C-TOC will visit the National Mall in Washington, DC, where its entourage will consult with congressional staff and other government workers about online threats.

“Experiencing a major cyberattack is one of the worst crisis a company can face,” Caleb Barlow, IBM vice president of threat intelligence, said in the press release, “and the leadership, skills, and coordination required is not something you want to test out for the first time when you’re facing a real attack.”

More on cybersecurity: Cyber Warfare Is Growing. We Need Rules to Protect Ourselves.

Brands We Love
What Do a Toy Store and a Tech Accelerator Have in Common? Cloud-Based Tech.
7. 3. 19
Read More
Excerpt: Three Key Takeaways From Your Clouds Can 2019
7. 1. 19
Read More
Brands We Love
Shake Hands With Innovators, Get Answers About Cloud and Data-Driven Tech
5. 28. 19
Read More
+Social+Newsletter
TopicsAbout UsContact Us
Copyright ©, Camden Media Inc All Rights Reserved. See our User Agreement, Privacy Policy and Data Use Policy. The material on this site may not be reproduced, distributed, transmitted, cached or otherwise used, except with prior written permission of Futurism. Articles may contain affiliate links which enable us to share in the revenue of any purchases made.
Fonts by Typekit and Monotype.