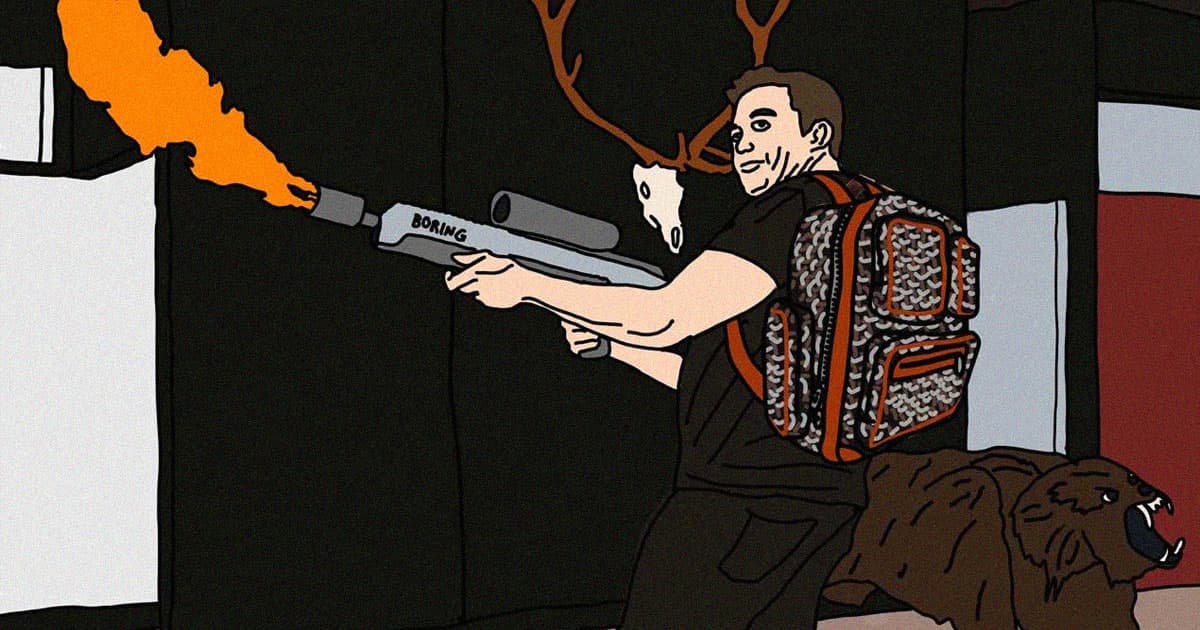 Crypto Project Named After Elon Musk, But Not Associated With Him, Buys Kanye West's Backpack

Here's some Futurism word soup for ya: Kanye West's famous, one-of-a-kind "Robot Face" backpack was just purchased for 50 ETH — roughly $100,000 at the time of purchase — by an Elon Musk-inspired, though not actually Elon Musk affiliated, NFT collective called Elon.Space.

Following so far? Us neither. Here's how the project described itself to Hypebeast.

"Elon's culture of memes is the reason why he is the most accessible figure in the Web3 and NFT space. He loves DOGE, he's going to space, and he loves trolling," the project told the site, explaining the inspiration behind its name. "His personality is the quintessential Web3 billionaire."

According to Hypebeast, the collective will now mint the backpack into an NFT. And in true Elon fashion, 420 lucky users who get their hands on the digital asset will be entered into a raffle to win the real thing.

Elon.Space, which boasts the motto "who controls the memes, controls the universe," is a relatively new project that, as it told Hypebeast, claims to focus on "phygital" goods — in other words, the blending of physical goods or experiences with those in the real world.

"Supporters can expect to be surprised and delighted with unfiltered commentary, high quality products (both physical and digital), and a chance to be part of a curated group of 420 who actually 'get it,'" the collective told the fashion outlet. "We don't believe in roadmaps and/or the standard mechanism by which today's NFT projects have incubated themselves into the industry."

And, well, sure, there are already some issues with that "standard mechanism" that Elon.Space speaks of. And the fact that the group chose a Kanye bag as their first project? Considering Kanye's past two cents about NFTs, it may first strike as a strange choice. But then again, this collective clearly centers memes and virality over all — and to that point, Kanye, for better and worse, certainly knows how to make waves online.

"Kanye is a creative genius that pairs perfectly with the ethos of Elon.Space," the project told Hypebeast. "We wanted a product that felt iconic and of a moment that resonates with the project – this was it."

More on rappers and blockchain: Eminem and Snoop Dogg Make Music Video Where They Appear as Their Bored Apes

Anonymous Allegations
Anonymous Declares War on Bored Ape Yacht Club Over Alleged Nazi Symbolism
Sep 28
Read More
Human Furniture
Crypto Guy: Desperately Poor People Could Be NPCs in Video Games
Sep 7
Read More
Estate Sale
David Bowie's Estate Pulls Down NFT Announcement After Backlash
Sep 6
Read More
+Social+Newsletter
TopicsAbout UsContact Us
Copyright ©, Camden Media Inc All Rights Reserved. See our User Agreement, Privacy Policy and Data Use Policy. The material on this site may not be reproduced, distributed, transmitted, cached or otherwise used, except with prior written permission of Futurism. Articles may contain affiliate links which enable us to share in the revenue of any purchases made.
Fonts by Typekit and Monotype.