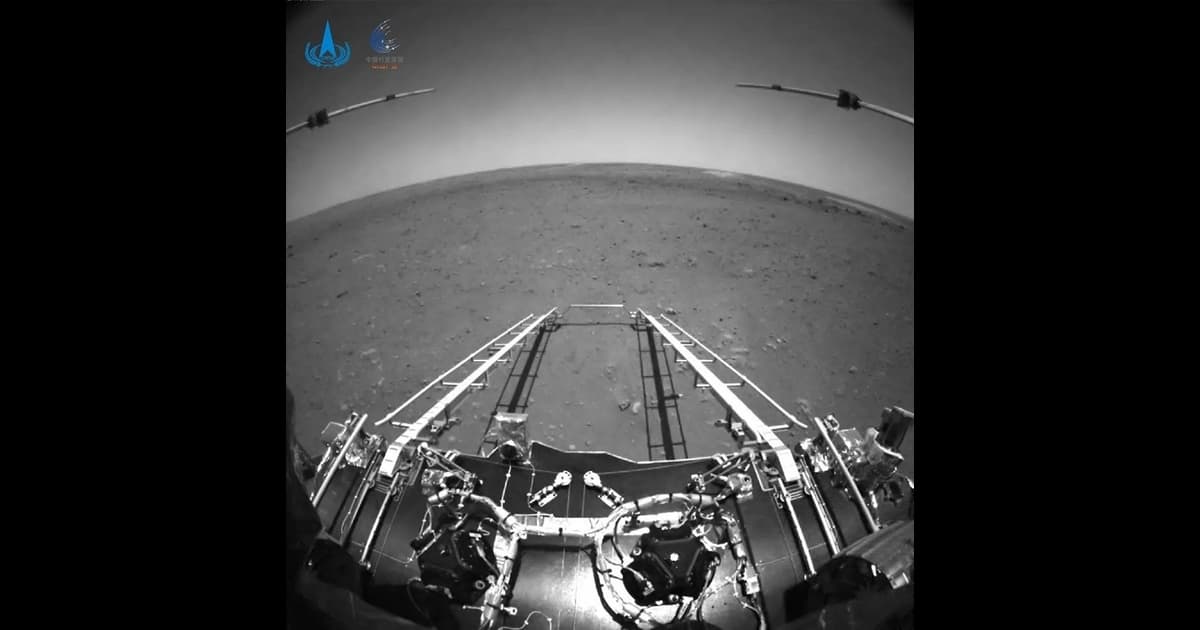 Here’s what the rover sounds like on the martian surface.

Here’s what the rover sounds like on the martian surface.

China's Mars rover has beamed back its first video and audio from the Red Planet's Utopia Planitia region.

The Chinese rover Zhurong sent footage of its descent — which included deployment of its supersonic disk-gap-band parachute — along with a video of its drive off of the Tianwen-1 landing platform on Sunday, according to Space.com. The latter video included sounds captured by the rover's climate station, which has a microphone to be used to capture the sounds of martian wind.

Here’s the video of its parachute deployment and descent:

And here’s the video (with sound) of Zhurong driving off of the lander:

Here's the deployment of Zhurong from the landing platform, but this time with SOUND pic.twitter.com/gKES48hT6a

The sound you hear in the second video might seem like a massive alien tripod emerging from the ground in order to vaporize Tom Cruise's neighborhood, but it's actually the metal-on-metal noise of the rover rotating.

"In fact the sounds were made when the pinion of the Mars rover rotates on the rack, or say the clashing sounds between metals," said Jia Yang, the Tianwen-1 lander deputy chief designer with the China National Space Administration, in a video released by Beijing.

Percy Got There First

Though the video and audio captured by the Chinese rover is no doubt momentous, Zhurong isn't the first to send back similar recordings of the martian surface.

NASA's own Perseverance rover beamed back video along with the first ever audio recordings of the Red Planet after it landed in February. You can take a listen to that below:

Now that you’ve seen Mars, hear it. Grab some headphones and listen to the first sounds captured by one of my microphones. 🎧https://t.co/JswvAWC2IP#CountdownToMars

In any case, it's amazing that nations are stepping up their space exploration efforts in such a big way. The more footage and data we can gather from Mars means we get that much closer to being able to get humans to land on it, and — eventually — to colonizing the planet.

More on Zhurong: Check Out This Huge Hole that China’s Mars Rover Blasted into the Ground While Landing