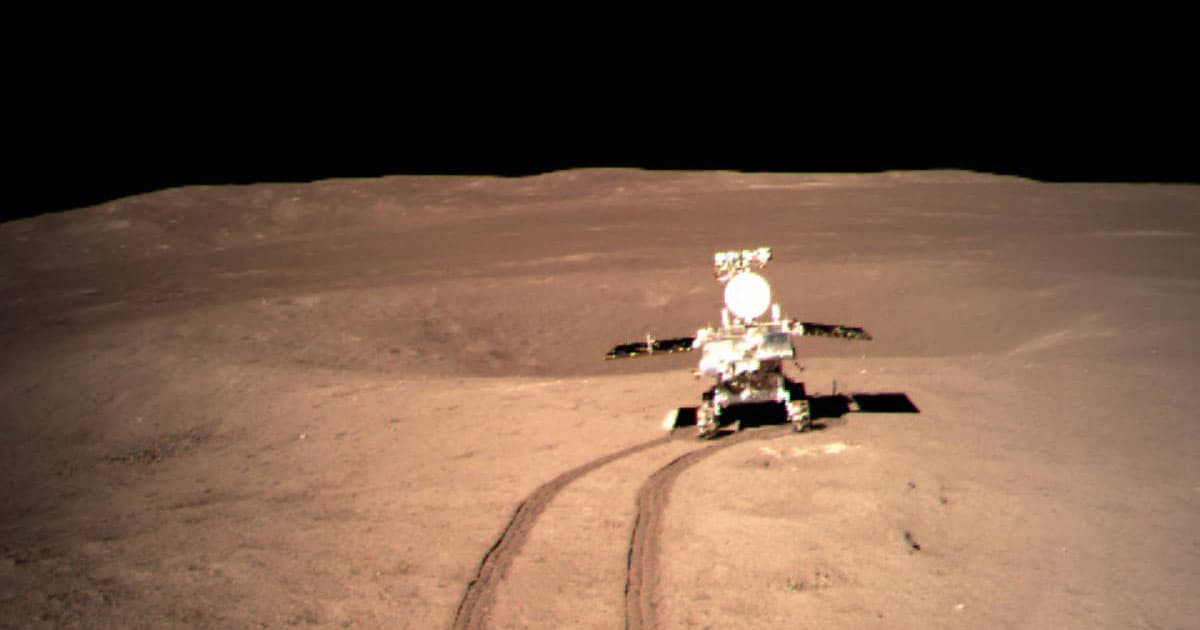 Could the strange "colored, gel-like" substance be glass formed by a meteor impact?

Could the strange "colored, gel-like" substance be glass formed by a meteor impact?

In August, Chinese lunar rover Yutu-2 discovered something strange on the far side of the Moon: a mysterious substance that the Chinese space agency referred to as "gel-like" and "colored."

And now, China's Lunar Exploration Program has released a new photo of the substance — shedding more light on what the strange substance could possibly be.

According to experts, it's most likely what scientists initially hypothesized: dark glass formed as a result of an impact — the same stuff American astronauts found during the Apollo 17 mission, Space.com reports. High velocity meteor impacts are able to pressurize minerals into shiny glass that can end up refracting light in surprising ways.

"I think the most reliable information here is that the material is relatively dark," Dan Moriarty, NASA Postdoctoral Program fellow at the Goddard Space Flight Center told Space.com. "It appears to have brighter material embedded within the larger, darker regions, although there is a chance that is light glinting off a smooth surface."

Previously, Yutu-2 struggled to get a closer look since the strange object was at the bottom of a crater.

The lander is about to wake up from its two week long, lunar night cycle slumber. Perhaps then, we'll be getting more answers.

READ MORE: Here's What China's Yutu 2 Rover Found on the Far Side of the Moon (Photos) [Space.com]

More on the substance: Here Are New Pics of That Weird Substance China Found on the Moon

Moon Sims
Brutal Video Simulates When Earth Hit Another Planet Many Years Ago
10. 6. 22
Read More
Whack-an-Alien
Chinese Scientists Say They May Have Detected Signal From Extraterrestrial Intelligence, But Probably Not
6. 14. 22
Read More
Make It Rain
Scientists Say They Caught China Successfully Changing the Weather
12. 6. 21
Read More
+Social+Newsletter
TopicsAbout UsContact Us
Copyright ©, Camden Media Inc All Rights Reserved. See our User Agreement, Privacy Policy and Data Use Policy. The material on this site may not be reproduced, distributed, transmitted, cached or otherwise used, except with prior written permission of Futurism. Articles may contain affiliate links which enable us to share in the revenue of any purchases made.
Fonts by Typekit and Monotype.