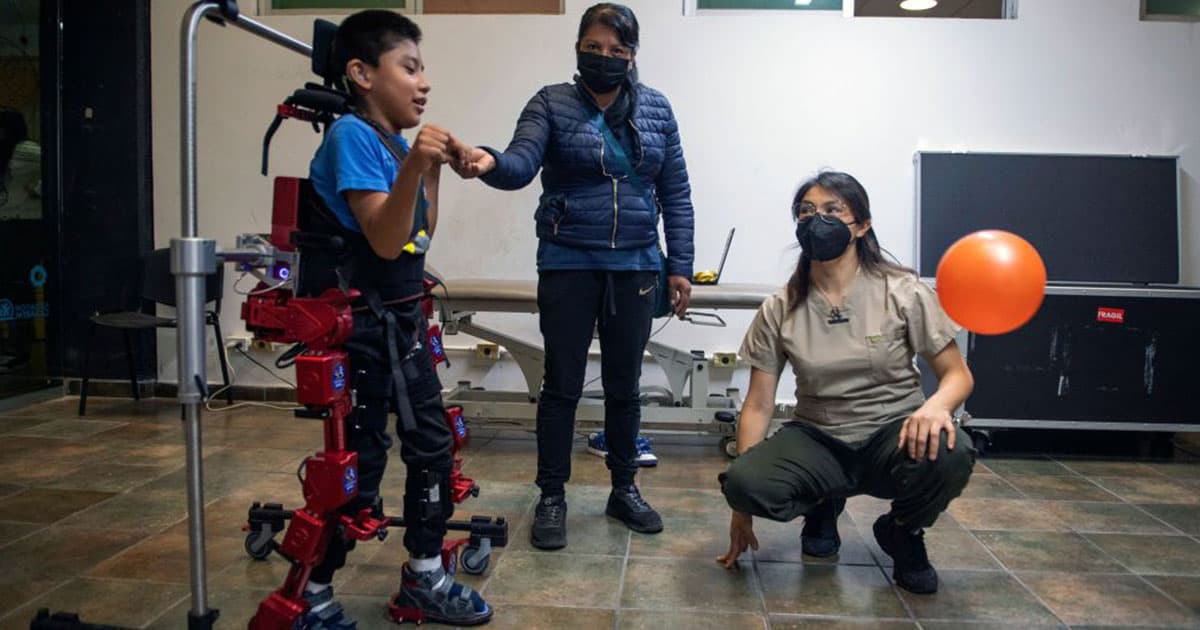 A titanium robotic exoskeleton is helping an eight-year-old boy in Mexico learn to walk after being wheelchair-bound for most of his life.

The boy, David, suffers from cerebral palsy, a group of neurological disorders that surfaces during early childhood and hinders a child's ability to control their muscle movements. In effect, it makes it extremely difficult for an affected child to walk and maintain their balance and posture.

As you can imagine, rehabilitating a child with cerebral palsy is a long and arduous process. But now, David's speeding up his rehabilitation with the help of the battery-powered Atlas 2030 exoskeleton, developed by award winning Spanish roboticist Elena García Armada.

According to the European Patent Office, it's the "world's first adaptable robotic exoskeleton for children."

Even with just a handful of physical therapy sessions with the exoskeleton so far, it's already making a massive difference.

"At first it scared him and his hands were very tense, and now I see that he's already holding the marker pen and starting to draw or (play with) the ball."

The Atlas 2030 exoskeleton earned its creator the 2022 European Inventor Award. It works by supporting a child's lower torso and strapping their legs to the exoskeleton's robotic ones.

Children further along in their rehabilitation can potentially walk in it almost without any external help, but in David's case the exoskeleton was guided by a hanging trolley.

For physical therapists, it's a game changer.

"It makes us very excited to have the exoskeleton and that we can even use it now to achieve all of this," said physical therapist Arturo Palafox Sanchez, as quoted by EuroNews.

The Association for People with Cerebral Palsy (APAC) in Mexico says it hopes to help over 200 children suffering from cerebral palsy across the country with the device.

According to APAC director Guadalupe Maldonado not only does the exoskeleton help reach rehabilitation in "record time," it also boosts the children's morale, EuroNews reports.

And that, friends, is worth its weight in titanium.

More on exoskeletons: Scientists Show Off "Wearable Muscles" You Can Strap on to Get Way Stronger

Amazon's CEO Just Demoed the World's First Manned Bipedal Robot
3. 22. 17
Read More
It's Big, it's Robotic, and it's Pretty Cool—Check Out This Giant Mechanized Exoskeleton
1. 7. 17
Read More
Pizza Personnel
Domino's Buying Hundreds and Hundreds of Electric Delivery Vehicles
Wednesday
Read More
+Social+Newsletter
TopicsAbout UsContact Us
Copyright ©, Camden Media Inc All Rights Reserved. See our User Agreement, Privacy Policy and Data Use Policy. The material on this site may not be reproduced, distributed, transmitted, cached or otherwise used, except with prior written permission of Futurism. Articles may contain affiliate links which enable us to share in the revenue of any purchases made.
Fonts by Typekit and Monotype.